Another Star from the PLN

When Brad Patterson challenged us to learn more about someone from our PLN I knew exactly who I wanted to interview.
I first came across Elizabeth Anne @eannegrenoble when I made a foray into the  BAW (becoming a webhead) area. Confession: I thought her name was double-barrelled and it took me ages to realise that Anne was her surname!
We met face to face for the first time at TESOL France in 2010, and have since kept in touch by email, skype and twitter. I love her sense of fun and her Yorkshire forthrightness. We shared a quirky room in the eaves of a Brighton hotel during IATEFL and enjoyed lots of fun with other members of the PLN, especially at Petra's Karaoke evening. (see picture) 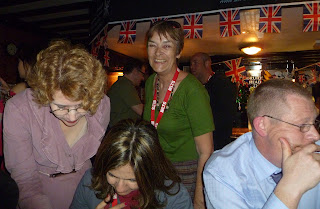 Here are some interesting facts about Elizabeth.
She comes from Yorkshire, although her father was Irish. She was disappointed to find out that her mother's family were English, and not Irish too, as she had believed for about 40 years. She teaches English to young scientists at University in Grenoble., where she has a fantastic website to help them. She is married to Michel Anne, who is a famous scientist in his own right. They met at a horse riding club at  university in France during her sandwich year abroad.
One of my students called me aTechno-geek the other day because  I am  always buying tech equipment for the department and the students look for me when they have problems with any of their technology. The next one would be Friendly. (She also said that she was sometimes  a bit Disorganised, but that her students didn't mind.) It's difficult to come up with another - I think you would have to ask them. As our courses are 18 or 22 hours long, it's hard to get to know everyone.
Normally I keep things for a quick sandwich in the fridge - pate,ham, cheese and salad ingredients, especially tomatoes and cucumbers; I love cucumbers despite the bad press at the moment. I never keep my fruit in the fridge. Today though we're having friends round to dinner, so there is filet mignon, cream and mushrooms. Yummy!
I was surprised at the answer to this question. I thought that she would have been a research scientist as she studied Physics at University and teaches scientists. I have always wanted to be a teacher. I used to set up stones when I was little and try to teach them! I was good at physics at school so it was suggested that I study  at university- they told me that Physics at Uni was fun!  But I never planned to be a scientist, I was always going to get into teaching.
That's an easy question . University administration is top of the list. All the decisions are made by bureaucrats who haven't got a clue about what goes on for real. The four universities in Grenoble don't work well together, except on paper, and the English department is  just about accepted as a necessary evil in a science faculty.
I read anything that people give me. Good detectives series  are my favourite, and I like Ian Rankin's Rebus.  I've just finished The little Strangers by Sarah Walters, and I'm also dipping into a Scott Thornbury for work.  I have a  strange technique when I read books. I read  the beginning, and then the end.  Then I decide if it is worth reading the middle bit. I know it's a bit odd, but it works for me.
I don't really go to the cinema unless my daughter takes me. I did see Pirates of the Caribbean, which was on the BBC recently. Both films 1 and 2 were on.
I Love West side story, and cry every time Tony dies. I've seen it at least 5 times. You would think that I'd be expecting it by now :-). 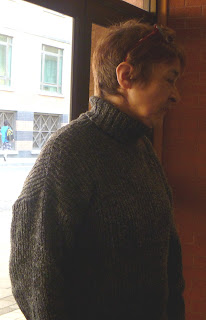 It's almost the end of term and Elizabeth is chasing up the students who haven't finished their work  and still expect a mark! She is also looking forward to her holiday in September. Now that her 4 children have grown up she sometimes has some of her 5 grandchildren to stay and doesn't often get the chance to take a proper holiday. She and her 5 sisters, yes FIVE, have organised a short break in Ireland with their respective husbands. Her Michel is supposed to be retired, but he is very much in demand and keeps promising to settle down.

Thanks, Elizabeth, for being up for the interview and I hope you get some time to chill out soon.
Posted by Unknown at 20:14