With the Tesol course finished, I've had time to get my life back to normal. This week I've been out and about with my students, looking at lots of quirky things about the island. The weather has been bright and sunny, but much colder than last week, even if temperatures are more normal for the time of year. We haven't had the snow that has hit the North, luckily, as the sea is beginning to warm up.
Sunday April 1st 2012 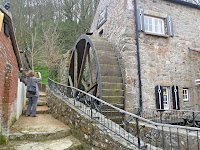 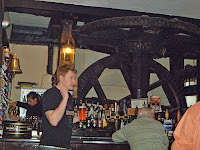 This is an old water mill, the Moulin de Lecq. It has been around since the 13th century, and is now a decent pub and restaurant, where you can find a good Sunday lunch. Sometimes there is enough water to see the wheels turning, but at the moment they are dry. See the internal workings behind the bar.


Monday April 2nd 2012
After an interesting CPD session, we had the afternoon to ourselves. I took a couple of my students into town and we stopped en route to look at a couple of interesting Jersey things. The first is our yellow telephone box. There are not many left, as most people today have access to a mobile phone. What colour are the boxes where you are? 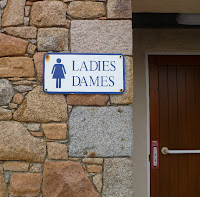 The second picture, of the toilet sign, was something I take for granted, but which shows the bilingual nature of the island.

Jersey has many beaches,  all with their own character. Depending on the wind direction, there is always a sheltered spot. If you have a favourite water-sports pursuit, you would choose a particular beach. Some of the beaches have pebbles, some have sand and some have a mix. The beach at Greve de Lecq, on the North West coast, is red, because of the eroding rock faces. Further round is a beach covered in stones and then we have beautiful white sandy stretches.


The other day I was here on my island tour. This is Devil's Hole. Credulous islanders were too afraid to go down to the water's edge because of the noise of the devil (actually the tide being forced through a hole in a rock). This made it easy for smugglers to use the bay for their trade. A large statue of the devil was placed at the bottom of the path and people used to go down to have a look. The newer incarnation is at the top of the path, in a pond. It is also enormous! This stops the idiots from being able to move it around.
Thursday 5th April 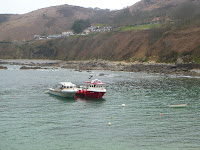 A visit to Bonne Nuit Bay allowed me to take pictures of these hang-gliders. They were having a fantastic time above the cliffs. On the other side of the bay is Fort Leicester. 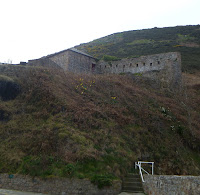 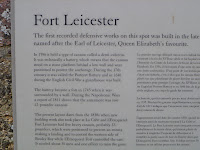 Friday 6th April
Today is good Friday and I have to work as normal :-( My husband offered me a lift to work so that he could keep the car. We had some hot cross buns for breakfast before we set off. On arrival at work I had to dodge all the chocolate flying around. It was a colleague's birthday so he brought in chocolate, Good Friday produced chocolate cakes and eggs, and the Swiss students gave their teachers some chocolates as a farewell gift. Not a good place to test the will power of someone on a diet :-) 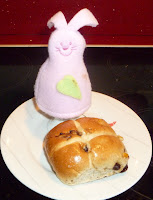 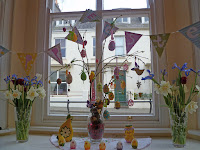 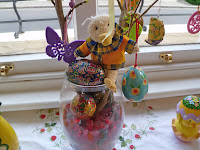 This morning I decorated our window for Easter. The  thing about having a bay window is that every tourist stops and looks in. Putting things in the window gives us a bit of privacy, and it looks fun too.

I have spent the afternoon trying to help my  young daughter. She is in Paris and has fallen foul of pickpockets. Unhappily, the British Embassy is closed for the holiday, and it is difficult to transfer money to her. She has managed to meet up with a friend who is able to help her get home, thank goodness. I was about to put out an SOS to my PLN!