Not my favourite week of the year! This week was full of unpleasant things, as the photographs will attest :-) 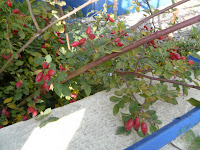 The start of the final week of training for the year. Today I spent most of it indoors, doing housework and answering progressively more demanding emails from my trainees. It was still reasonably warm, and I was delighted to see the rosehips in the garden next door. I remember having rose-hip syrup as a child in Scotland. My mother used to give us a spoonful before we left for school as she reckoned it was full of vitamin C.
Monday 22nd October 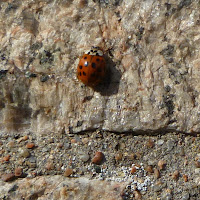 19 degrees today and we had to keep the window of our classroom closed. We had a plague of ladybirds- not the nice red ones- but the red and black ones with odd numbers of spots on them. We were squashing them against the wall whereever we could. They got in to everything, down our clothes, in our lunches - euggh! Here is one that escaped! 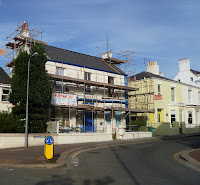 It looks as though we have started a trend in'doing up your house'. Our next door neighbours have added scaffolding and it looks as though they are having their walls hacked about a bit. They are a block of flats, though, so it will be less expensive for each of them than ours was :-(
Wednesday 24th October 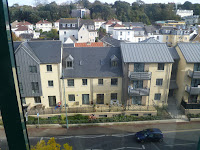 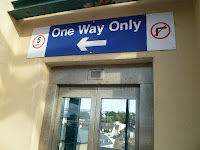 Almost all of the paperwork is in and I have time to take part in #ELTchat without worrying about all the things I should be doing. The nice thing is that I managed to get home from work at a reasonably sensible time for the first time in a couple of months :-) The lift in the car park has sprouted signs which made me smile. I'm not sure it would be a good idea to follow them exactly. The view from the lift is bright and sunny and the new houses are now all full of tenants.

Thursday 25th
This morning we were given the news that one of our much loved colleagues lost his fight against cancer last night. My colleagues are sombre and even the students are subdued. His wife works with us too, so our thoughts are with her and their 12-year-old son.

I had a bit of a panic when my watch stopped working, as I needed to pick the moderator up from the airport later today. I popped up to the supermarket to buy a dinky little alarm clock, much to the amusement of my trainees. As they pointed out- I am reasonably tech-savvy, so why didn't I think to use my phone? Never mind. The little  clock will actually be  quite useful.
Friday 26th
Moderation day! The lady from Trinity is lovely and will put my trainees at ease. It is freezing cold-but dry. I will have time to contact some of our old teachers to pass on our sad news. Many of them live far away, but I'm sure they'd like to send a card or something. 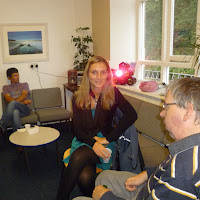 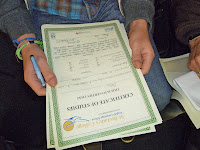 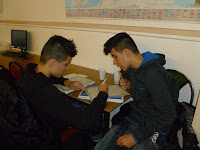 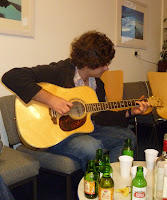 After lunch the examiner returned to the airport and we could then have our party for the trainees and their students. Jack brought his guitar along, and some of the students played and sang songs in their language. It was quite a jolly affair. We always give our students a certificate of studies at the end too, which they are happy to receive. We then went down to the local pub for a tennerfest meal and a celebration of the end of the course. As Tam is returning to Scotland at the end of the weekend, I offered to show him around the island, but was pipped at the post by Siobhan who had offered first :-). 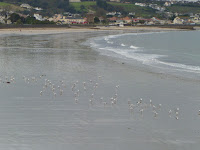 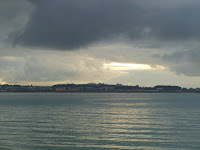 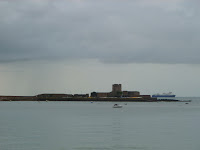 I started to write the #ELTchat summary and had to abandon it to drop my daughter at her friend's house. The view of the beach was stunning as we passed, so I stopped to take a couple of pictures and  found it was covered in wading birds looking for food. We were early enough that we saw the ferry leaving for France.
Posted by Unknown at 21:54