What a wet week! I left home in the rain, went out in the rain and went home in the rain. There were dry periods in between, and it hasn't been like the weather in the Uk, but-blehhhh!
I feel sorry for Tam, who has come down from Scotland to do his CertTESOL, and was hoping to get out and about in between times. He won't have much time as the course warms up, but I hope that the weather will be kind to him when he does.
Sunday 30th September 2012 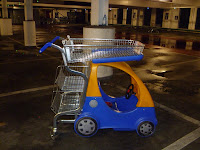 The supermarket near me has been very clever. It has invested in some trolleys with little cars on the front. That way the child is occupied while the parent does the shopping:-). It has resulted in many young families changing their routine, and going to that supermarket instead of one of its rivals- shrewd marketing! 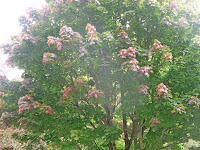 This year is just flying by. My new course started this morning- I haven't got the measure of them yet, but they are very different trainees from the last group. My timetable is a bit different too. My colleague is doing the Unknown language input after lunch, giving me a 2-hour me-time :-). Unfortunately, it has been wet, and I haven't wanted to go out much. The tree outside, which is my calendar, is beginning to change colour now. It will be glorious when it is completely done. None of the neighbouring trees have shown any sign yet of Autumn. 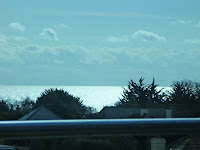 I lost one of my trainees today, through ill-health. I think you need to be physically and mentally fit to do a training course which is so intensive. The others are fine, beginning to suss each other out and make friends. Today I had time to go to the local supermarket cafe for lunch. The Bulgarian chef was pleased to see me again, and gave me a table by the window, where I could look out- high up over St Brelade's bay bay. The difference between the water and the sky was very clear as the sea looked almost silver.
Wednesday 3rd
﻿ 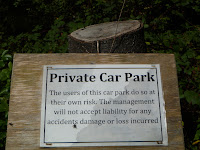 I had time for #ELTChat this evening, which was excellent! Knowing that the trainees would be tied up for a large part of the next day, I volunteered to write the summary. I'm really looking forward to Marisa's Greek lessons- and then I'll have a holiday in Greece to test out my new language skills :-).

This sign has gone up in the car park of the college.
A while back, one of the trees fell down on the teachers' cars and so now we can park, if we want, but......  You can see the trunk of the one that came down.

One of the trainees practises yoga and stress-busting techniques, which he was sharing with the others. This could be a very handy trick to have for the next few weeks. Here are a few of them trying out some of his 3-minute techniques. I hope that they will make use of them during the month:
Friday 5th 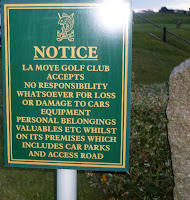 Ages ago my husband signed us up for the Church of Scotland Annual Quiz Night. It is organised by a friend of his, who was collecting together a team to take part. M and his friends decided that they would volunteer to do it, so the wives were roped in too. It took place at the posh golf club of La Moye which I have never been to before. Fortunately for me, it was on the West of the island, as the early start would have made it difficult for me to get there on time. The golf club building is nothing special, but the setting, in the dunes above St Ouen's bay, is out of this world. 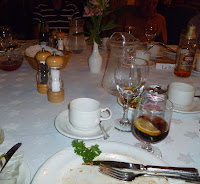 A normal, domestic day, for a change! We did some housework, and then I wandered down into town to have lunch with friends. Cairis had lunch planned with the members of her course who are still on the island, as they will all be off shortly. Unfortunately, they changed their plans at the last minute, so she came into town with me, instead. M met up with us afterwards and we went out to look at bedroom ideas. We are thinking of changing the layout of the house to make it work better for us.  We  might annex Cairis's upstairs bedroom as our office when she goes overseas. We will give her the one downstairs, and turn it into a granny flat, so that she would be independent whenever she came home. We could then think about becoming a host family for the college when they get busy in the summer. I had a wedding to do in the evening. It was back out  West again. I sometimes wonder whether I should just have a bed at the college! This time the venue was opposite the lighthouse at La Corbiere. Unfortunately, although it has the potential to be amazing, it rained hard all day, and I drove down there in a drizzle which obscured the view :-(. The family of the bride were hospitable Irish people and the evening was a great success, despite the weather.