The weather has been kinder this week. It was like the 'curate's egg' - horrible in parts! Still lots of teens in the college as it is half-term in Europe. We've been trying to get organised for our annual holiday, which requires a week to prepare for, and another week to unwind at the end:-)
Sunday 4th November 2012 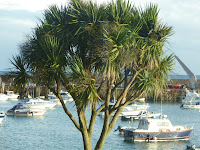 Popped down to Carl's house for a Band meeting. Last year we had breakfast at St. Helier Yacht Club and our meeting took place then. This time it was easier to pop down for afternoon tea. I like Carl's house. He is an artist carldanbyartist.weebly.com as well as one of our musicians, and he lives in a house with 360 degree views of the harbour and castle in Gorey. Outside his window is a lovely palm tree. It is nice to still have greenery around in the wintertime, and the other trees have been losing their leaves because of the wind. Of course, we didn't get everything done, so we'll have to go back next week :-) 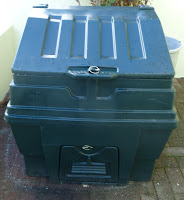 ﻿
Guy Fawkes NIght, although most people had actually celebrated at bonfire night parties on Saturday night, so the place was quiet.
The island was cold over the weekend, so we decided to order the winter coal, and have it in readiness. Our big coal bunker got damaged while we were decorating, which was a good excuse to buy a smaller, neater one. It was delivered today, and quickly filled with coal. Unfortunately, it isn't where I wanted it to go, and now it's too heavy to move. I'll have to wait a while before it is empty enough to shift it :-(  Note the traces of coal dust in front of the bunker... 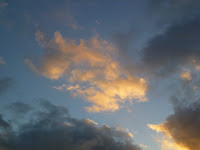 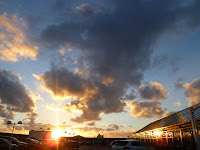 I gave some of my students a lift into town on my way home, and one of them commented on the cloud formations. I really take it for granted that we have stunning clouds, so I decided to take a picture after parking the car. Sofia is right, though, they are beautiful :-)
Wednesday 7th November 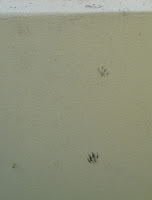 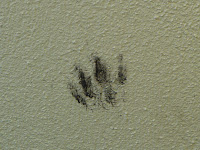 I've got a student in one of my classes this week who is as mad as a hatter- nothing we do pleases her, and she thinks she is the only person in the class who counts. She has complained every day so far and my colleague and I are ready to suggest that she have private lessons! Thank goodness it's #ELTchat day- always good to take your mind off things.
When I arrived home I was not impressed to see that a cat, hopefully not one of mine, had scaled the wall, after wading through the coal dust!
Thursday 8th November 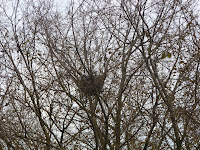 Well, nearly the end of the week. Student still grumpy- teachers miserable! No winners here! My other classes are perfect, thank goodness, but it is always the awkward one which sticks in your head, isn't it? Th trees outside are starting to look bare, and the birds nest are now visible. They are fascinating, when you look closely. I wonder who built this one.
Friday 9th November 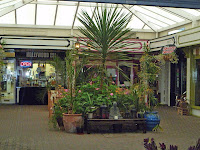 Time to go to the hairdresser's before my holiday. She has moved from the salon round the corner to an arcade in the centre of town. It works to go on my way home from work, as I can park and walk there easily. Polly says that the arcade is a lovely place to work, as there is always something going on in the other shops . I like the fact that the florist decorates the front, drawing people in from the street. Off to the pub with the gang tonight. It will be good to catch up, although some of us will see each other tomorrow when we go back to Carl's house :-)
Saturday 10th November
Spent the morning catching up with the housework, and dug out the suitcases for next week. In the afternoon I had a coffee in the local supermarket with my girlfriend. We won't have a chance to do it for a while as I'll be in pastures new :-) This is a very long standing arrangement, so we try to meet up whenever possible. Later, I went back down to the East of the island, for our band meeting. We are going to be without our lead musician for our next ceilidh, so we had to plan who would start the tunes and how we would finish them. I took a couple of pictures out of his window- just because the view is fantastic!
Next week will be a bit shorter. I plan to blog up to Thursday, as I'm flying to London, then Paris, on Friday. After the weekend we are heading off to Valencia for a break, so  two weeks later I will be back with all the up to date information and photos.
﻿
﻿
﻿
Posted by Unknown at 12:03