Well, here we are again- twice in one week:-) This week was very much confined to the house, partly because the weather was cold and miserable, partly because I wanted to get everything straight for going back to work, and partly because my new computer needed so many programs added to it that I had to sit for hours in front of it.

Sunday was miserable. It was a trial to go out and get my flowers- but there were some Alstromeria, as well as the usual spring flowers, so it was worth going to buy them. I dropped my daughter off on the way. She has taken up Roller Derby, which sounds like good exercise, but a bit rough. Luckily she got the skates, helmets and pads for Christmas, so she started the season all freshly kitted-out.

Monday, nice start to the week- washing, ironing..... bleh! Well it had to be done :-) I did  some of the Evo tasks and caught up with all the TV programmes which have been waiting for me in the planner. Cass was complaining that there wasn't much storage left for things that others might like to watch. I don't often have enough patience to watch programmes and do nothing else, so I often check facebook, read emails or something at the same time :-(

#ELTpics was collecting pictures of bookshelves, of which we have a few in our house. Thank goodness we all have Kindles too, or we would be overrun with books. On the left, is a little overspill bookcase at the foot of the stairs. The pictures on top were taken in the summer when my musician friends played for Amnesty International's fundraiser. The other one is the bookcase in my office, full of great reference books for work.


I had been looking forward to Wednesday, as #ELTchat was ready to start up again. If you haven't taken part before, it is a weekly CPD discussion on twitter, for ELT teachers around the world. One week we meet at 12 noon GMT and the next we meet at 9pm GMT. Maisie, who doesn't often come into my office during the day,  decide to help- or hinder! This time we discussed the rise of pre-packaged language courses, with their own textbooks and adherence to a particular style. I am looking forward to reading the summary.

On Thursday I offered to join the Parish crew who were clearing the growth in a local woodland. They do this a couple of times a year and use the land for wildlife to live in. Unfortunately, the bracken and other wild plants have a habit of taking over, so they need to be kept under control. The volunteers had a great time in the fresh air, and for once, it was dry!.

We went to the pub to play music on Friday, but I forgot to take my camera with me.Earlier, we went down to the Yacht Club to check on the organisation for Saturday's Burn's Night. There must have been another function on, because we had to park on the other side of the harbour and walk across. As luck would have it, it was low tide so we didn't get our feet wet.

Finally, Saturday arrived. I really enjoy Burns' Night, and although there aren't many Scots in the yacht club, the people are always enthusiastic and numerous. We had a great evening and the band were tucked into a corner by the window, where we could see the tide as it raced in. The music was crisp, and we had people on the dance floor until they asked us to stop at 1.00 am.  When I got home, my cat was delighted to see me. I read somewhere that cats become stressed when we fuss over them- but in my house it is the cats who solicit cuddles. Ebony always climbs up on her back legs to rub her face against mine when I come in. This picture was taken by Cairis at 1.30 am. She was still up- chatting to her friends on the other side of the world. 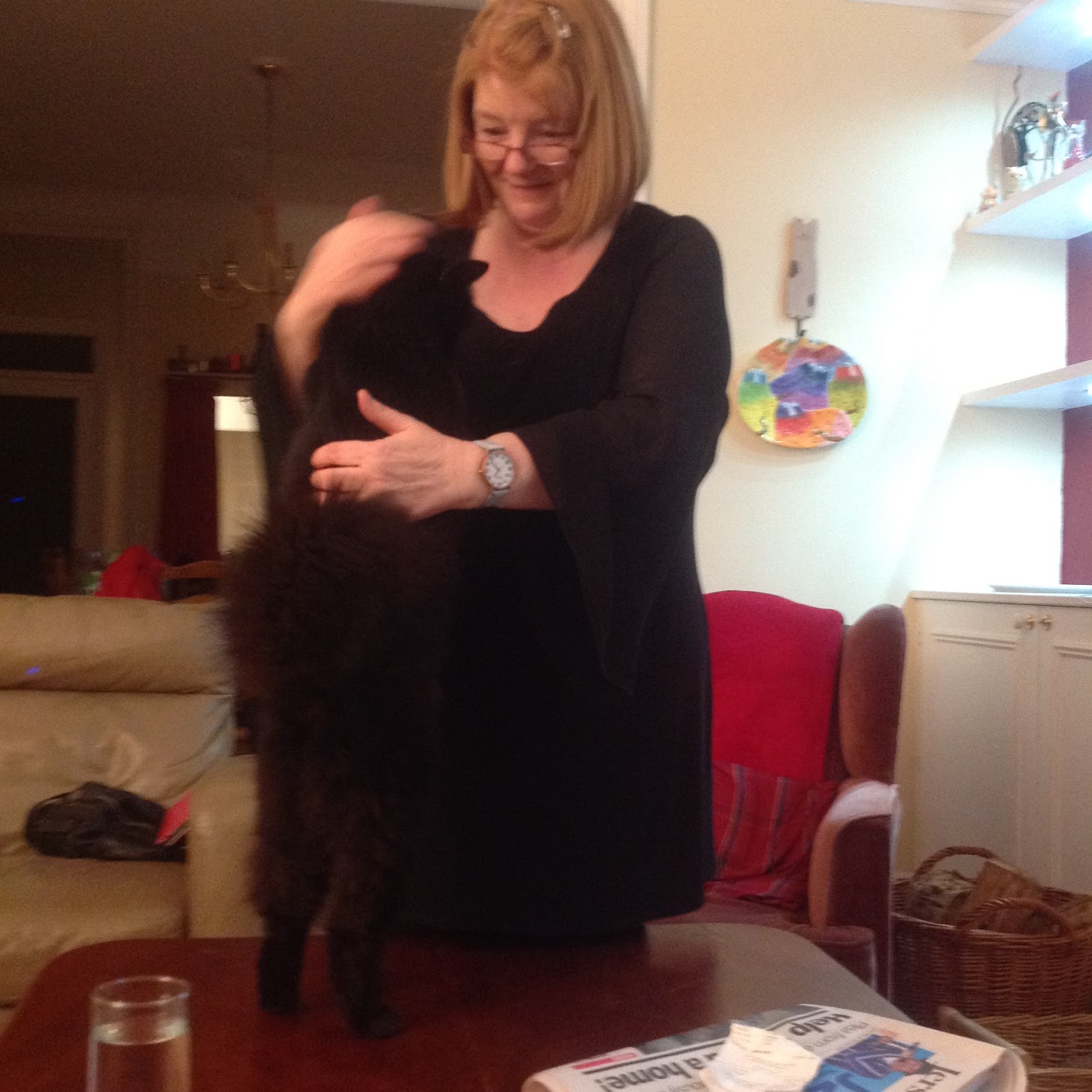 Well. onwards and upwards! I wonder what next week will bring. I'm back at work tomorrow, with a group of French catering students.They don't arrive until the afternoon, so they must be coming in on the ferry. That means that tomorrow will be a gentle reintroduction- and a time for planning and preparation, which doesn't happen often :-)
Posted by Unknown at 11:01