This post contains lots of holiday pics :-) We were able to get off the island for a few days, so the first week was spent winding down- and packing.
Week 22- 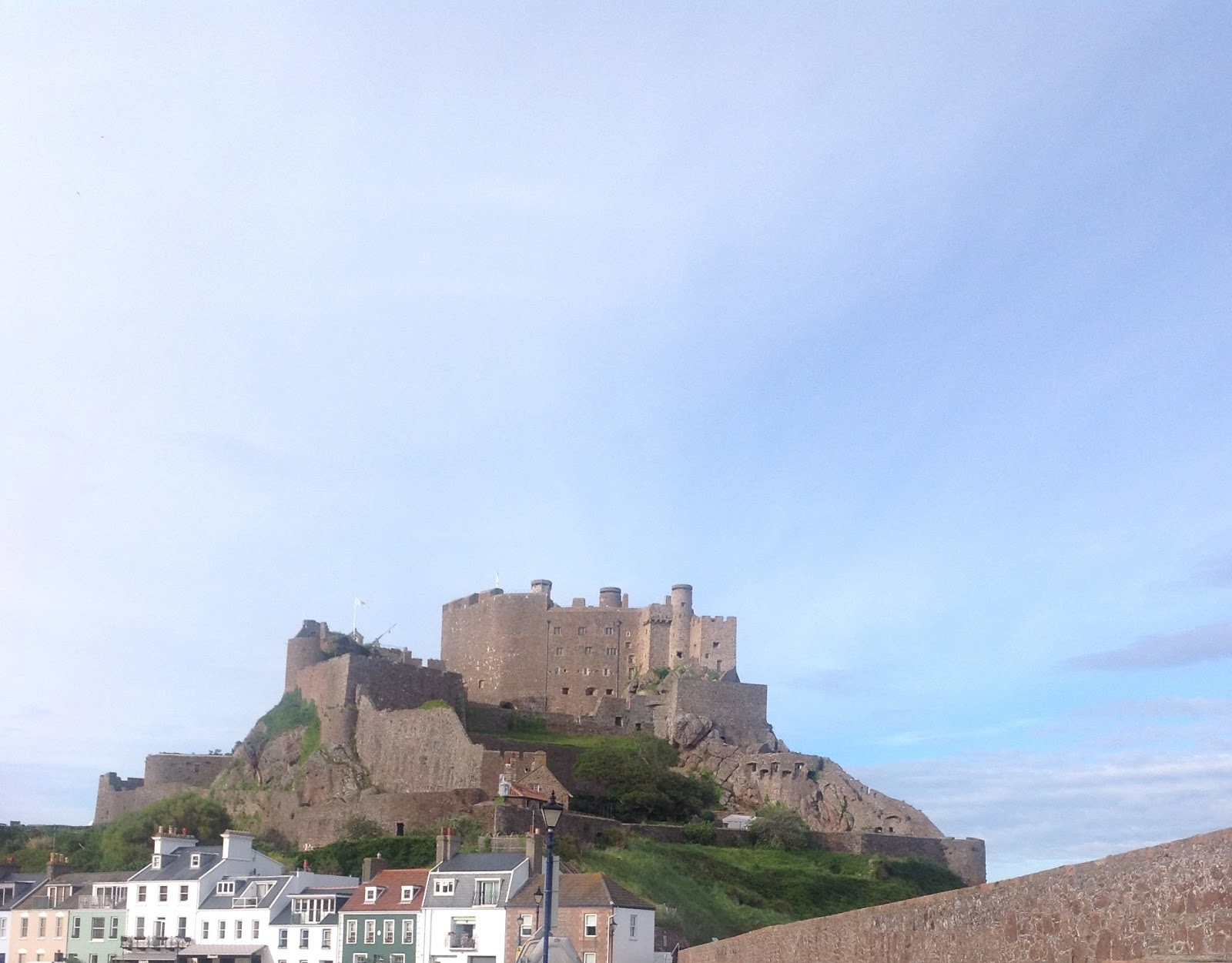 I had to pop down to help Carl with his computer again. He is really starting to get a bit forgetful. I love the fact that he has an upside down house, as the views from his living room are stunning. here is a picture of Mont Orgeuil Castle, which dominates the skyline.

I spent some time preparing the exam students for their speaking exam which is on Thursday. I'm sure that they will all be fine. My colleagues are getting ready to do a Mock for them too. It is a bitter-sweet time of the year. By the time I get back from my holiday, they will have finished school and I won't get a chance to wish them well before their written papers- and then they will go home- after several months!

Today is just a gardening day. The deck is finished and I did lots of weeding. I also noticed that the wall is very fragile in places. We will need to get a stone mason to look at it when we come back :( 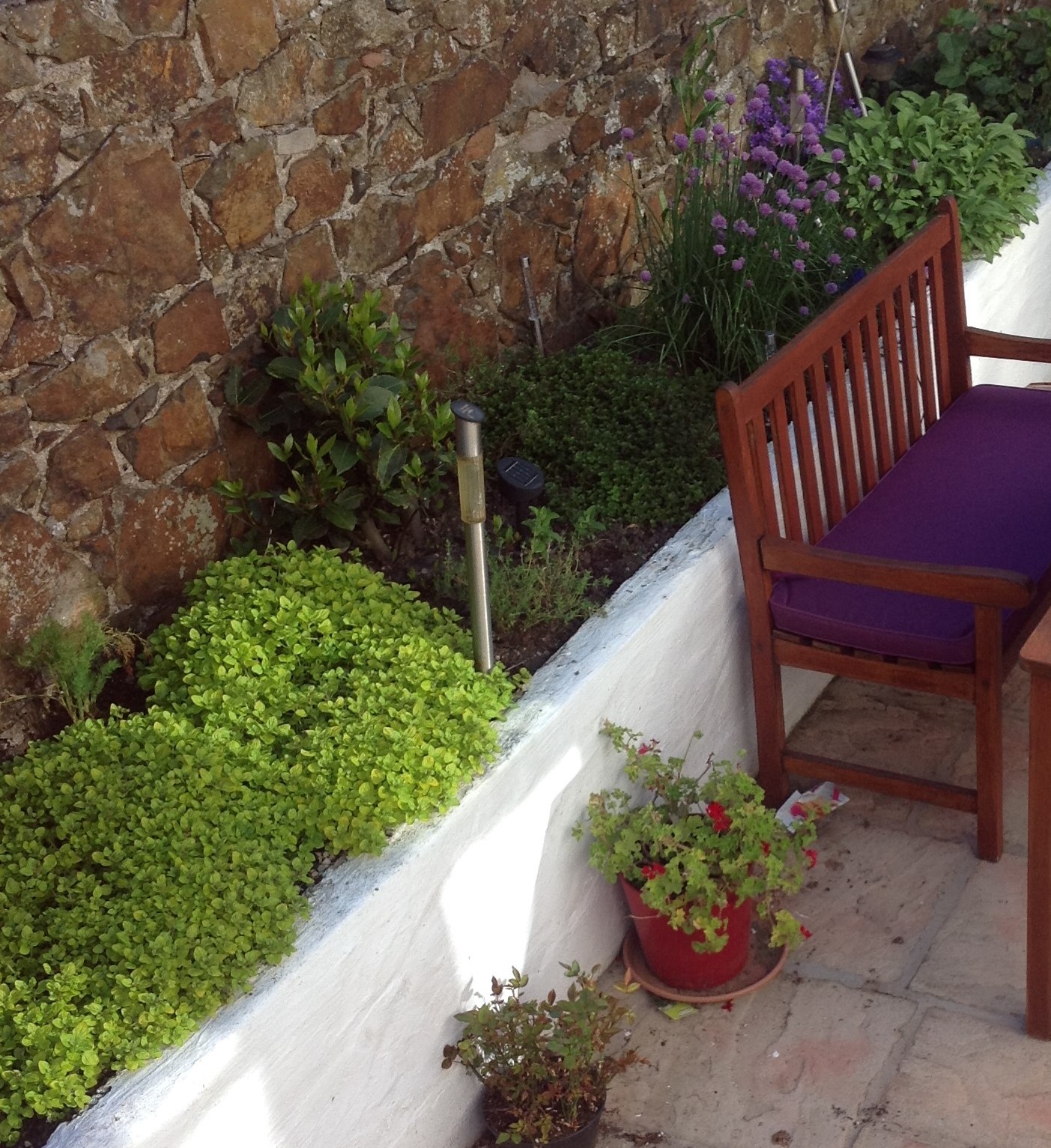 Last minute shopping to leave some food at home. Buy Euros, find passports etc. I always leave things to the last minute. You would almost think I don't like travelling. In fact I hate taking the ferry, as I don't like to be on the water. It's strange because my family have a boat and we always holiday near water- and live on an island :-) My in-laws were back for a few days to prepare their boat for travelling to France. We took them up to the pub for an espetada ( a Madeiran meal of meat or fish ( or both) on a long skewer).

A short day at work, and a bright sunny day. I had a lovely salad for dinner, using some of the herbs from the garden, as M was taking part in a sailing race and Cairis was at a BBQ.

Up early- and off to the ferry. We didn't have to hang around for long. I had my travel pills with me, but it looked like the crossing was going to be flat calm:-)
Once we got to the other side we stopped for a coffee, before setting off for the South. It took a couple of hours to get there and we quickly found our appartment/hotel with the use of our trusty SatNav.

We hadn't been to the Morbihan for several years, so we spent the day revisiting old haunts. We had to go down to Le Bono, as the  Voiliers Classiques were in port at the end of their weekend of racing. It looked like they would be having an amazing FestNoz in the evening, as the musicians were already tuning up when we arrived.

We always go shopping in the big Decathlon sports supermarket when down near Vannes. This time Cairis needed a new sailing jacket, as the neck of hers had perished. We decided to get it out of the way at the start of the week. We then visited Presque-isle de Conleau for lunch. It was a bit windy though- and the wind wasn't particularly warm! 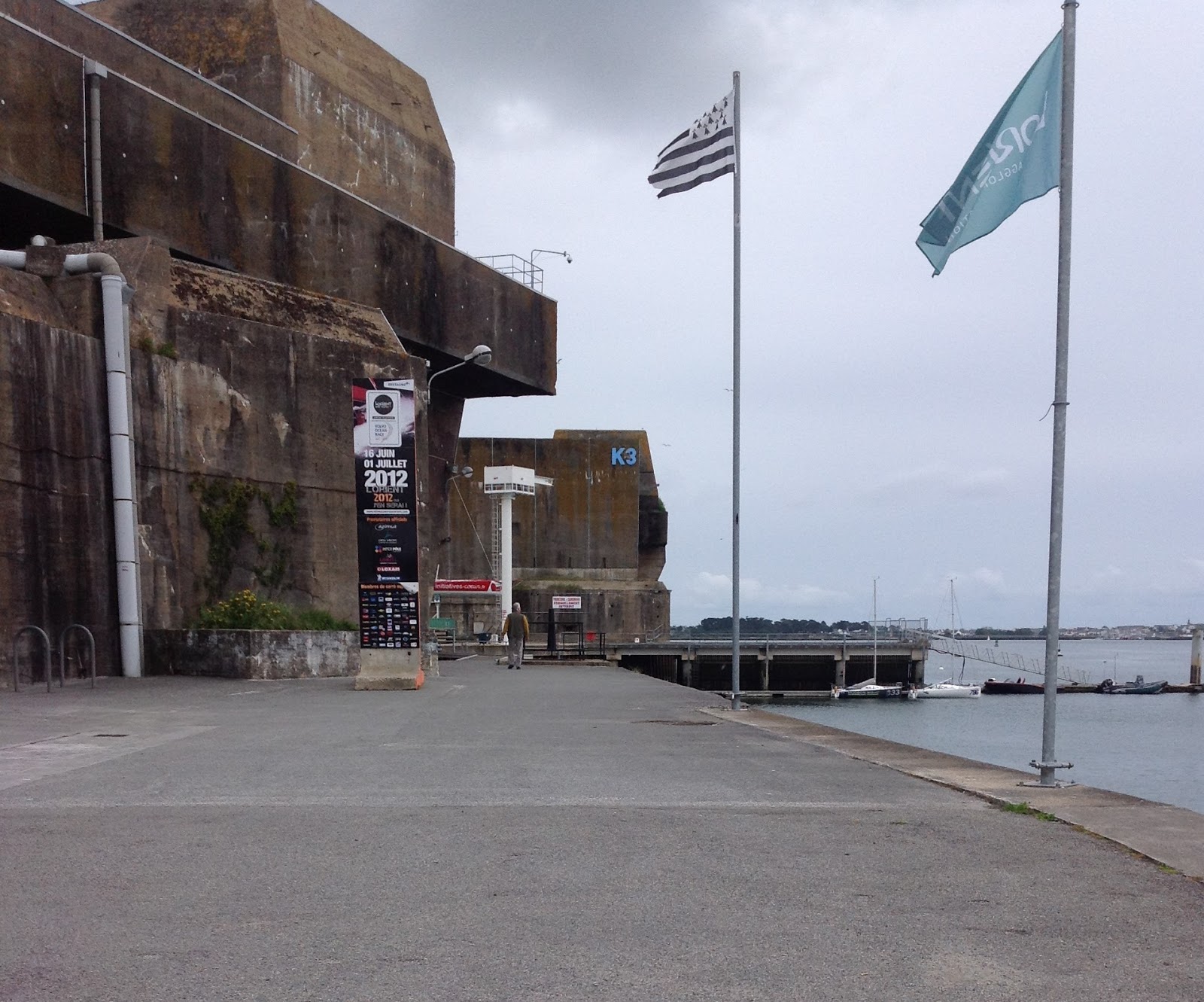 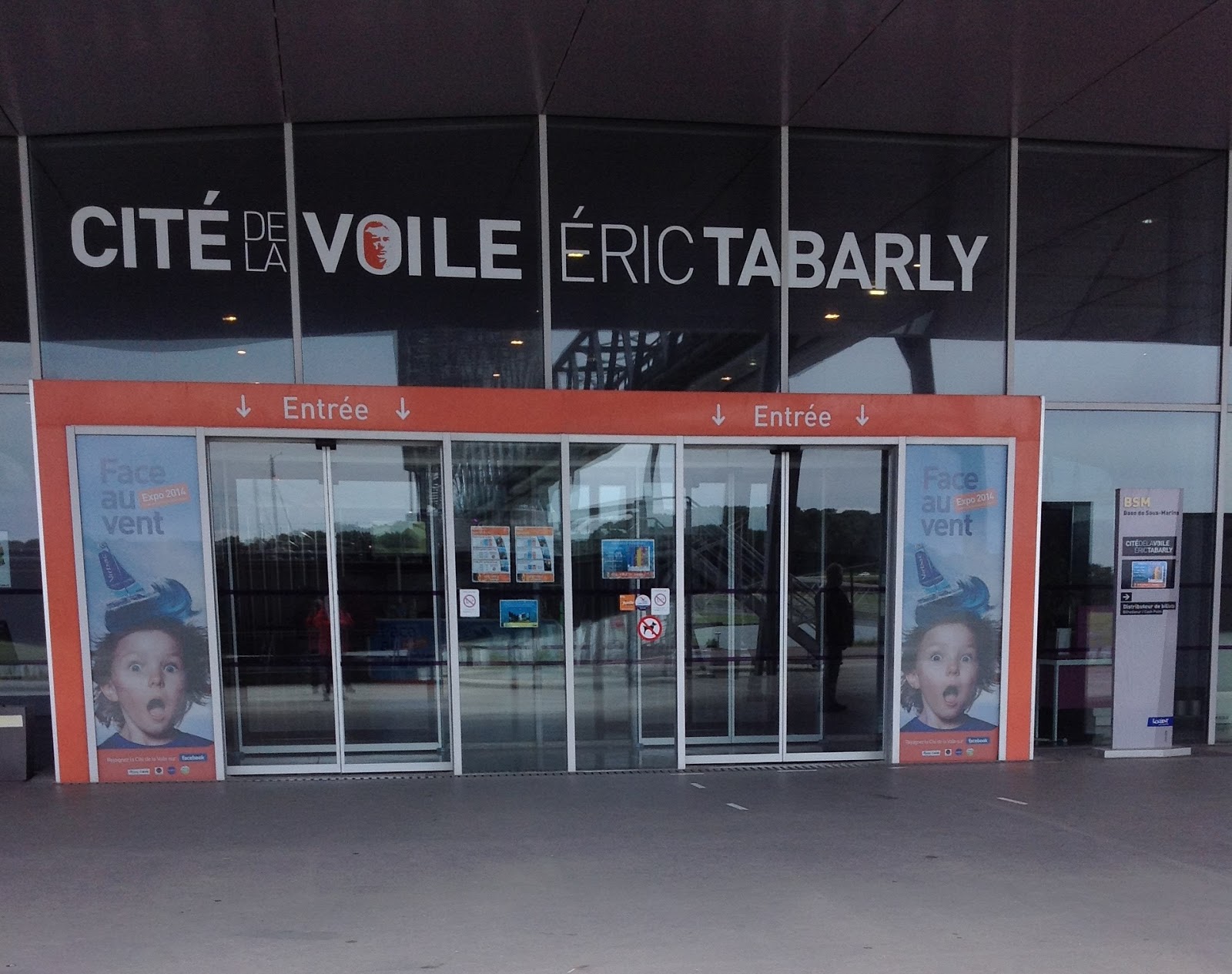 Today we decided to drive to Lorient. Every morning, the first thing I see when I wake is a long canvas wall hanging of Pen Duick. She was owned and sailed by an amazing Frenchman called Eric Tabarley. He lost his life when he went overboard while taking her to Scotland for a reunion of boats to mark her 100 year anniversary. In Lorient there is a museum dedicated to him, and all the races he won on six different boats called Pen Duick. They were each designed for different sorts of races. We were there for many hours. Even I was fascinated by all the information. The museum was built in disused submarine pens which are also home to other museums and a dock for world racing boats. The models of the six boats were in a case by the exit.

Today was Vannes Market day. We wandered around for a bit, and used the time to find the Brasserie we were meeting some people in later. I had made contact with an old student of mine, who suggested meeting up for dinner. We had a nice evening with her family and her English teachers, who she had thought we might like to meet. We had a look at the ramparts, which are laid out below in a series of beautiful gardens. We also found a statue to St Emilion- I hadn't realised that he was from Vannes. The city is beautiful, particularly the old timbered buildings.

We set off for Carnac today. I wanted to revisit the alignments of standing stones which I had seen many years ago. There are around 10, 000 stones in straight lines, which go on for about 4 kilometres. They start tall and diminish in height at the back. We did a tour in a little bus to get our bearings, and then walked around the site to take photos. It was just as amazing as I had remembered. 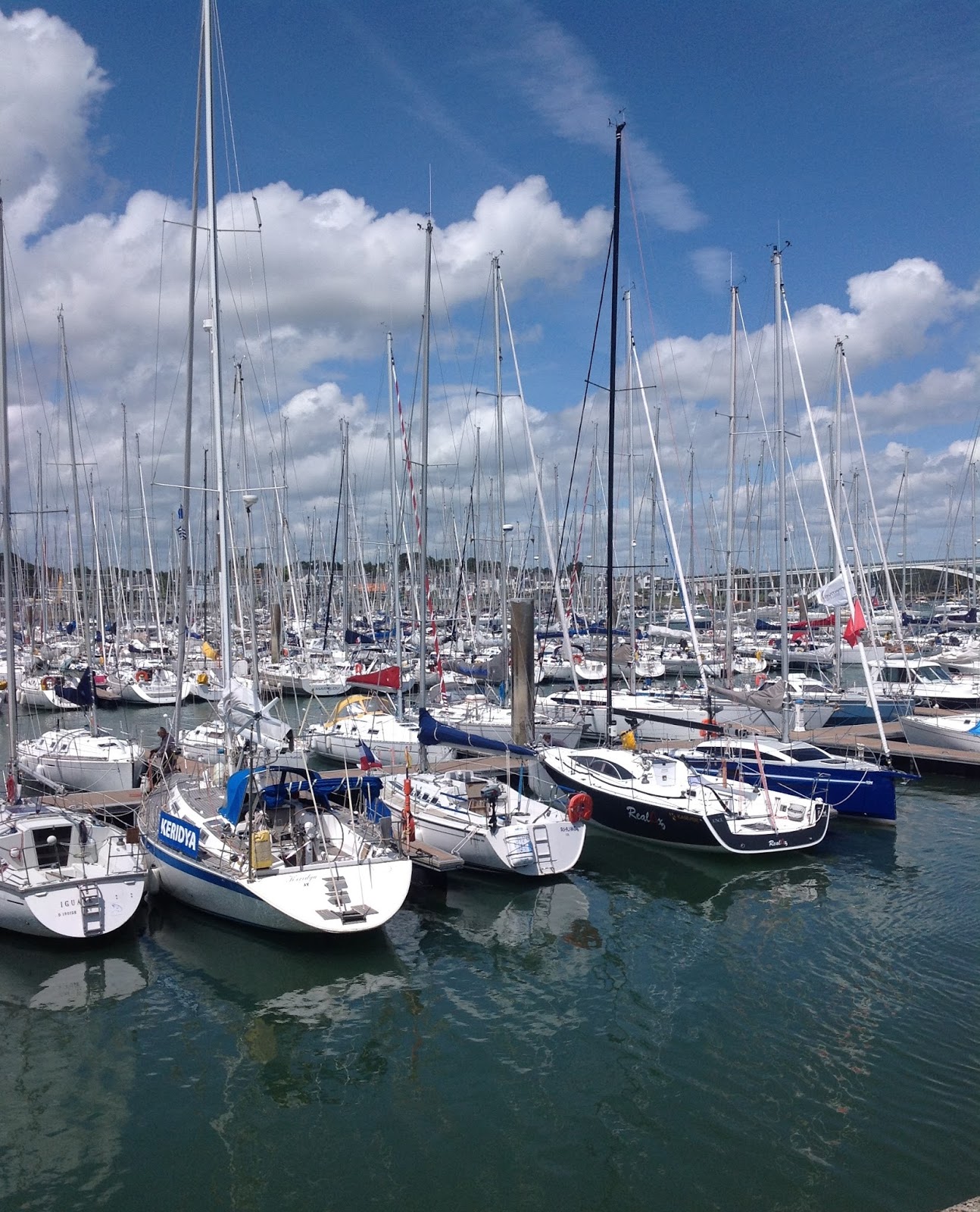 We then drove to the next town-  La Trinite Sur Mer, where the Eric Tabarley connection continued. This is one of the starting points for round the world races, and there were many famous boats moored. On the other hand- there were small day boats in one corner and the marina on the opposite side was full of yachts. 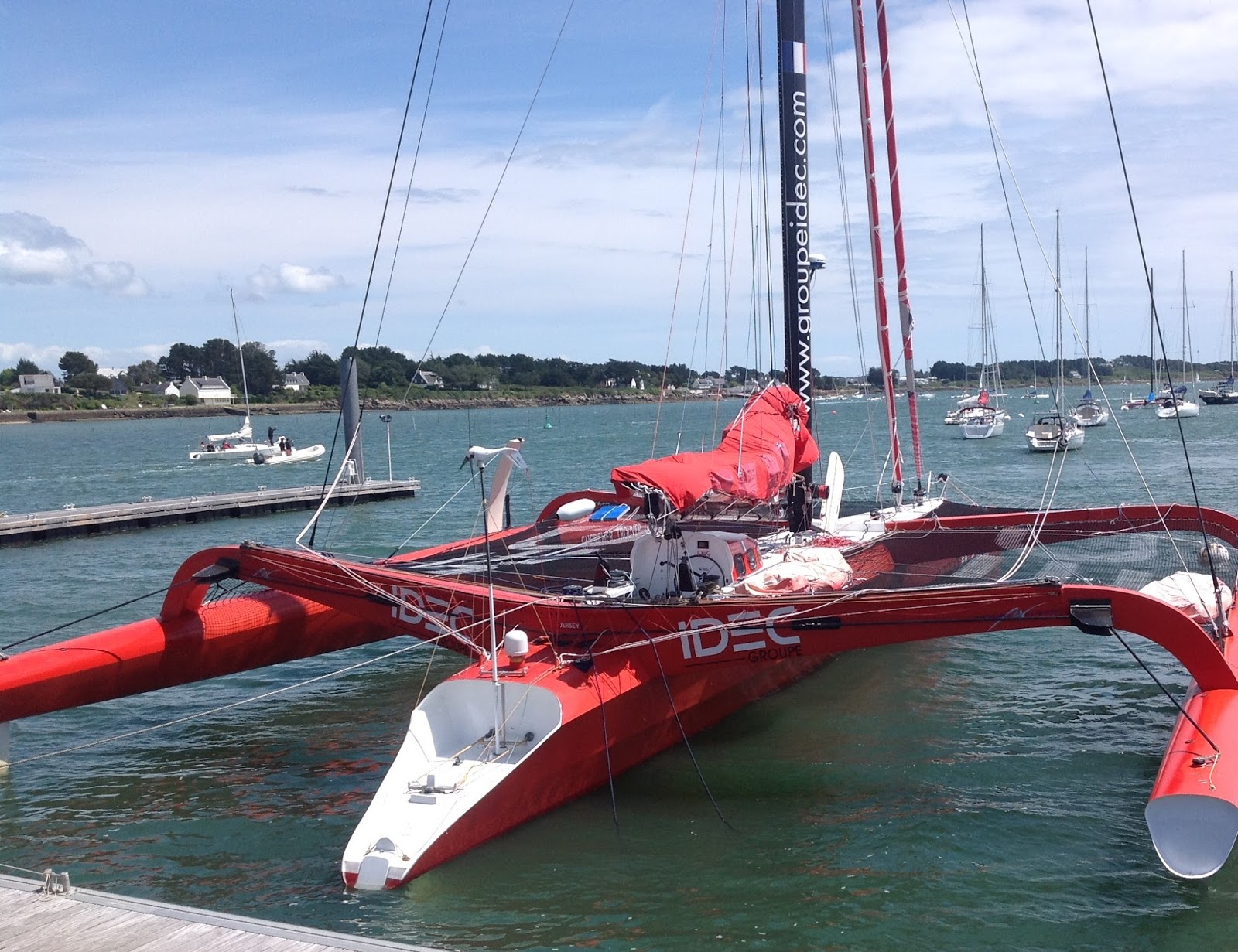 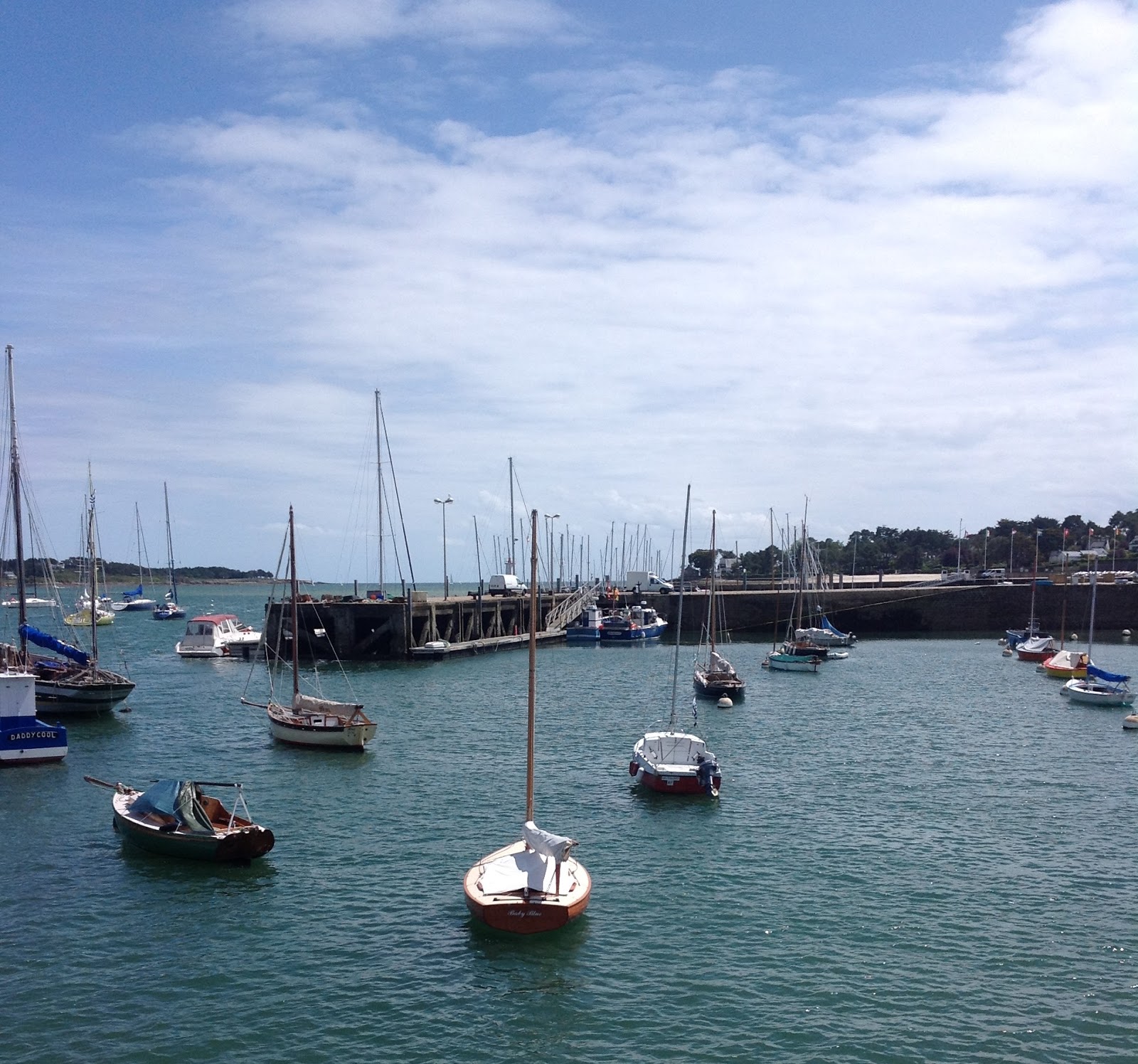 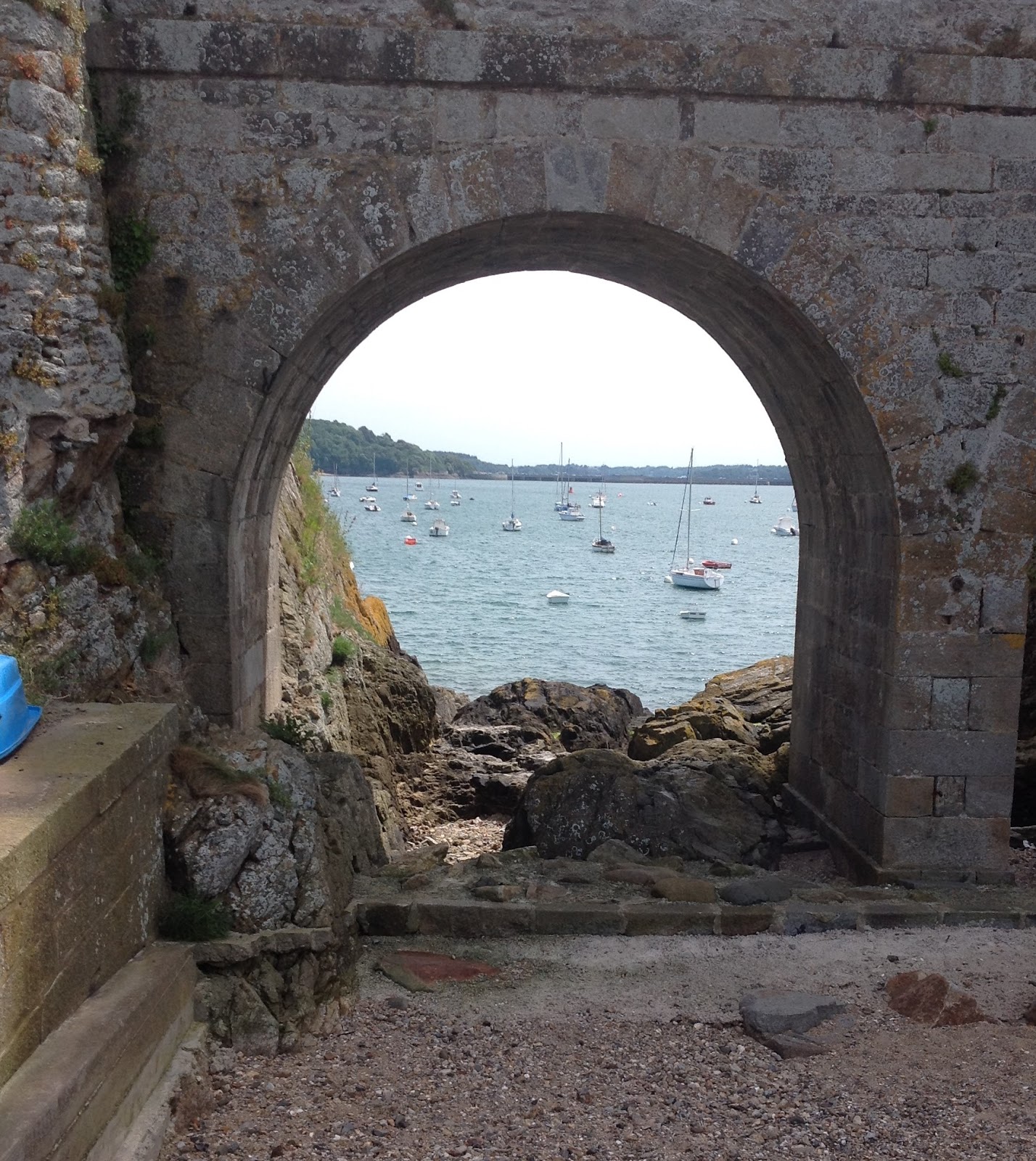 Time to head home. We drove up to St Malo, did some shopping, had lunch, had time to visit the Tour Solidor and finally drove onto the ferry. The trip back was again uneventful, and I read my book all the way across.

We unpacked, had dinner, and an early night. Ebony was delighted to have me home. Cairis said that she stopped eating for a couple of days, and then whinged all day, looking for me in every room. She now doesn't want to let me out of her sight :-) 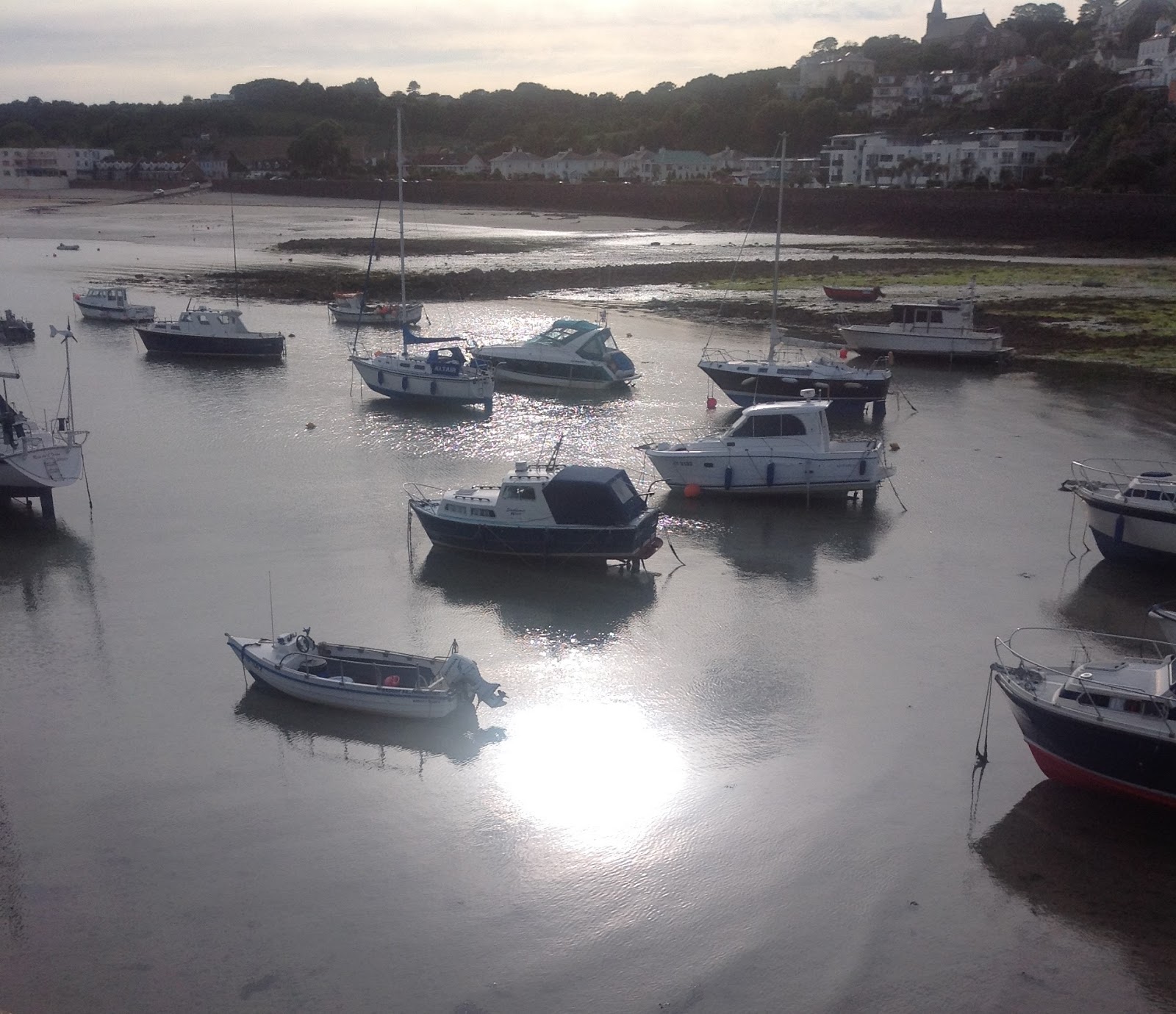 M is treasurer of the Jubilee Sailing Trust in Jersey. These are training ships for the disabled. Tenacious was visiting Gorey, and we had brought Carl a bottle of funnily-named whisky from France, so we decided to pop down to have a look. She had to anchor in deep water, so she was too far out to get a good picture  but I did a nice one of the boats in the harbour.