How do we integrate new students into a rolling programme?

This was the question we discussed on Wednesday. The group was a lively one, with teachers joining from many parts of the world. We also welcomed some new #eltchatters. 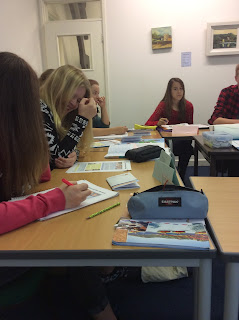 One would think that new blood in a class would be appreciated, but often the students from  previous weeks find it difficult to be presented with new students, especially if they are long-termers. It must feel like they've just got used to one group - and then they have to start all over again!

As this happens often in my context, I wanted to find out if any of the #eltchatters had solutions or ideas to share. We quickly determined that it was predominantly a problem for those of us working in  language schools or summer schools. @GlenysHanson had experience with students joining her classes 1/2 days late. Some of us had students who study in ever-changing mixes, or who change levels at the start of a new week. Others worried about short-term new students being added to exam classes.
For our colleagues who worked in the mainstream teaching establishments, this didn't appear to be a problem.
The rationale for this type of programme seemed to be a question of money for both agents and schools.

So what can a teacher do, on day one, to avoid the 'rolling eyes, not again,' scenario?

@fionaljp   thought that heading off the problem by making students aware at enrolment might work.
@Marisa thought it could be sold as a wonderful networking experience.
@GlenysHanson always warns her students in order to prepare them to be welcoming to late arrivals. @BrunwinLaura suggested that if pair work and collaboration is standard in our classes the 'newcomer effect' should be minimal.
@fionaljp agreed that it would help establish an environment conducive to learning.

The problem is that they are told to negotiate with their teacher, at enrolment, and this can lead to difficulties when they ask for the same things that the class did the previous week! As @Marisa_C mentioned, a large bank of material is necessary, organised by theme, level etc.
@sandymillin had a resource library which offered freedom of choice but which she found overwhelming.
@Marisa mentioned that Longman published a flexi-course for such occasions but it died an untimely death!

@fionaljp suggested that it would make a useful review and reflection lesson.
@Marisa_C thought that the existing students could mentor the new ones, which could be a standard idea for the first day of each week.  Or that the teacher could run 'Grammar Clinics'. By this, she meant allowing the class to choose self access material while the teacher did mini tutorials for individual students.
@seburnt liked the idea of a weekly student-led 'Teach-a-new-student hour'.

@angelos_bollas suggested that students complete a journal with profiles of as many students as possible, and continue to update it each new week.
@sandymillin found that writing in a journal was a great way to get to know new students, particularly shy ones.

@Marisa_C agreed that newcomers can be resented after a group has 'gelled', particularly if it is a class of teens,- so maybe some group bonding activities would work.
@fionaljp agreed that some disruption is inevitable.
@TheodoreLalos suggested that students could be unpredictable because of their previous learning environment or their immediate social environment.

@sandymillin always writes the names of class members, including her own, on the board. She said that she was always amazed by the number of students who had no idea of the teacher's name, even after several weeks. It is true that knowing names helps the bonding process.

@seburnt thought that learners could be modularly added to an existing group project.
@marisa liked the idea and thought that each student could teach the others something they knew how to do really well.

Everyone agreed that Getting To Know You activities were boring if  trivialised and suggested not labelling them as such, but thought that mingling activities were more accepted. @TheoNavarroTEFL likes to start with a discussion about their motivation for learning and then helps everyone buddy-up for homework etc.

Another problem is that this type of class needs experienced handling, but often it is the less experienced teacher who may have to deal with it, due to the fact that, until the placement test has been completed, no-one knows where the new students will end up. And in summer schools there will be a high percentage of staff who are newly qualified teachers.

So, are there any benefits?

@TheoNavarroTEFL jumped in quickly with the fact that rolling classes can mean multinational, multi-ethnic and multi-generational groups which can be lots of fun.
@sandymillin agreed that there will be  potential for increased understanding and international friendships. And also, it can be easier to adapt to the needs of students if you are not tied in to using a particular coursebook.

Some great links to materials from Sandy's blog posts of her work with rolling classes: