It's been a busy week at work, and the weather has been OK for the most part. The only time I've had for me has been in the garden this week. 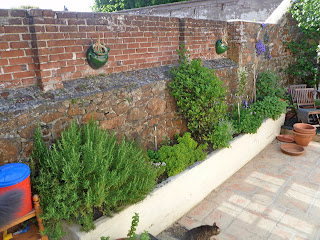 Did a bit more power-washing and weeding in the garden, and then went down to the fish van for something for dinner. Took this picture of my raised herb bed, which is looking green and lush. You can see Maisie on the tiles, and Ebony's tail in the bottom corner. Every time I work outside I have my two 'assistants' with me to hinder me:-) 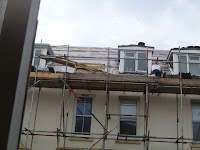 Have some lovely new 1-2-1 students today. The first one will really suit the Dogme style of working and the second is preparing for his IELTS exam. The afternoon business class wants to do lots of role-plays. I was pleased this morning to see that the roofers have finally turned up to work on the roof opposite. I was beginning to think that they were just storing the scaffolding there! 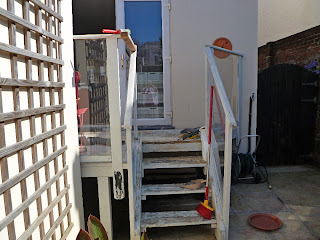 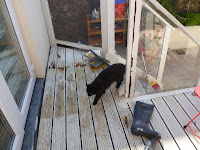 On arriving home from work, I was delighted to see our friend B in the garden. He is a carpenter and I presumed that my husband had called him about the mess I had made with the deck. As I caught him before he had done more than look at it, I was able to persuade him to square it off and make the shape more usable. Our kitchen is higher than the garden for some reason, so the deck is necessary, but it would be nice for it to be wide enough to have breakfast out there when we are more than two.

Today two of my colleagues were celebrating their birthdays. Another of my colleagues is married to a French Chef Patissier, so the two lads asked her to order two French tarts to share with the staff:-). As you can imagine, much hilarity ensued. Plenty of double entendres!! The tarts were produced for coffee- time and were delicious- as is everything produced by Guy.

Thursday 31st May
Today the garden smells fantastic because the honeysuckle is in full bloom. I found a bit of it was trapped behind one of the trees, in a dappled patch of sunlight, and couldn't resist the picture. 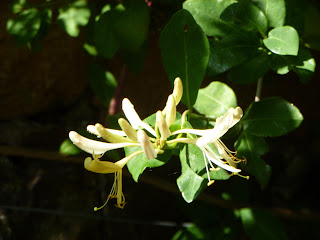 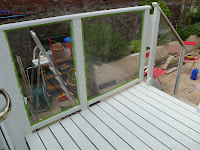 I had to rush home today so that my husband could take the car on the ferry to the UK. My daughter needed her belongings brought back to the island, although she is planning to stay in London for a little longer. B had finished the new design of my deck and made a lovely job of it, so I decided to paint it white and make it a continuation of the kitchen area. Unfortunately, my helpers managed to escape from the house through an open window upstairs, and came to assist. The result is that Maisie now has white paws, and Ebony has the hump because I shouted at her :-(. In the end they got the message and went to sleep under the trees.

Did my usual chores today and popped to the gym for a short workout, before meeting my friend for our usual coffee. I put another coat of paint on the new  deck and then sat in the sunshine for a well- deserved rest. It was great to see that the peony in the garden has flowered and is a very different colour from the others.
Posted by Unknown at 14:28