Not a very exciting week this week. It started well, weather-wise, and deteriorated as the week progressed. I spent most of the week nursing a cold, and interviewing people for the next training course. Wednesday was a let-down, as ELTchat is on holiday:-(, although everyone deserves a break! 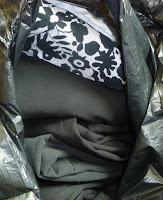 M. was sailing, and Cairis spent the morning sorting out her clothes for the Salvation Army collection.There are collection bins all over the island, and we have one in the supermarket where we park our car. It means that you can clear out the clothes that you don't need any more, and someone else can make use of them. We popped them over to the shop, although it was closed, as we have a key card to get in:-).

Back to work today and it feels like I didn't have a break. My students are lovely and I have three very interesting classes. Started interviewing after the staff meeting at lunchtime, which pretty much set the tone for the week. By the time I got home, I had a look in the cupboard to see what I could make for dinner, and decided that I needed to go shopping:-(.
When I returned my cold was beginning to manifest itself so I made myself a fruit salad- and went off to bed early.
Tuesday 31st 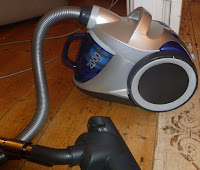 Before leaving for work, I asked Cairis to do a bit of hoovering for me. I wasn't too impressed when I got home to find that she hadn't done it!. In the end she was vindicated though, as the hoover had comprehensively died. It was an old Dyson, which I had had for years- and the call out charge to repair it was more than the cost of a brand new one. I went over to the supermarket and found one which met my needs- something that could handle cat hair was top of the list :-) I found a super little Electrolux which is actually more powerful than the old one, so happy all round. 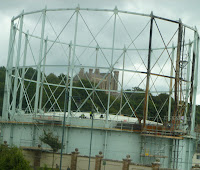 Today is the day that many in my neighbourhood have been waiting for. The big gasometer, which was alight not long ago, is being decommissioned today. I like the fact that you can see Victoria College through the frame- but in a few weeks  the structure will all be gone.The men are emptying the remaining gas today, so fingers crossed there are no problems.
Thursday 2nd August 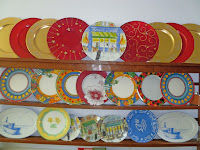 A day for housework! I decided to take the plates on my dresser down to wash and dust. The weather forecast was for isolated showers- what they didn't tell us was that the showers would be absolute downpours. My poor little cat was out in one of them , and she really hates being wet.
When she comes in wet she drags her towel to me and cries until I dry her. Everyone is amazed that Ebony does this, but her sister Maisie doesn't mind being wet at all.
Friday 3rd August

Today I was given a special present from one of my old Chinese students. I helped him pass his IELTS exam a couple of years ago, and he went off to University in the UK, to do a Masters degree. He was showing off the island to his parents, who had come over for the Olympics, and asked them to bring a small statue of a Chinese teacher for me. I was delighted to see him, and the gift was totally unexpected.
Saturday 4th
Thank goodness it's the weekend. We are still having those bizarre showers, although not too often, and the rest of the time is warm and sunny. Spent a lot of today glued to the TV watching the Olympic games as the British athletes and sports-people did really well 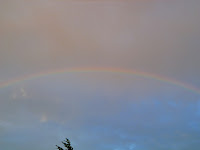 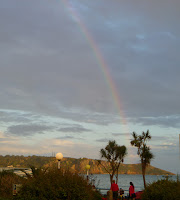 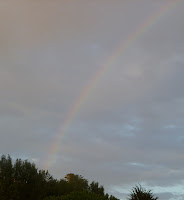 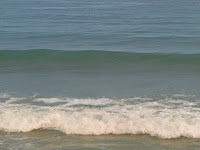 In the evening we decided to go out West for a pizza, and parked just as a rainbow developed over the bay. My husband said that I wouldn't be able to photograph it, as he didn't think it would come out. So I tried... 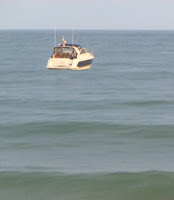 While we were eating, the tide was rising fas. The surf is fantastic on the West coast and I was surprised to see a little boat bobbing about on the high tide. The movement made me feel queasy just watching it! 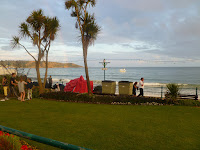 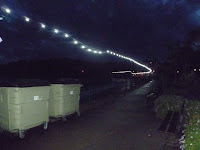 This is the promenade of St Brelade's Bay. You can see the rainbow in the background. I took the first picture when we went in to the restaurant- and the second picture when we left. There are lightbulbs strung all the way round the coast.
Posted by Unknown at 12:50