They say it never rains on the Battle of Flowers, and that was in evidence this week. The weather got warmer and warmer- starting in the mid 20s and finishing on Saturday with 30 degrees. This was the week that many people in Jersey had been working towards for months, and they probably hadn't slept much for a few days too. 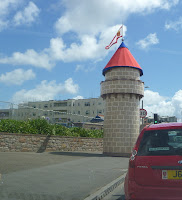 Today the battle committee started to put up the familiar towers along the Avenue where the parade will take place. They added flags, which fluttered gaily in the breeze- all of the Parishes were represented, and those were interspersed with the flags for the battle itself, and the leftover bunting from the Queen's Jubilee celebrations earlier in the year. The towers were beginning to look a bit elderly, so this year we have some brand-new ones.
Monday 6th August 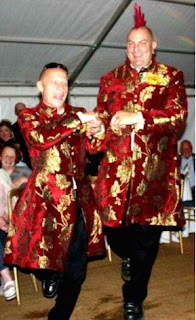 Today was my short day at work.After the usual meeting, I did a couple of interviews for my course in October, and then went home for a nap! Yes, I know, that's the sort of thing that old people do- but I had a good reason. The band had been invited to play for a party in the evening- and it didn't start until 10pm, so it was going to be a late one! The director of the Arts centre, a lovely, flamboyant man, was having a civil partnership celebration with his long term partner on the stage in the Arts centre and wanted us to play for dancing later in the proceedings. The evening party was held at the Donkey Sanctuary, as the lady who ran it was also having her 60th birthday, making it a lovely joint celebration. Our first civil partnership:-) After we had finished it was really dark and some fire dancers appeared. Everyone was mesmerised by their art. Unfortunately the photo didn't come out as well as I had hoped, but you can just see the face of the dancer on the right.
Tuesday 7th 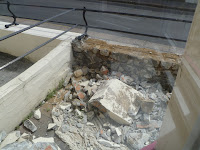 This morning the builders turned up to start work on the outside of our house.Of course, the first stage is destruction, and I was shocked to see that the garden wall had actually been held together with little more than Victorian sand! Thank goodness we decided to bite the bullet and get the job done professionally.
Wednesday 8th 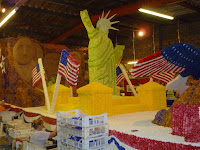 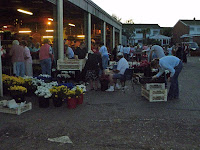 This is the day, evening before Battle and as a family we have always gone for a tour round the floats to watch the last minute sticking-on of the flowers, and to enjoy the atmosphere.We started with our own Parish of St Saviour, which had an American theme, and then moved on to St Martin, Grouville, St Clement and finally we drove down to Meadowbank, where several floats were all being built in the large packing-shed which is made available to them at this time of year. The work that goes into each float is amazing, and requires many dedicated volunteers. There still seemed to be a lot of work to finish before the parade, and I'm sure that some of the float builders would not be going to bed. 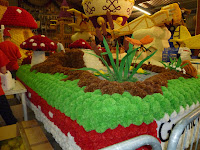 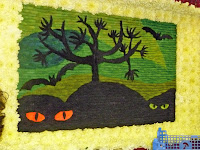 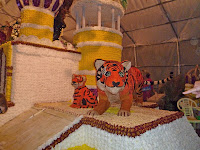 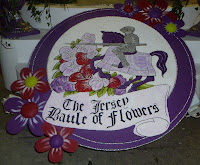 Let Battle commence!
The first battle starts with the traffic.Jersey roads are very narrow, and some of the floats were extremely long. The first ones arrived at their destination around 6am in order not to disrupt traffic too much. I had to tackle the ones coming from the West on my way to work. Everyone is very tolerant in the morning, so it isn't really a big problem. At the end of the day, when I want to go home, I don't feel quite so charitable:-(.
I had to work all day, so missed the parade, but it was a rip-roaring success, and people who did go had a lovely time.Jersey Battle of Flowers 2012. The floats stayed in town in preparation for the next day's evening parade,the illuminated parade.
Back at home I was pleased to see that the builder had started to rebuild the wall, and reinforce it. 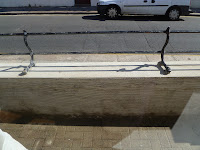 Today was the hottest day of the year so far. This is about the only time that working in a cool granite building is a pleasure. ( In the winter you need about three pairs of socks). The house wall is coming on now, and the scaffolding is due next week, so that the main walls can be painted. The builder asked me to go to the paint shop and find some colour charts so that they can organise themselves.I'm thinking about going yellow this time, as the red faded really fast. Perhaps a more delicate colour will last longer.I just have to convince the others now :-)
Saturday 11th

I added my piece to the disseminating of information for ELTchat(see previous post). Saturday is usually a busy one, but it was so hot that M and Cairis went sailing and swimming in the sea in an effort to cool off, and I did some housework and went shopping. In the evening we enjoyed watching some of the Olympics on TV, and were delighted for Mo Farrah when he won his second gold medal of these games. This is the final view of the old door. It is going to be replaced next week with one which is more in-keeping with the style of the house. We had to decide where to put the letter box, and we have decided to have a box on the wall as we often get larger letters than the little letterbox can cope with. This often means things such as photos finishing up bent!