It was one of those funny weeks again- we had fantastic weather at the beginning and end of the week, but it was a bit so-so in the middle. Not much happening outside- I've got lots of preparation to do for the upcoming course and I'm still interviewing for the October one:-)
Sunday 12th August 2012 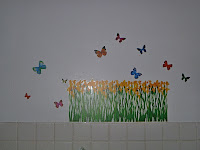 A busy day today. I spent the morning clearing out the recycling and decorating the utility room wall with some stickers I found. They cost the grand total of £0.99p, but really brighten the space up. The room is long and thin- it was the original kitchen of the Victorian house, but we use it for messy things such as cats, recycling and washing! In the afternoon I managed to knock my iron over and break it:-( 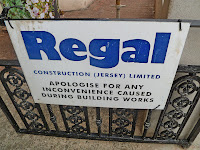 We were supposed to be doing a tech session as part of our CPD, but we were given some bad news about the health of one of my colleagues, so no-one was in the mood, and we all went home. I bought a new iron on the way back from parking the car on the top floor of the supermarket. It cost an arm and a leg! On returning home, I saw that the builders had decided to advertise their presence by fixing their sign to our gate. 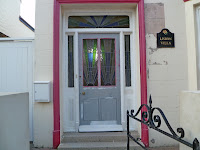 On the way home  I smiled to see these beautiful sunflowers. They were so tall that you can see they almost reach the windows on the second floor of the house. They are so cheerful that you can't help but smile. I have never tried to grow sunflowers, although they do look easy to grow. 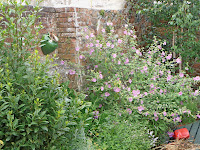 Today I did some work in the garden. It has been a little neglected of late, and we needed to empty the side passage for the scaffolding to go up. It has been a very dry year and we are not supposed to use our hose- pipes at the moment. I decided to plant lots of sun-loving plants so that it wouldn't matter if it was hot. Good call! All the plants are growing like weeds. 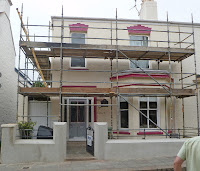 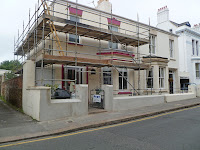 The end of the week, at last! It has been a long week, with everyone at work subdued, and not much else going on. Today the scaffolding arrived. It was up by the time I got home. We look like a matching pair with Tom's house on the other side of the road. His roof is finished, so it won't be long now. 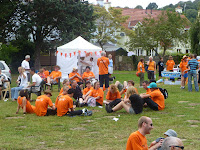 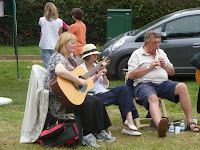 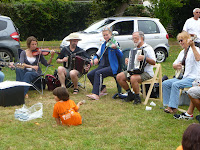 6 years ago a young 19-year-old died from a rare type of bone cancer and his father has raised money for the Teenage Cancer Trust ever since. Today would have been the young man's birthday and his father organised a series of sponsored walks for the weekend. Earlier in the year he had approached us to see whether we would play for them at the end of the walks on both days, and we said we would if we had enough musicians available. We sent an email out to the gang who jam with us on a Friday in the pub, and were able to cobble together a band of 10 of us who were free to play. As the father is Dutch, everyone was given an orange t-shirt to wear. We didn't get ours until the end of our Saturday stint -so we have them for the Sunday instead:-) The sun was shining and we were there to create the ambience at the finishing post, along with some food stalls and cancer charity stalls. It was fun, and I hope they raised lots of money.