This was the last week of the first course, and I spent it marking, and preparing for the next one. Bed was a distant luxury and M going to Scotland was a wise decision on his part. The weather this week was fine, although it sounds like it was very wild and woolly in parts of the mainland. It still isn't really cold, and I'm not yet wearing any heavy clothes, or even a coat, although it is starting to get nippy at night.

Sunday 23rd September 2012
Cairis was busy finishing off her paperwork, so I got to grips with some housework, and spent the rest of the time fielding phone calls and emails from my trainees. I picked up some flowers from the little stall I always go to on a Sunday  and we bought some bread from the Garden centre, and had it with some home-made soup. M's friend was working on his boat at low tide. Here is Jigsaw sitting in the mud. No wonder Mike is in bare feet:-) 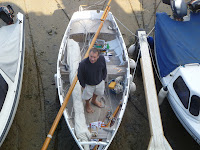 Today was the day that the trainees handed in their learner profiles. The profilees were sad that their time in the spotlight had come to an end. Cairis and Josh had  been working with Swiss girls, who gave them each a Lindt chocolate as a thank you for their work. The trainees  made copies of  their profiles for their students, which will help them in the future. 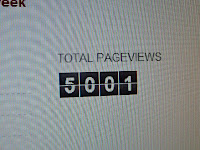 I had a free 5 minutes today! Not a lot! I decided to have a quick look to see if there were any comments on here. I was excited to see that I had exactly 5000 views on the counter. By the time I had organised my camera to photo the detail for posterity, it had changed to 5001 :-) 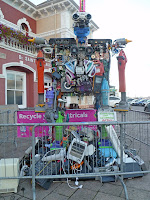 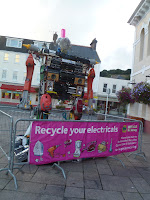 Wednesday 26th
The moderator arrived today, so I picked him up from the airport and dropped him down to his hotel in the village. Imagine my surprise to see a robot made of recyclede elecrical appliances outside the Parish Hall. It was made by a local artist to highlight the fact that we should be doing more recycling, and was outside to encourage locals to bring their rubbish along. I belive that there is going to be the same thing in the other parishes. 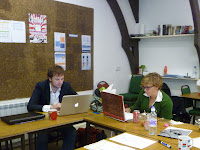 My trainees were delighted to have handed everything in for marking, and were sitting at rest in their room. I snapped a couple of them- checking their social media, I think, for the first time in days :-) while the other two were chilling!. I don't know where everyone else was at that point. 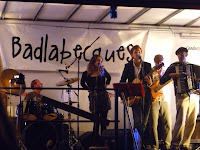 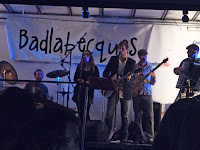 Poor Kit. Not only did he have to be moderated, he was also releasing an album in the evening. Normally we all go out for dinner after the party we lay on for our TP students. Kit suggested that we all go down to watch the album launch, and then eat together in town. My own band also decided to go down to listen, and, as a result of the posters Kit had placed around the school, many of the students turned up too. I felt as if  the different parts of my life were colliding! The band is a Jerriais band called Les Badlabecques, which means The Chatterboxes. They were veryy good, and many people turned out to listen to them. They performed outside the States Chambers, where our government meets, and chose the date to celebrate the Corn Riots of the 18th Century, which led to Jersey getting some degree of democracy. 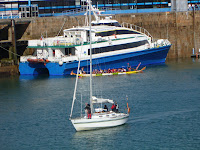 M came home yesterday, but he wasn't planning on hanging around :-) His friend had asked him if he would helm his big boat for a race to Granville, in Normandy. When I dropped him down to the harbour it was very busy. The  French ferry was in, boats were preparing for the race, and there was a dragon boat race about to start. This takes place every year, and companies put forward a team to take part. All the money is raised for Jersey Hospice. Last year they made £40,000. I finished the day playing music at a ceilidh wedding for one of the Jersey Lilies. She got married in the bay, with a full moon overhead. It was magical!