An interesting week, which really started on Sunday.
As the Christmas tree had been taken out into the front for collection, the house looked rather bare. It was time to fill the house with flowers. I don't normally have any during the festive period- I can't keep Poinsettias alive for more than 5 minutes, but the moment the tree is down- I'm ready.We drove to the little farmer who has an honesty box next to his flowers and bought an armful of daffodils. They are so bright and cheery.

We finished the day with a Mexican meal which was shared with our friend Miles.He comes for dinner every Sunday- and when he sits down he is targetted by Maisie, who loves to cover his trousers in fur:-) As you can see here, the room looks a bit stark by the window.

The next day was worse- I felt like I was living in a goldfish bowl. The hotel on the corner is renowned for its French tourists. Unfortunately, they stop and take pictures through my window, muttering things like 'how English' or 'aren't those cats cute', which was easier to avoid with a massive eight-foot tree in the way. I decided to move the furniture around to give me a modicum of privacy. I then spent some time enrolling in the EVO sessions which interested me.They look like there will be lots of other things and people to get to know- which is always fun.

Tuesday dawned wet- and stayed like that for most of the day. Ebony found a tiny puddle of sunlight, which lasted for all of ten minutes.
Cats are amazing creatures- they really like their home comforts. Ebony was upstairs, in my office, keeping me company as usual. 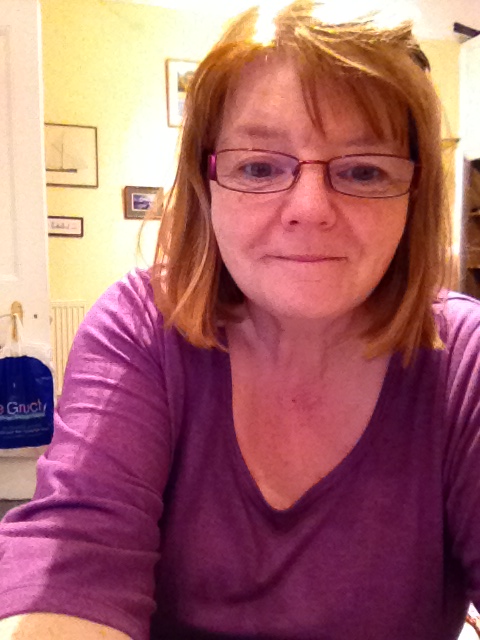 This is a 'selfie' taken for fun while I was sitting at the computer. I don't usually take pictures of myself! I was making a glogster as my introduction to one of the courses and trying to sort out some music files.
I spent a large part of Wednesday answering emails, checking facebook, edmodo, google+ and generally faffing. No-one else was at home, and I had nowhere I needed to be so, why not? The daft thing was- for a change the sun was shining- and I stayed in!

Thursday wasn't very different. I had a few things to finish off for work, and then a couple of my colleagues came for coffee. I convinced them to sign up for some EVO sessions, so was feeling pleased that I was able to help them with some CPD. In the evening I lit the candles on the mantle-piece, put some coal on the fire and curled up with a good book on my kindle.

On Friday I had to go to the college for my annual appraisal, which went well. The school is changing for the better all the time, and this year the staffroom is going to be developed, so the teachers' views are being sought. When I got home, the Organic Shop had delivered my weekly box of vegetables. I never know what will be in there, so it is an adventure. This week there were lots of purple things: carrots, beetroot,onions- as well as the normal squash, potatoes, cabbage,swede. Some interesting soups and stews coming up methinks. I spent an hour in the early evening catching up with some of the course participants on twitter.

Saturday started well when my neighbour brought me a gift of 3 ceramic cats, which nestle against each other , for my collection. Aren't they cute? I then needed to buy cat litter and was horrified at the price of this one. It might be the 'World's Best' but I'm sure that it is also the most expensive. The Hospice Collection team came to take away the tree. For a small donation, they will collect and dispose of the tree for you. It gets turned into soil improver- and then it is sold back to you Very entrepreneurial !
Hope you enjoyed my trawl through my week. I didn't do anything major- but then I never do at this time of year. I'm looking forward to the sessions getting under way next week- and then I'll be back to work :-)