This week my focus has been very much on the weather. I think we have had nearly everything except snow- and that could yet be on the way. In principle, the sea keeps the island warm, so it is not usual to have snow in winter, but it does happen occasionally. 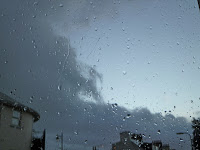 Sunday dawned wet and blustery. I didn't have to go anywhere, so I stayed in and made some of my Granny's recipe Lentil soup. We don't often stop for lunch at the weekend, so a pot of soup on the go allows people to eat as and when they want.

Monday 23rd. January
Today the weather was dry and crisp so I wandered down to the bank in town. We are in the process of changing over our money, so there are two design on the go at the moment. The new design has raised a few eyebrows as the Queen is wearing her Crown in the photo. In the old one she was represented in her role as the Duke of Normandy. Have a look for yourself..

My mother-in-law had a beautiful necklace made from Edinburgh crystal. She decided to have it broken up and remade into three single-string necklaces for her daughter and daughters-in-law. I always look it out at this time of the year as I like to wear it when the ceilidh band does Burns' nights.

I had planned to work on the garden today, but the weather decided otherwise. We had a hailstorm!. I decided to leave the garden furniture under cover for a bit longer. The cats like to hide under the tarpaulin and attack each other. They will be sorry when the weather is warm enough to remove it, but I can't wait! 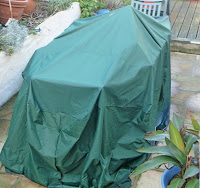 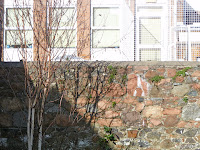 Thursday 26th January
What a lovely sunny afternoon. I did some work in the garden and my neighbour was out working on his allotment on a nearby farm. I was surprised, and delighted to be given a box of organic vegetables from him. 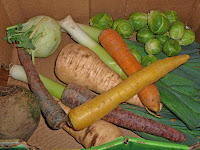 They taste as good as they look. Can you see the old varieties of carrots he grows.  I always surprise my friends when they come to dinner and the carrots are rainbow- coloured. They don't taste any different from the organic orange ones that we are familiar with.
Friday 27th January

Friday wasn't a very busy day. I wanted to prepare for going back to work on Monday, so I had a quiet morning doing paperwork, and working on my EVO course. In the evening I saw a lovely red sky. I hope that it means good weather for Saturday, but the cows in the nearby field weren't so sure!

Later, as usual, my musician friends and I met up in a local establishment for a beer and some music. This time it was a tiny pub on the North East of the island.
Saturday 28th January 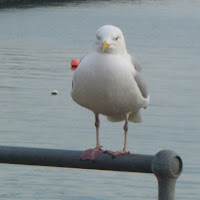 St Catherine's breakwater on the South Eastern tip of the island. From here we can look across to France, which you can just see on the horizon. 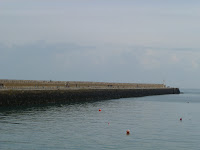 The big Scottish Society of Jersey Burns' night is tonight, but first I went out to meet my friend who lives in the countryside.The drive out is interesting as I have to drive along the South coast to the East, and then turn North. The island is very different at each point. 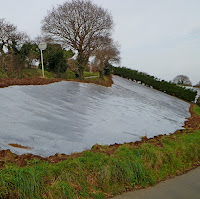 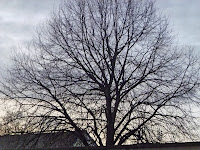 This is a Cotil under plastic. At this time of the year the early potatoes, Jersey Royals, are planted, but the risk of frost is not over. As the cotils slope downwards to catch the sunlight, the risk of rain washing the soil away is another worry. If you were flying over the island at the moment you would think it was snow-covered. 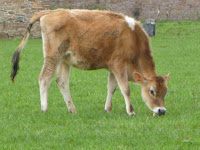 Here is a pretty Jersey cow, with long eyelashes.The milk is very rich and high in fat content. They really are beautiful creatures.