This week seems to feature transport more than anything else. Part of the reason is that the cold weather brings out all the cars on the island, as no-one wants to cycle anywhere, including me, and partly because my husband is underfoot when he can't play on his boat.

This was one of the roads I drove down on Sunday, and the sign attracted my notice. You can see the Jerriais language at work again in the accented Es in the middle of the road name. Also interesting is the La at the beginning. This is starting to creep in to signs which never had one in the past.  If you look closely you can see the Parish of St John crest to the left of the name. The beautiful pink granite is typical of island buildings, as it is the local stone. 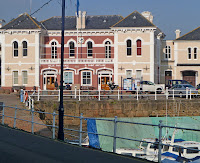 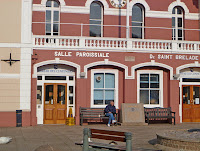 Monday 6th February
This is St Aubin where I work.The Salle Paroisalle, or Parish Hall, used to be the railway station and still retains the character. It sits next to the harbour and in the close up, you will see that there are two offices: one is the Bureau du Connetable, and the other the Bureau des Centeniers. These are the local honorary police titles.You can just see the back of one of the harbour geese to the left of the picture.
Tuesday 7th February

I found myself driving to work behind a couple of H-registered cars. This is quite unusual in February, although they can be a menace later in the year. The H stands for Hire car, although many locals say it stands for Horror!. They do have a habit of stopping suddenly to consult a map! I took a photo of a normal J-reg so that you can see what the locals drive around in. The tourists really stand out, and it makes us more careful on the roads. 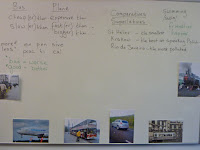 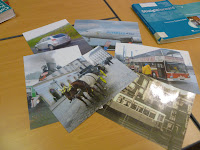 This is a picture of my whiteboard at one point during the day. I used photos from an ELTpics on Flickr set. These are photos, taken by EFL teachers, for other teachers to use. My lesson was looking at comparatives and superlatives, and the  pictures were ideal for a discussion about transport to and from the island. 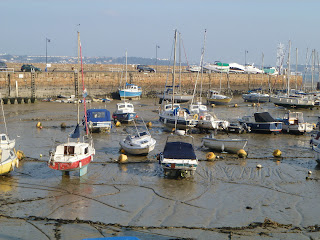 On my way home I saw that the tide was out. Every day is different. St Aubin is a harbour where the big boats which went cod-fishing in Canada used to tie up and could be repaired, as it is a dry area. St Helier is in the background.

After work I went for a drive on the West Coast, which brought me to the lighthouse of La Corbiere. You can walk out to the lighthouse, but have to leave the causeway when the siren announces that the tide is incoming. It is a lovely place to see across the bay to the other side of the Five-mile road.  It is again taken at low tide, allowing you to see the rocks. 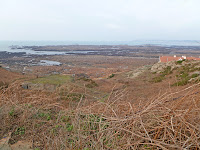 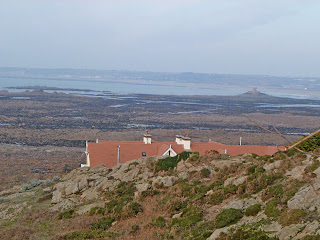 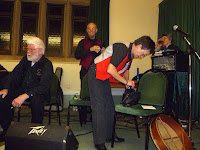 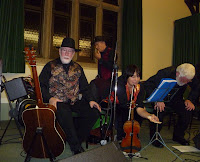 Today the ceilidh band that I play in offered their services to a local choir who wanted to have a fundraiser for charity. It doesn't take us long to set up so we get there a little before the public, and lay our all the equipment. My final pictures for this week show the band setting up for what was to be a really good evening.