Week 8 already- where has the time gone? I thought it would be difficult to keep going, but the world around me changes on a daily basis. The tides and weather make a great difference to the views. 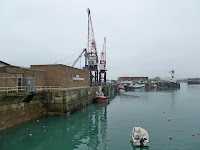 This is the working harbour in St Helier with the tugs and cranes. At the corner of the harbour is my favourite fish stall. The fish is delivered by the boats as they come in and sold directly to the public. Today we decided to have local lobster and some scallops.

I was teaching upstairs in the college and took some photos of the view from my window. The sun was shining and it is always relaxing to work in the classes which look out over the bank of greenery. My
favourite view is from class 10- you get a little secret glimpse of the sea at the foot of the hill. 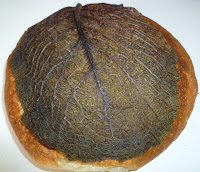 Tuesday 21st February
Thinking about food today. I remembered my daughter telling me that she tried to buy a cabbage loaf in London, not realising it was a Jersey speciality, and the shopkeeper didn't know what she was talking about! It made us smile, so I bought a loaf to remind her. It is baked wrapped in cabbage leaves, which gives the bread a very distinctive flavour. Yummy! 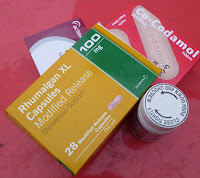 Today was all about pain! I managed to hurt my knee yesterday and couldn't bend my leg without screaming. I thought it would get better by itself, so left it for a day, and hit the painkillers,but I had to bite the bullet and visit the doctor to get some anti-inflammatories and sledgehammer strong painkillers in the end. 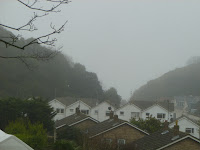 Pain under control today so I was looking forward to a nice normal day. It was not such a good one for anyone travelling to or from the island, though. We had thick fog, which prevented planes from takingoff and landing. You get used to weather conditions when you live on an island, but it is still very disruptive. I took a photos from class 10 again, to show the difference. It looks like the end of the world- you can't even tell that there is sea down there!
Friday 24th February 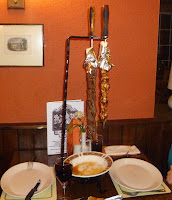 We were planning to go to the Arts centre to a concert, but the fog prevented the musicians from arriving in time. After a call apologising for the cancellation, we decided to go to the local pub for an espetada.This is a type of kebab from Madeira, which has a very special stand.Here you can see one beef, and one chicken espetada. They are really delicious. 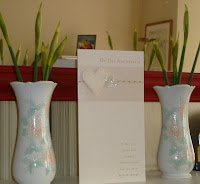 Today is our 23rd Wedding Anniversary. I took out the vases that my mother gave us as part of our wedding present.I always try to use them at this time of the year and I remember her. We have many wedding presents we still use frequently, although the giver has now gone. Looking forward to a meal with friends in the evening. Rob will be celebrating his 11th birthday in a couple of days- He was born on 29th February and only manages a birthday every 4 years. Every four years we have a joint celebration, and a nice meal together. My knee almost feels OK- just the odd twinge- so fingers crossed for next week.