After the fog of last week, we had a sunny start to this one. I was working in the morning and preparing for next week's Cert.TESOL in the afternoons. That gave me time to shake off a cold and do a bit of catching up in the garden too. 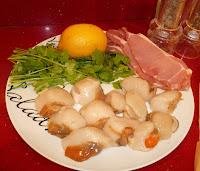 Friends were coming to dinner to help us celebrate our anniversary, so I went down to the fishmonger to see what looked good. I decided on some scallops, which I cooked with bacon and herbs. Both my husband and friends love seafood, so it was easy to choose lobster for the starter. You can see that my kitchen worktop is a bright shiny red, a colour which can be found in most rooms in my house:-)

Back to work. I love my job, so it isn't a hardship  to get out of bed on a Monday morning, although I like it better when the weather is sunny. This is the school where I am based. It was built around the turn of the last century and belonged to the Church, who put a covenant on it so that it can only be used for educational purposes. As usual, it is built  from pink Jersey granite. That makes it difficult to heat in the winter, but it is lovely and cool in summer. It looks a little bleak until the trees turn green. 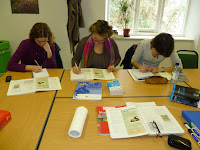 One of my twitter colleagues put out a request for pictures taken inside the classroom, so I decided to oblige him. I took this photo while some of my students were completing an exercise:  that way I didn't get their faces.They gave me permission to post it, though.The students round the corner were also photographed, but I didn't check with them first, so I haven't put it up.

Wednesday 29th February
Felling a bit under the weather today. Everyone seems to have a lurgy as the temperature is starting to warm up. It's just a bit of a cold, and should be easy to shake off in time for the weekend. I made myself a hot toddy with  hot water, lemon, honey and whisky to drink while taking part in #ELTchat on twitter. Unfortunately, I had to bow out half way through the session and take myself off to bed. It did the trick and I felt much better the next day. 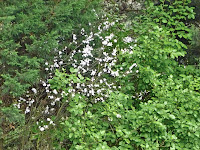 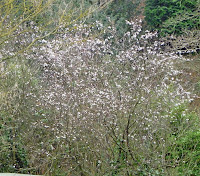 This year is galloping along. I can't believe it is already March. Spring is definitely round the corner now. The trees on the railway walk are covered in blossoms.I'm looking forward to seeing the colours in the hedgerows as the daffodils come up all over the island.


Friday 2nd March
Out in the garden

You can see that the garden temperature is not looking too shabby. I decided to get out and do a little work in the garden. Next week my course starts and I really find that there aren't enough hours in the day to do everything I want to do. 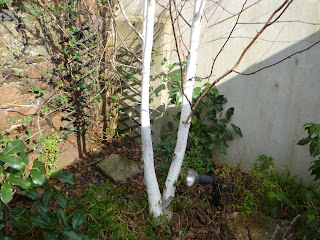 This is one of the silver birch trees in the garden. I love the fact that they shed their bark each winter and emerge so beautifully white against all the greenery.

The picture below shows that I need to do some weeding! The old cat was buried here, with the statue marking her final resting place. You can hardly see it for all the vegetation. 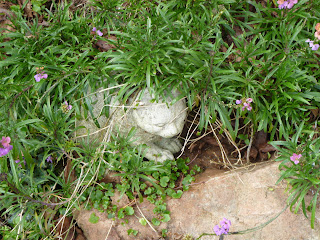 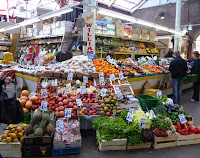 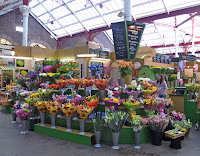 Last pictures for the week!          I needed to do a bit of shopping in St Helier, so I organised a meeting with a girlfriend for coffee. We met in the Central Market, one of two in St Helier, the other being the Fish Market.
It is a Victorian covered market, which sells fruit, flowers and vegetables. It is always a vibrant place to shop, although, with parking difficult in the centre, you have to think about carrying all your shopping!

This is the fountain in the centre of the market. It has goldfish in it, and people often throw in coins , which are cleared out each day and collected for charity. 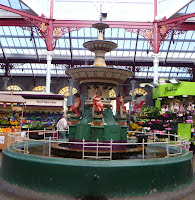