It's been an interesting week weather-wise, full of sunshine and April showers. This has meant that the island is really starting to come to life. There are flowers everywhere now. I managed to get out a bit, although I got soaked a few times. I'll be glad when April comes to an end:-) 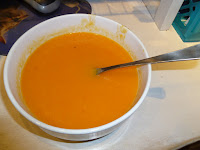 Today was cold and miserable- a day for staying home and keeping dry. I had a glut of carrots, as my neighbour brought me some from his allotment, and I had already had my organic veg box delivered- which included carrots! I decided to try some carrot and orange soup, with herbs from the garden. It was very nice, although sweeter than I'd expected it would be. 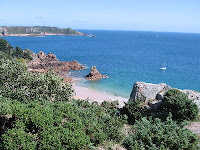 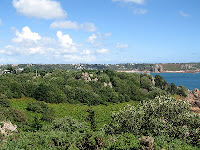 For those who don't know- I live on a little island in the English Channel, close to France. I have twice been asked this week for information about the USA, to which I had to explain that they were confusing Old Jersey, with New Jersey, the clue being in the name:-). Here is a small map giving you a picture of the place. Today I finished at lunchtime and decided to go for a walk on the North coast.

My neighbours are having their roof repaired and when I look out of my window I can see the scaffolding. This is a buzz word in the ELT profession too. These Victorian semi-detached houses opposite me give you an idea of what mine looks like. Although mine, and my neighbour's have beautiful glass in the front doors. 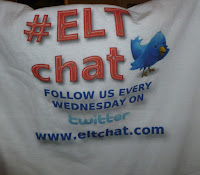 Many thanks to one of the moderators of #ELTchat on twitter for sending me a couple of t-shirts, which arrived today. These were on sale at  the IATEFL conference, which I missed, so I was delighted that he saved me a couple:-). I wonder when I will get the chance to wear it. I might have to wait for the Tesol France conference in Paris later in the year! 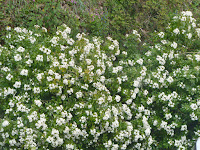 All the rain and sunshine has brought on all the shrubs outside my classroom. While my students were working I took a quick shot of the mock orange under the window. The smell is absolutely fantastic. 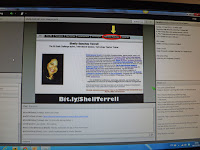 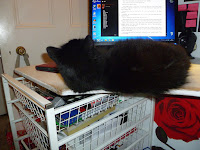 I've been looking forward to this day as it sees the start of the Virtual Round Table weekend conference, which I plan to see as much as possible of. My black cat, Ebony, decided to help-or hinder! She attacked me every time I tried to move the mouse:-( Eventually I managed to coax her away and settled in for a good evening. We went down to the pub for a couple of hours during the evening, and returned in time to continue where I left off. My luck was in - and I enjoyed Janet talking about this project - and how to use the pictures in class, which was excellent. 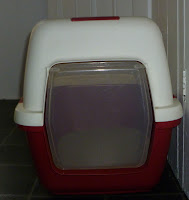 More VRT, almost as soon as I got up. I then caught up with my social media... and tried to put off the moment when I had to change the cat litter:-(. As it had been raining on and off all week, the two little treasures had decided to keep their feet dry! It's not my favourite job, but eventually I did it. Now I feel quite smug- and I'm crossing my fingers that it doesn't rain this week!!!