This week we had more afternoon teachers than we needed, so it was the ideal opportunity to have a little pair-teaching and peer observation.
We started by pairing the experienced teachers with less experienced, or newly qualified ones.
The plan was simple:
Teacher A taught on Tuesday afternoon (we have a visit on Monday afternoon for all students).
Teacher B had some non-teaching time to plan a completely new lesson. The brief was to try something that you had never done before, and at the same time provide new material for the resource bank. It  was a great opportunity to get out of the comfort zone and experiment.
On Wednesday the roles were reversed and Teacher A had time to prepare a lesson.
On Thursday  each teacher had to teach their new lesson, and be observed by the other teacher in their pair.
I was Teacher A, so I started the week by meeting and bonding with my new students. I explained what we were planning to do, which they thought was a fun idea, and negotiated any areas or topics which they wanted to cover. The pre-intermediate/intermediate group of Germans, Iranian, Czech and Italian, were happy to go with the flow and had no set ideas. They wanted to see how the week would unroll. I felt guilty that I was able to meet my students before developing my lesson, and was aware that the opposite was true for Teacher B.
On Wednesday I was surfing YouTube, when I came across a trailer for My Life Without Money. Looking further I found another one about a journalist who had toyed with the same idea. This set me thinking about what I could do with the material.
I decided to prepare a lesson on money, or how to get by without any..!
To try something outside my comfort zone, I volunteered to be videoed while presenting my stuff.

I set up early enough that I had the clips ready and the video in position before the students arrived. They came in with enthusiasm, and actually didn't notice the camera so I didn't mention it, as it was not recording them. (I did tell them at the end, in case they didn't want their voices recorded, but they were happy for me to use the recording).

I started by asking them about collocations. I gave them a worksheet and asked them to work out the missing noun (Money). This didn't take long and I elicited some more verbs from them. We ended up with inherit, invest, borrow and steal to add to the list.

I then showed them a slideshow with pictures of objects pertaining to the topic. They had to work in pairs and write down the vocabulary if they knew it. For the weaker pair, I had prepared a crib sheet with the relevant lexis. This was done as a competition between the groups.
We discussed our attitudes to money. Did we need a lot to get by? Were they worried about not having enough when they retired? etc. 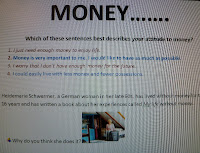 I introduced the German lady's story and asked them to list the advantages or disadvantages of this way of life. The groups shared their findings and I then showed them the trailer. We looked at the second trailer and discussed the similarities and differences between the people involved.
I had a short text about the woman with a few scanning questions, and it contained some of the phrasal verbs that they had been working on in a previous lesson.

The lesson finished with a card game where they could ask questions, around the topic of money, of anyone in the room- including the teacher.
This lesson flew by and I forgot that I was being observed or videoed.

The next lesson was M's and she had put together a lesson based on the television programme @Come Dine With Me'. The students enjoyed the preparation for a dinner party for the rest of the class, and discussed themes and menus based on their own cuisine.The material was well put together and engaged the class. As with my lesson, it would have been easy to use it during a longer lesson. I believe that she planned to finished her lesson on Friday afternoon .

At the weekend,I reviewed the video.I wanted to see whether my initial impression of a good lesson panned out. I divided the video into sections and analysed the communication to see who was doing the majority of talking. I wanted to find out a) when I was speaking b) what the purpose of me speaking was. In fact I only spoke to set up the various tasks, introduce the film trailer and make encouraging noises when the weaker student spoke up. I was pleased by this as it meant that the lesson was 75-25 in favour of the students, and even then it was more or less equally shared amongst them.