Another week where the weather was a bit mixed. Two of my students are getting married, and the have to do their vows in Polish and English at St Thomas's. As Agnieska doesn't speak much English, she was panicking, and I have been coaching them. It's been fun.
Sunday 13th May 2012

This is El Tico, a cafe/restaurant on the West Coast, in St Ouen. The weather was not perfect, but it was nice to stop for a coffee, after a walk along the beach. 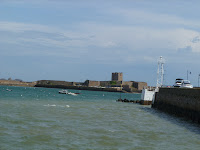 This was Monday morning on my way to work. The tide was high and the wind was strong. You can see the 'white horses' on the surface. The building on the right is St Aubin's Fort. In fact it wasn't a wet day, and the sky was blue, so the students went for a short cruise round the coast- I wouldn't have gone if you had paid me!! 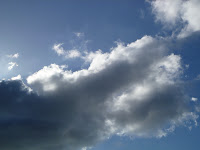 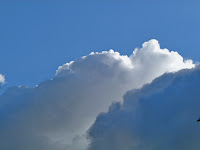 I was reminded of Janet's idea when I took these pictures. I thought they would work for the proverb 'Every cloud has a silver lining :-) It was wonderful to see the silver edge of the cloud as the rain passed over us - and moved away! 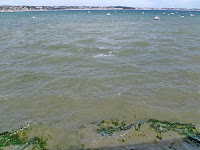 Another High tide on the way to work. This was on a grey day, and shows all the colours possible in the sea. It started off sludge grey,on the Western side, but was a beautiful aqua-marine on the other side of the bay. 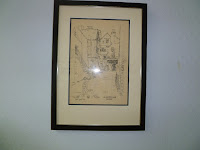 Slawek, one of my students, is a picture restorer and  took away a couple of old, damaged pictures that my husband had had since he was a boy. He brought them back today, fully restored, and we hung them in the hall, just inside the front door, to see whether my husband would notice them when he returned from work- and he did!. He was really delighted to see them again.

Today we had no food in the house so I decided to go to the supermarket. I spent £200.00 pounds- which is a fortune, but we had run out of  everything you can imagine- cleaning materials, toilet paper, cat food... . My least favourite job is unpacking it all and finding a space in the kitchen for

Today started with a visit to the dentist- who has moved to a very swish new surgery down on the waterfront. It took a while to find him, as the roads do not yet have named on them:-) My husband used the time to book his trip to the UK to bring back our daughter's stuff from university. On returning to the house, he had to prepare for a morris dancing display at the Jersey Food Fair. He realised that he had brought back some else's hat from the previous weekend shindig. I then did some work in the garden, until it was time to go to the hairdressers.