Well, here we are- half way through the year already. Where has the time gone?
It's been a quiet week, getting back into teaching after a holiday, and trying to tame the jungle AKA my garden:-) 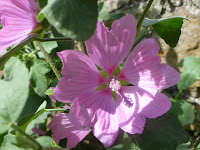 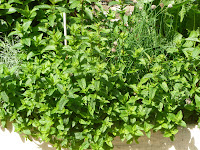 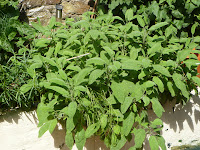 Today was spent doing the laundry and a bit of housework. After the heat of the previous few days in France it was nice to be back in normal summer temperatures. The weather was actually sunny and I could see that my garden had exploded during the week we were away! My neighbour called in for a coffee, and both she, and my daughter, commented on the fact that 'all must be right with the world' as both cats were cosily tucked up in their baskets. They said that neither one of them had stayed downstairs while I was off island. 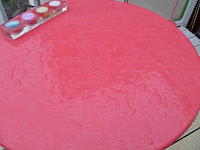 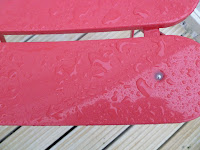 Well, if yesterday was sunny- today was WET! I drove to work in the rain and had to act very upbeat at college so that my students didn't feel too depressed. I explained that we could only have the lush countryside that they all enjoyed if we also had rain sometimes- and anyway it wasn't cold! On returning home I was saved from weeding by the rain. It will wait for another day. I like the pattern of the raindrops on the patio furniture, though.

This cute little piggy is my screen cleaner. The underbelly is chamois leather and the top is really soft plush. I use it to wipe marks off my computer monitor and it does a sterling job:-)
Today I got out into the garden  and picked some of the lavender, which is growing in abundance. One of my friends makes lavender sachets which she sells at local craft fairs. I always give her some of mine at the right time of year. I have a variety of types and colours. 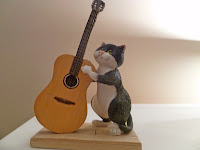 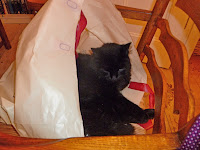 This is my friend's birthday and I haven't seen her since I came back from my hols. We planned to meet up to exchange gifts, and I bought hers from the local garden centre's gift department. Ebony loves bags, and as soon as I had emptied it to wrap the present she climbed in and no-one could shift her. She actually spent the rest of the evening and night curled up in the bag!
I was delighted with my gift of another cat to add to my collection. 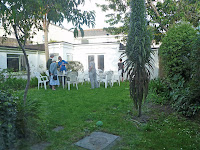 Student numbers at the college have been growing year on year and the difficulty has always been finding sufficient people willing to work as host families. In the summer this can be critical to the number of students we can accommodate, so my boss decided to buy a run-down former guest-house to use as a residence. After some work on the property, and with all the stops being pulled out, he invited the staff round for a look before it opens for business in the near future. It was a warm, sunny evening, so Pimms in the garden was a lovely start to the tour.There is even  a peach tree, complete with lots of peaches. I went alone, as my husband accompanied my daughter to the local careers fair for new graduates:-). I hope she finds a job soon, although she is only just beginning to look. 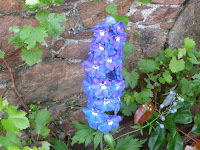 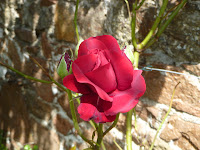 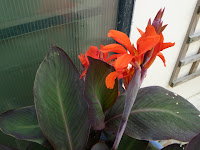 Lots of colour in the garden at the moment. My husband is going away for the weekend, so I hope to get out into the garden and do some much needed weeding. This morning everything was covered in a fine red dust, which the weatherman said was from the Sahara:-)

Got up early to drop my husband down to the  foot passenger ferry terminal for his trip to Sark where Helier Morris men are dancing at the Folk Festival. I'm not going because I don't really enjoy boats and the weather didn't look promising at the start of the week. The tickets for the festival have been sold out for weeks, as well.
In Jersey we have our own festival too. This weekend is the inaugural Folklore Festival in St Helier. The headline acts are Ray Davis, Joan Armatrading and Van Morrison, to name just a few.

Cairis and I decided to wander into town. At this time of the year there is always something going on, and today was no exception. In the centre, there was a fete to raise money for the armed forces, and some of the young cadets were abseiling from the top of Cyril Le Marquand House. 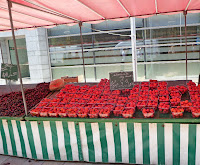 We then found our way down to the Norman Market, which was full of shoppers testing the bread, cheese, saucissons and other goods the traders had brought over to sell. We treated ourselves to some delicious looking soft fruit, and bought Dad a saucisson:-)