What an interesting week!  All kinds of weather and a little bit of adventure to spice things up- although I'm happy that everything turned out better than expected. 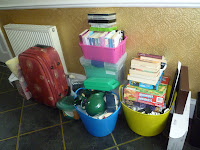 Cairis and I spent a very quiet day preparing some things for a friend to sell at her car-boot sale. We piled them up ready to go and then had to pop down to the harbour to bring Dad and Uncle Miles back from their trip to Sark. The weather was lovely, as it had been all weekend, and the men had had a lovely trip, if a slightly lumpy boat journey home. While we were waiting, the wives were oohing and aahing over the Imperial Princess, which was moored nearby.

Monday is always a short day, and today was no exception. I started a new proficiency class with students from all over the world. This was great, as the mix of nationalities and ages will make for a few interesting weeks :-). On the way home I saw that the Big Top for the music festival was being dismantled. It provided better acoustics than expected. The festival turnout was lower than expected, but I think that the dates clashed with Sark, so they need to organise the times better next time:-)

Tuesday 3rd July
Damp in the morning and then lovely in the afternoon. This has been a feature of several days this week. At least we are at work in the day-time so the weather is less of a disruption. At the moment the island is covered in Agapanthus plants, making clouds of blue wherever one looks.

Wednesday 4th July
Today I left for work as normal, not expecting any drama. At lunchtime I heard that there had been a gas explosion in the  pressurised gasometer near my home. Not thinking much about it, I drove home at the end of the day to find that my neighbours and my family had been evacuated in an exclusion zone of 400metres, because of the risk of explosion. For public safety reasons, no-one was allowed to go back home - not even to feed the cats! http://www.bbc.co.uk/news/world-europe-jersey-18718353 Cairis had done the sensible thing and walked down to meet her father at his office. I wandered down to meet her and we wound up at the yacht club. M was taking part in a sailing race, and already had some clothes to change into in the car.
Cairis and I ate there, and she stayed glued to the internet for news, while I watched the boats.It looked as though we were going to have to find somewhere to sleep for the night. Friends began to contact us offering a bed for the night, and a Facebook site was set up really fast to offer support, food, bedding, and anything else needed. The island is always amazing when help is needed! As M didn't get back until it was late, we decided to stay in a local hotel which was offering 'refugee' rates- and toothbrushes etc. which were very welcome.

Thursday 5th July
The gas fire was still burning, so we had breakfast in the hotel and headed off to work. The police update said that the exclusion zone had been reduced, and modified, as the wind had changed direction. Many local schools were closed and Cairis decided to wander down and see when it would be possible to get in to feed the moggs. When I got home I could see that the gasometer had been partly dismantled and the fire appeared to be under control. It is not really logical to have a gas plant in the centre of a residential area, and plans had already been put forward to move the tank. It has been decided to decommission it and move it as soon as feasible. You really don't value your home until there is risk of it going up in smoke- we were all in bed early after the drama of yesterday! 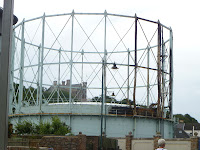 Friday 6th July
Friday can be quite sad as it's the day when my favourite students leave. One of our lovely Italian students is returning home after 12 weeks with us, so it is hard to say 'goodbye'. I think she will be happy to go home as the weather seems to have taken a turn for the worse. In some ways it is good that it is raining, as it is helping to control the fire, which is still burning gently. It has meant a change of venue for the usual Friday afternoon walk, and the students are now going to do something inside before having dinner in a local restaurant. 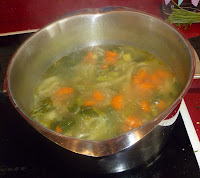 The weather is still very wet and windy, but when I see the  UK flooding on the television, we really don't have much to complain about. Today I booked our visit to the UK for Cairis's graduation in a few weeks. I then decided to sort out the laundry and the recycling. You can tell that I have no inclination to go outside today:-)
For lunch I prepared some vegetable soup.I think that this is the first July ever that we have soup on the menu- it is normally my comfort food in the depths of winter! Anyway, looking at the outside world it could easily be the depths of winter- it's so dark and dismal. BUT- we are at home, and safe, so I'm not really complaining!!!