Well, that's the half-way mark passed, so we're on the homeward strait now :-) Weather this week was weird - every morning started with rain, and every afternoon was bright and sunny! Very much an in-and-around-home week where my pictures are concerned. 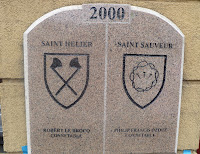 Today the sun shone- in direct contrast to yesterday. Managed to  do some gardening , took a drive to the recycling centre and drove out to the honesty box for my weekly flowers. On returning home I put the car away and noticed that the Parish crests had been repainted. I live in St Saviour, which is just over a  waterline separating it from St Helier. This is where the Parishes divide. 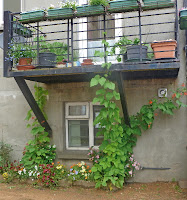 I am always impressed by people's ingenuity, especially when it comes to finding ways to have plants with no garden. As I walk back from the supermarket I usually look at the flat tucked in the corner of a local commercial complex. I nicknamed the old man who lives there 'Jack' , as every year he manages to grow an impressive beanstalk from a scrubby piece of land at the edge of the car park- right up to his balcony, and it has a surprisingly good yield, too:-)

Tuesday 10th July
When I finished work today I decided to de-flea the cats. They don't enjoy it, and I hate chasing them  down to do it. Unfortunately, it looks as though I was a bit slow and Maisie was beginning to scratch 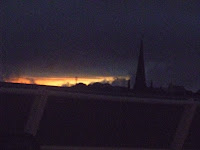 ( The vet later said that it was a problem caused by the bizarre weather, and everyone seems to have a slight problem). I bought a couple of flea killer bombs, and decided to take the family out for pizza while they got to work in the house. The view from the car park was wonderful as we returned  home.What a lovely sunset- but no red sky promising a good day for Wednesday.


Wednesday 11th July
Today I went to the gym after work and someone was having a jewellery sale on a table in the gym. I had a look, but as I don't wear much, I took a photo to show my friends- and was able to go back and buy some the next day on their behalf. It does pay to carry a camera around with me:-) 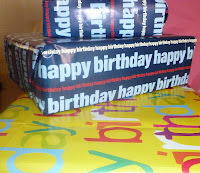 My husband's birthday is at the beginning of next week, and I ordered some bits online to give him as presents. They arrived at the house today, in an enormous box- NOT very discreet! I decided that the best thing would be to wrap the things there and then, hide the gifts, and get rid of the box.
Friday 13th

My daughter loves Friday 13th, as she was born on one, and we have a black cat, so there is no point in being superstitious in our house. Today I said goodbye to some more of my students. One of the Hungarian Au pairs was returning home, and brought in some delicacies from her country for her teachers and classmates. They were mildly alcoholic, which meant that the afternoon lessons were a bit silly :-) In the evening we met up with the other musicians in a pub on the East of the island and noticed that Colin had bought himself some bongos. There was a lot of  good-natured ribbing but I don't know if he'll bring them out in the future :-)
Saturday 14th

I'm planning a birthday party for tomorrow night and decided to try out Chiew's recipe for chocolate cake to die for:-) My friend is gluten intolerant, and this cake doesn't need flour.  Thanks Chiew !!

Her husband is a thespian, and tonight we are going to the Arts Centre to see him in his latest play. The island French natives are celebrating the 'Quatorze Juillet' round the corner, in the Lieutenant Governor's residence, so it's actually a good idea to go out :-)
Posted by Unknown at 17:52