What a busy week this has been. It seems as though everything happened at once- and fortunately the weather played ball. Looking back, I seem to have been snap-happy this week.  I didn't manage to limit myself to only one photo per day, but I had lots of fun and some interesting experiences:-) 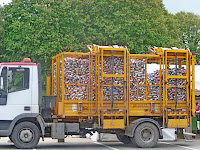 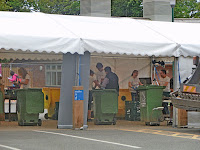 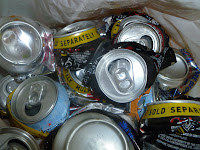 Today the Olympic torch came to Jersey. The Avenue was thronged with spectators cheering on the runners and every Parish got involved in one way or another.

I decided to avoid the area, and headed North instead, in the direction of Durell, our world famous wildlife preservation trust. They were trying to raise money for the rainforest and wanted to see whether they could collect 250,000 aluminium cans in one day- the record  already being set at 158,000. I gathered up my collection to add to the pile. Unfortunately, we were later told that they had fallen short of their target- but it was the first time they had tried it, so maybe next year they will do it. 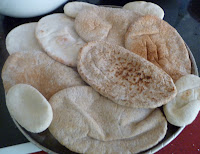 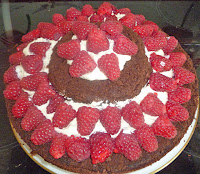 In the evening, I invited friends round to celebrate M's birthday, and we finally had the yummy cake I made from Chiew's recipe. I made a couple of Greek salads and we ate them with marinaded chicken breasts and pitta bread. 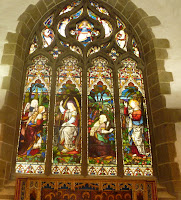 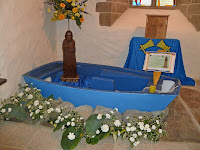 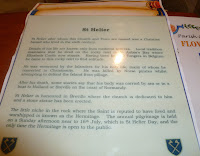 Today was the actual birthday and it was also St Helier Day. Our pro-cathedral, the Town Church, is dedicated to him and there is an annual pilgrimage from the church to the hermitage where he lived. The  church  is celebrating by having a flower festival inside. We went in to have a look, and the flower displays were beautiful. 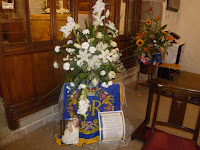 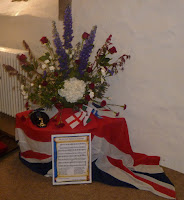 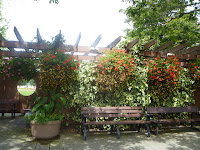 Flowers certainly seem to be a theme this week. Everywhere I look there are hanging baskets and street displays. No wonder Jersey is often called L'isle fleurie. Even the big euro-bins are hidden behind flowers in the centre of town.

Wednesday 18th
More flowers today. This time it was the turn of the Central Market. Prince Charles and his wife, the Duchess of Cornwall, paid a visit to the island today. I was at work, so I didn't actually see him myself- but some of my students played truant and one of them shook his hand- and says she'll never wash it :-) 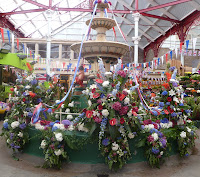 The market was going to be on the tour list, so the central fountain was decorated.


I decided to wander down into town to look for a frock for next week. The mother of the graduate would like to look smart in the photos too :-) I didn't find anything that set me on fire, so I abandoned the search and decided to meet my friend for a coffee instead. She offered to give me her opinion at the weekend, so I'll wait until then to spend my money. We met near Charing Cross, where there is a curious statue of a toad on a pole decorated with mediaeval curses. Jersey people are known as Crapauds, or toads, and Guernsey people as as donkeys. I'll explain  why another time.
Friday  20th
End of the week, and time to start thinking about my break:-) I heard on the radio that a Viking ship was coming into the harbour from Norway. Her name is Gaia, and she is a replica of a ship found in a boat grave.. I popped down to the harbour to have a look at her. She is rendezvousing with a couple of other vessels before making her way to the UK in time for the Olympics, next week. One of the other boats was already in port, a sail training ship called Next Wave, run by a Christian charity for youngsters. 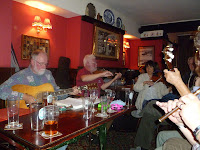 Later we went down to the pub to meet our musician friends for a jam session. This time it was the Farmer's Inn, in St Ouen.
Saturday 21st

Officially on holiday now, yay!! And the summer has decided to arrive properly. Met up in town to recommence the dress shopping- I really don't enjoy going in and out of shops on warm days :-(        We started in the shops around the Royal Square, and there were pigeons everywhere. This is the centre of St Helier and the site of our Parliament, known as The States. At one end is a plinth with a golden statue of King George.