The weather has been a bit up and down this week. I probably noticed it more as I was at home and  the painters down tools the minute the rain comes!.

Sunday 26th August  2012
This morning we were surprised by a lady who rang our doorbell. She wanted to paint her house in exactly the colour we have, and came to ask the name of the paint:-) 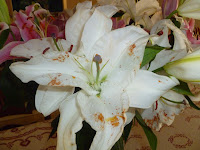 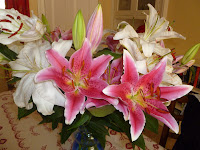 Today I had a panicked call from a friend whose washing machine had died- just as her son decided to give her a year's supply of washing. Okay- slight exaggeration- but you know teen aged boys! I spent the day being a good friend, doing her laundry and laughing with her. She brought me the most amazing bunch of lilies as a thank you. The smell is a bit overpowering, but they look fantastic.
Monday 27th August 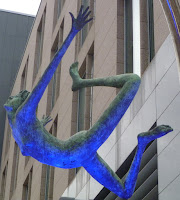 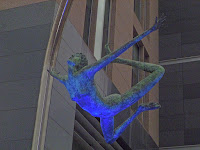 Started a bit damp, but I was only expecting to do one lesson and then return home to prepare for next week. The best laid plans......One of my colleagues was sick, and I was there, so I ended up teaching a nice group of intermediate teens. No painters today- it was the last Bank holiday of the year. M. went down to play with his boat and Cairis helped me mark the phonology tasks which came in the post.We went out for a bite to eat, as it was a holiday and I was feeling hard done by, after working most of the day. The bronze statue of 'freedom' next to the new mall was lit up. It was opposite the restaurant we chose- although being a bank holiday there was not much choice:-)

Same as yesterday, I taught the youngsters and then left for home. It was sunny today, and the painters were painting the white edging round the windows.I mentioned the lady from Sunday, and they laughed and told me that they had been giving a painted piece of cardboard to 2-3 people a week, since they started working on our house. We now have a coat of paint on the garden walls too. 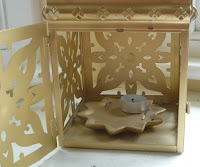 Having worked the previous two mornings, I negotiated the rest of the week off. This gave me time to prepare the timetable for the course and to organise some last minute paperwork. I also interviewed a couple of people for later courses. I managed to drag Cairis to the Gym with me- it's much more fun when you have a buddy to go with:-) In the evening it was great to watch  the paralympics opening ceremony. I stayed up until midnight to watch it, everyone else went to bed and left me with the cats:-). I found a couple of old lanterns when I was clearing out a cupboard. They were a bit rusty, so I sprayed them gold and will be able to use them as the nights begin to draw in.
Thursday 30th 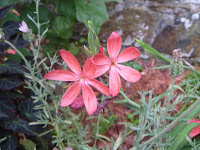 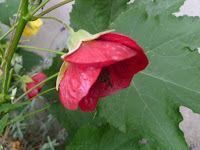 The painters said that they could probably finish the high bits today and the scaffolding might be able to come down at the weekend. The white markings round the edges of the windows, and the window ledges, make the house look clean and fresh. Cairis says that it looks like lemon meringue!
We decided to do a large shop, and put some food in the freezer for next week. That will make life easier, as Cairis is going to do my course and there will be no-one at home to start dinner. I got out into the garden while I had the chance, and there are some flowers I don't know the name of. Perhaps someone will be able to help! 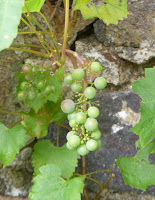 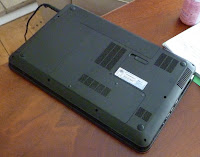 Today there was a 'blue moon' which I hoped to see later, but it was shrouded in clouds.The painters put a coat of the door colour round the edges to see if we like it- of course I do- I chose the colour ! I'll be happy when it is all finished.I'm going back in to work to set up my room for next week. The group is 12 strong, so I'm having one of the larger rooms to allow them space to spread out. I need to move all my equipment and files upstairs! Cairis had to take her laptop to the Computer Hospital- luckily she can borrow mine for the start of the course next week!
In the evening we went down to the Smugglers to play music. We were supposed to go to the Farmer's inn but they had a function on. I noticed that the grapes in the garden are slowly staring to change colour- that means that Autumn is on its way :-) The colours will be fantastic.
Saturday 1st September 2012
Well, disappointingly, the scaffolding hasn't gone. We spent the morning watching the paralympics- the athletes are amazing! 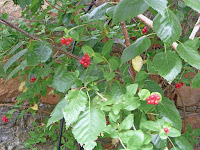 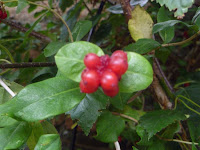 I noticed that the honeysuckle flowers have turned into berries, and I have seen a lot of other berries around the island- folk legend suggests that is the sign of a hard winter to come :-(