CPD at its best

My Boss, who is very enlightened and really believes in offering good quality CPD to his staff, came up trumps today. The teachers have been complaining recently of students who seemed at odds with the norms we expected from them.  We are trying to promote inclusion in society today, so we need to have advice on how to handle people who are different to make sure that their experience is safe and positive.

So he organised a visit from Autism Jersey to help us recognise, and find out how to deal with, students whose brains are wired differently. .
We were visited by two practitioners. One deals with high functioning individuals, and the other with people who have more difficulty in their day-to-day life. The latter, C, did his CertTESOL with me many years ago and has an affection for the college, which meant that he was only to happy to help and has promised his support should we need advice in the future.

Autism belongs to a raft of problems which come under the heading of Pervasive Development Disorders. Most of us are termed neuro-typical, whereas neurologically,  in certain conditions the brain is wired differently. This led to misdiagnosis in certain cases,  which are only now being recognised as being part of the autism spectrum.
The new rules have abolished the part of the spectrum known formerly as Aspergers. It is now seen as high-performing autism, in a scale of many forms of the syndrome. This has led to some problems, with some people who were diagnosed as such in the past feeling that they have lost their identity.

How can it be recognised?

One of the most important alarm signals is the inability to relate socially to other people. The list was presented as follows:
An example was given of a worker who went to the pub with his colleagues after work on Fridays. He didn't pick up the cultural norm of having a couple of drinks and then going home, as he was unable to make sense of the things we are aware of without being told. The poor man would stay in the pub, drinking until closing time, until someone drew his attention to how to behave- and changed his habit.

Boys are four times more likely to present with symptoms- although girls can also be better at masking the problems.

Apart from the social difficulties, language difficulties can constitute another major set of problems. These communication difficulties are:
Again we were given examples : There was a woman who panicked when her boss asked her to pop her head through the door !!
It was pointed out that a person with autism starts the day with a 75% stress load. This could mean misdiagnosis as an anxiety disorder.

Many autism sufferers have a wide sensory need. This is being recognised more, as the guidelines are being rewritten according to new evidence. These people may have hyper or hypo sensations. eg. The person who can drink boiling hot drinks without feeling the heat, or the child who didn't realise he had broken his arm, or the one to whom a touch on the arm felt as if he'd been run over by a bus.

Special abilities are sometimes associated with children with autism.
Again an example was given of a man taking part in a pub quiz. The category was American Presidents. This was a particular speciality of one of C's charges. But he not only knew the answer to the question of which president, he could tell you how long, and which dates he was in power, who he ran against, how many votes secured his place,his wife, children, and dog's names... 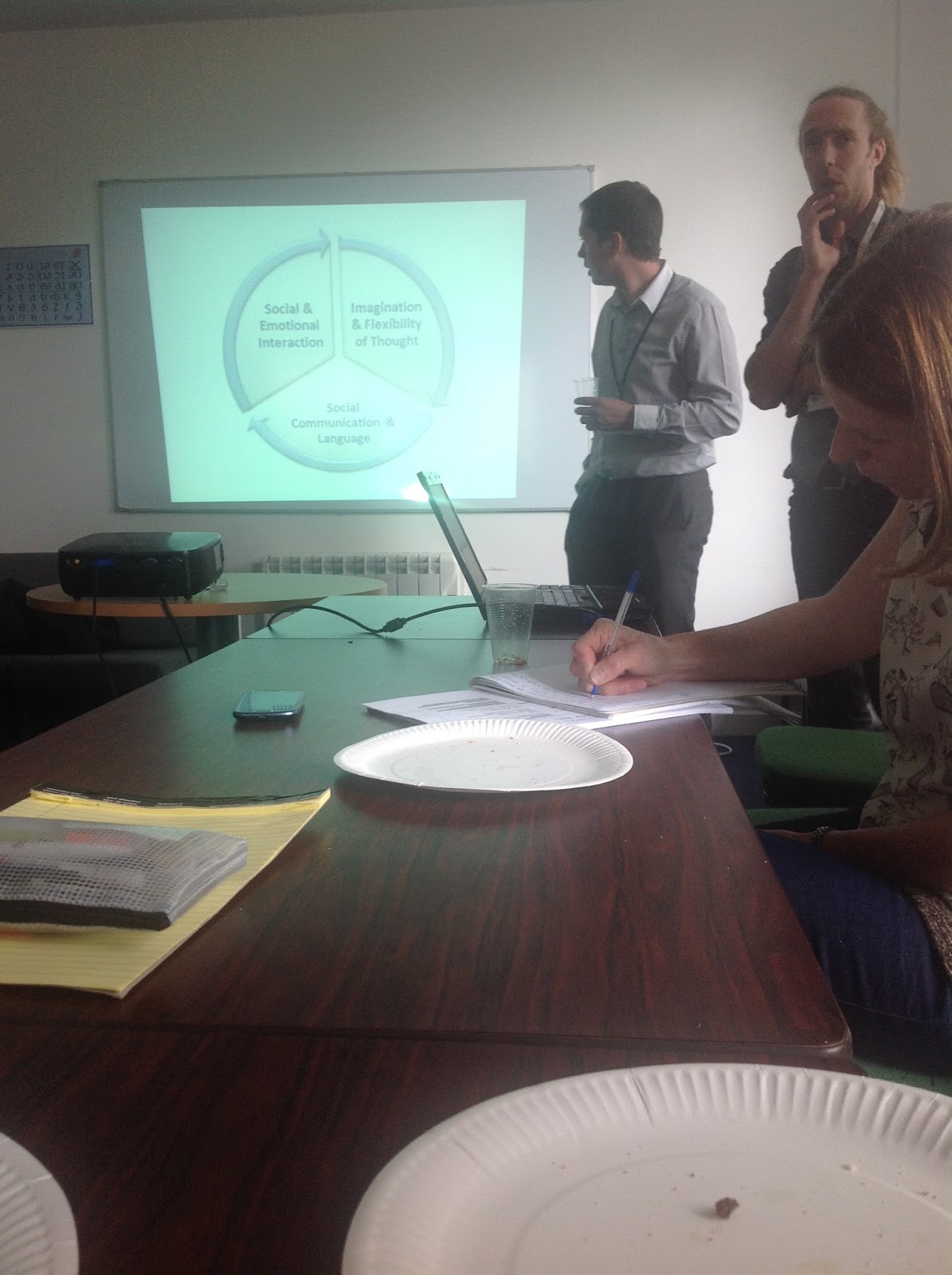 . This shows the three main areas, being changed at the moment to include the sensory field too, of impairments.
Social and emotional interaction, Imagination and flexibility of thought, and Social communication and language.
In 1979 Lorna Wing and Judith Gould published a paper which identified these as the three core areas which people with autism might present with.
It was shown that the triad is almost always accompanied by some, if not all of the following:

How can it be diagnosed?

It should always be diagnosed by experts. In the case of children, normally a team of educational experts should be asked to do evaluations. It is foolish in the extreme to try any of the online self-tests.  The alarm bells should ring in the presence of unusual developmental and behavioural features, or in the absence of what would be considered normal, particularly if these co-occur.

It stands for:Structure,Positive approaches and expectations,Empathy,Low arousal and Links with other professionals

This attempts to understand and respond to the unique needs of the individual with autism by applying holistic principles of what is understood to be best practice. It is the foundation for all other interventions or approaches and creates an autism friendly environment. In fact- if it is friendly to people with autism, then it will generally be helpful to everyone :-)

What does this mean for teachers?

Above all- keep the communication lines open with all concerned: Parents,colleagues, other professionals and don't feel that you have to go it alone.