My blog has had an amazing number of readers this week. When I opened it up to write this post it had had exactly 600 visitors since the post I added on Monday.

This is week 18, and the year is just galloping along.

It was Miles' birthday this weekend, so I had to pop down to the fishmonger to buy his favourite Bass for dinner. In the late afternoon I had a chance to add my point of view to a webinar for the VRT, presented by Shelly Terrell. My poor husband thought that I was just a participant, as I had been for part of the weekend, and he could be seen on my webcam as he moved furniture around in the office :-)

Every couple of weeks during the Spring/Summer we have a CPD session. Sometimes they are done in-house and sometimes we bring in outsiders with specialist knowledge. Today was one of those times and we had two men from Autism Jersey in to talk to us, and offer ideas to help us deal with possible problems in future. The post before this one gives a good account of the session.

On Tuesday, M asked me to sew Velcro onto his new bell pads, which he needed for May Day. I was too busy watching TV as I did it, which goes to show that multitasking is not very efficient. I managed to sew both pieces onto the same side- and then had to unpick it and start again! I then had to prepare a bed for my brother-in-law who was arriving to do yet more work on his boat :-) 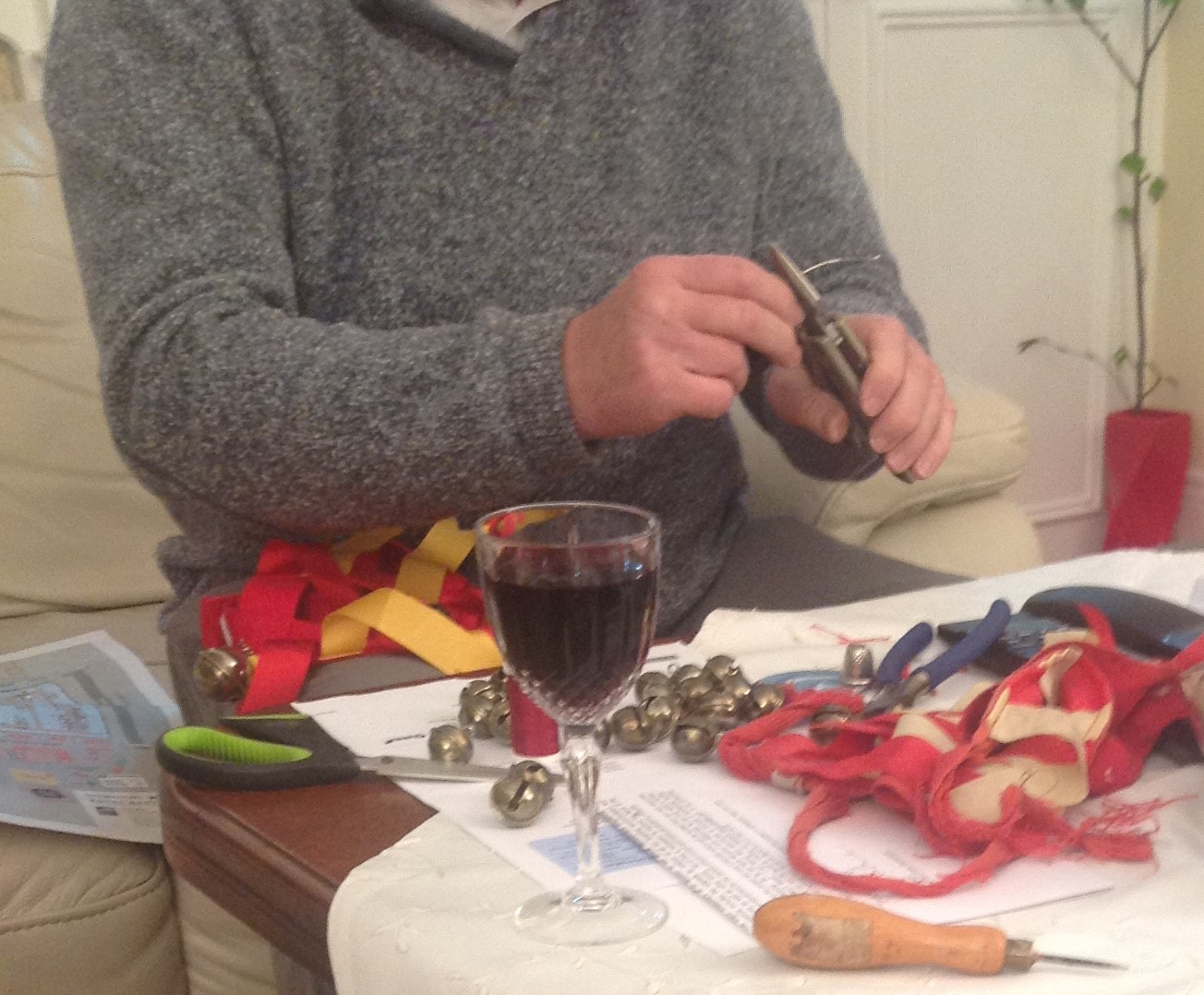 Malcolm came home early to put the bells on his pads. It was the first sailing race of the year, but there wasn't enough wind, so after drifting about for a while, the race was called off.  We went to bed early so that we could get up bright and early the next morning. I suspect that our visitor would have preferred to be here next week, and had forgotten that we get up at 4 in the morning.

May Day. We were up very early this morning to welcome in the summer. We tried not to disturb Iain, but it is hard to get ready without making any noise. Cairis came too, and we set off for Mont Orgueil Castle to start the day off, after her father had put on his blacking. The tradition of Border Morris belongs to the villages on the Welsh borders. They used coal dust to black their faces in order to hide their identities at a time when dancing was punishable by Cromwell's men. The Helier men are dancing Border all of this year, instead of the Cotswold's dancing they have done previously.

After work I went for a walk along the beach. I was starting to feel the lack of sleep from the day before, and didn't want to mess up my routine by having an afternoon nap:-) I chose to walk on the south east of the island, at La Rocque. The new timetable for walking dogs comes into force on 1st May,  and the schools were still at work, so the beach was deserted. I love the clean sand and watching the little boats bob up and down.

Today Cairis and M decided to go to the annual International Boat Show. As I have mentioned before- I don't do boats!! I wished them a good day and left them to get on with it.

I had great fun in the garden instead. I was pleased to see the tiny Christmas tree which I had had in my hall in December. It had roots, so I put it outside until I knew where I wanted to plant it. It is now almost double its size:-). The pale coloured leaves are the new growth.  Obviously my garden agrees with it.

The lavender  and herbs are also looking good for the time of year and the silver birch is finally in leaf. Having found my really thick gardening gloves, I was able to tie the rose bushes in to the trellises.  My gloves were on a shelf in the laundry, where I had placed them at the end of last year, after I washed them. Roses are so beautiful in flower, but I hate the thorns and these ones have millions of tiny sharp thorns which catch on everything.

Next week there are two Bank Holidays, neither of which I get off. I don't really mind as I have never known any different, but it means that we have to negotiate over who keeps the car. Cairis and M are planning to go sailing and I'll be at work, so I don't suppose it will be me :-)