Another week has passed.
This one had TWO Bank holidays in it- and as usual I worked a five-day week :-) 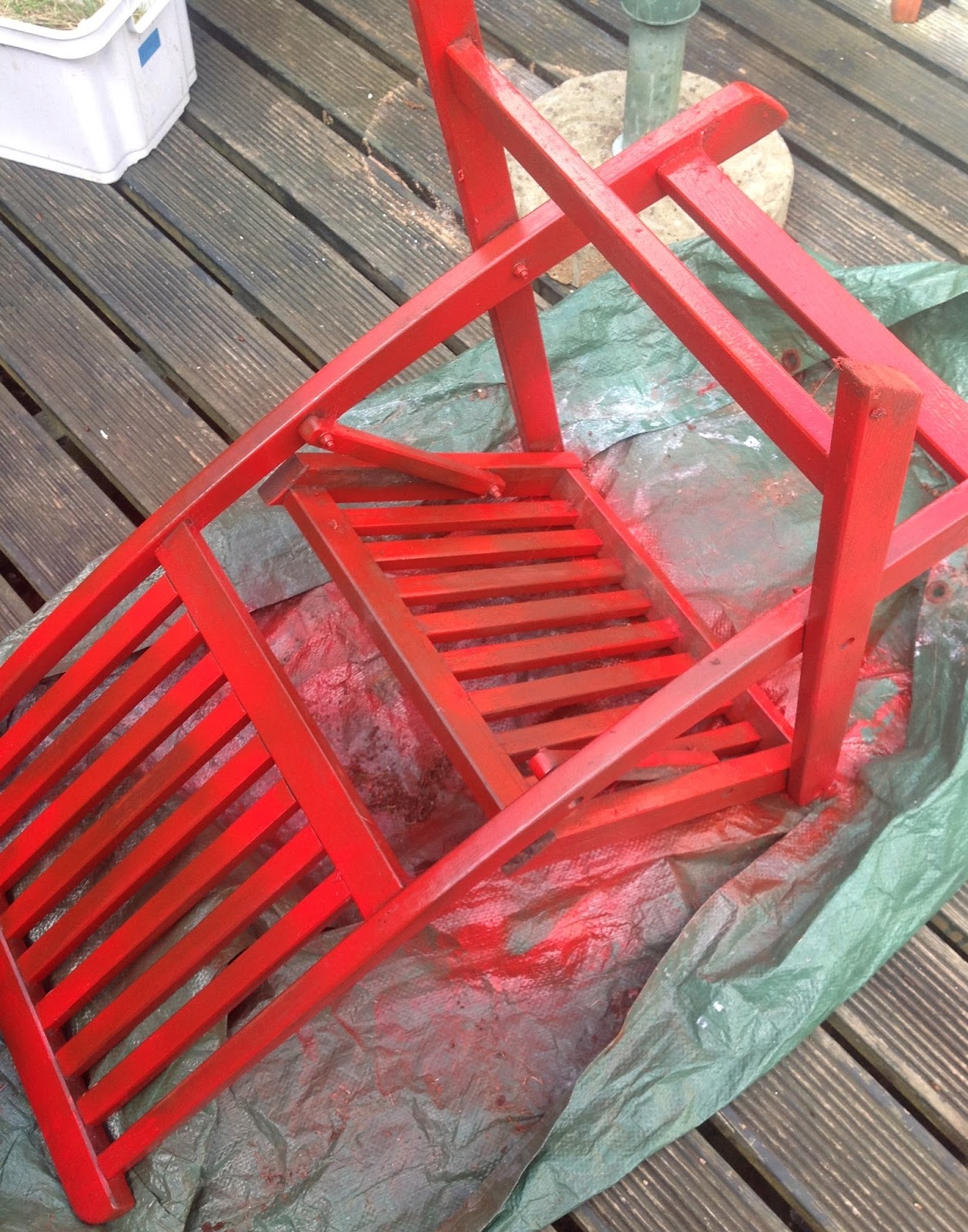 Today was bright and sunny so I decided to paint my old garden chairs. I chose a lovely bright red- no surprise there! Unfortunately Cairis and Malcolm had been out to B+Q and bought some new garden bench cushions and a parasol in a bright purple- clash!!!  I wasn't aware that the store was open on a Sunday, but it was only because of the holidays that they had been given dispensation to open. I will have to keep the red ones on the patio outside the kitchen- and put the others at the bottom of the garden. Or I could repaint:-(

As this was a bank holiday it was the perfect time for the dedication of the cabin in memory of my colleague who lost his fight with cancer. We each made a cake, and after we had finished teaching, we met at the cabin, where members of the family were waiting, together with past colleagues, some of whom we hadn't seen for years. We put a donation for Hospice in a collecting tin. There were some pieces of cake left at the end, which we offered to the students at 50p a slice. In the end we collected just short of £250.00

Today was windy but dry. The forecast for this week is really changeable. My Students are very nice, and we discussed the trip to Samares Manor which they had done on Monday. My private student is incredibly knowledgeable about gardening. I think that spurred me on to do some work when I got home. Everything is starting to flower now. The campanula on the wall- and on walls all over the island looks wonderful. It is such a vibrant blue. 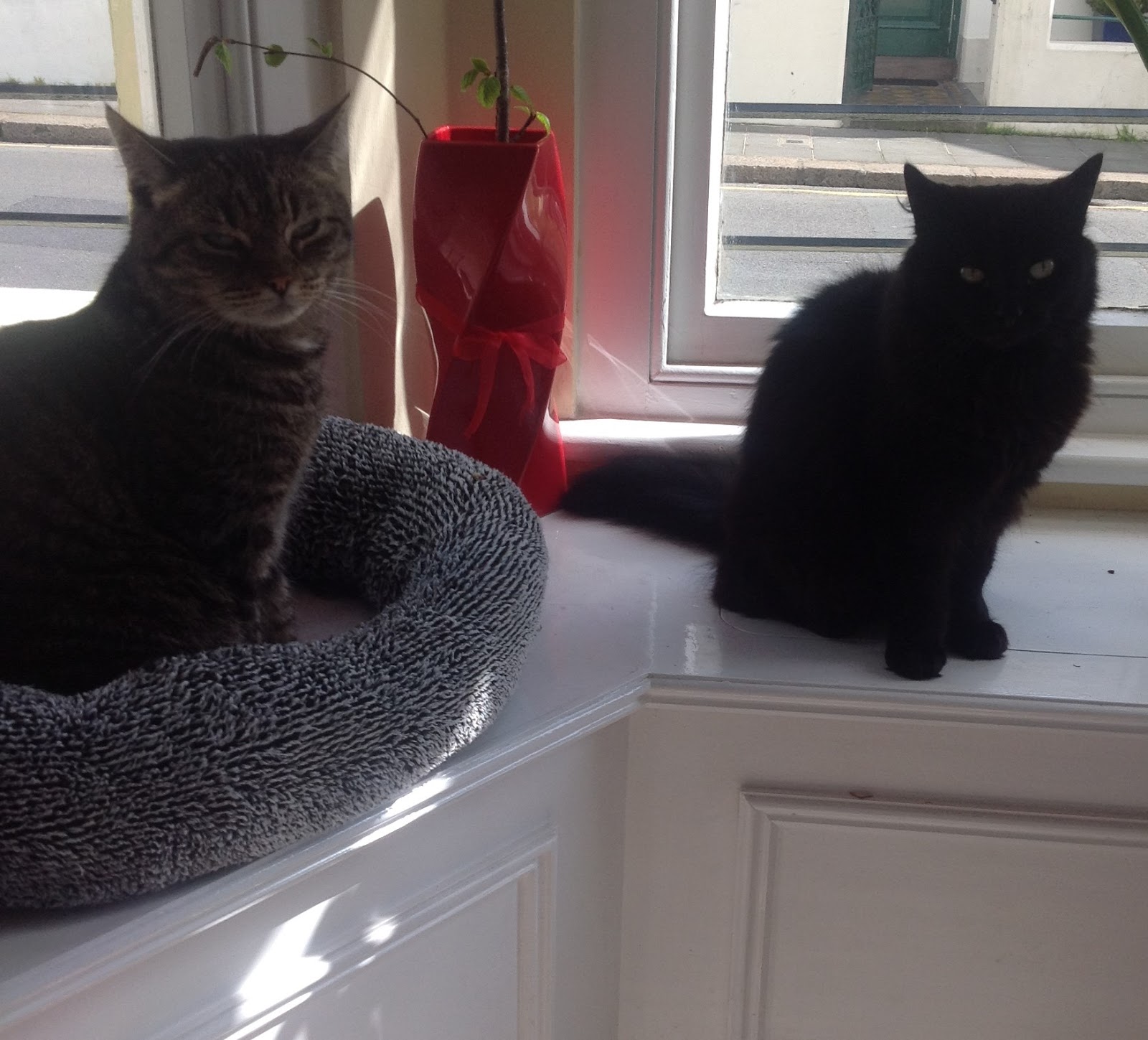 Wet today. Slight disaster when the dishwasher decided to give up the ghost. M had a look in the local appliance store near his office, and I did the same. We compared notes in the evening and chose one, which, of course, we couldn't order until Saturday, due to the bank holiday:-) I got home to find the cats curled up watching the world go by and thought about doing the same. Unfortunately I had offered to try to recapture the tweets from the lunchtime #ELTchat, and the website wouldn't play ball! I spent ages trying to get it to work. I then received a call from Carl who had lost his scanner software. I popped down after dinner to sort it out for him- leaving Cairis and M to do the washing up...by hand!

Today the weather changed every five minutes. It started dry, then rained heavily, then dry again. I got a nice picture of the college garden bank when I parked underneath.
The different shades of green are lush. I booked a holiday today which gives me something to look forward to. We are going to Switzerland at the beginning of June :-) 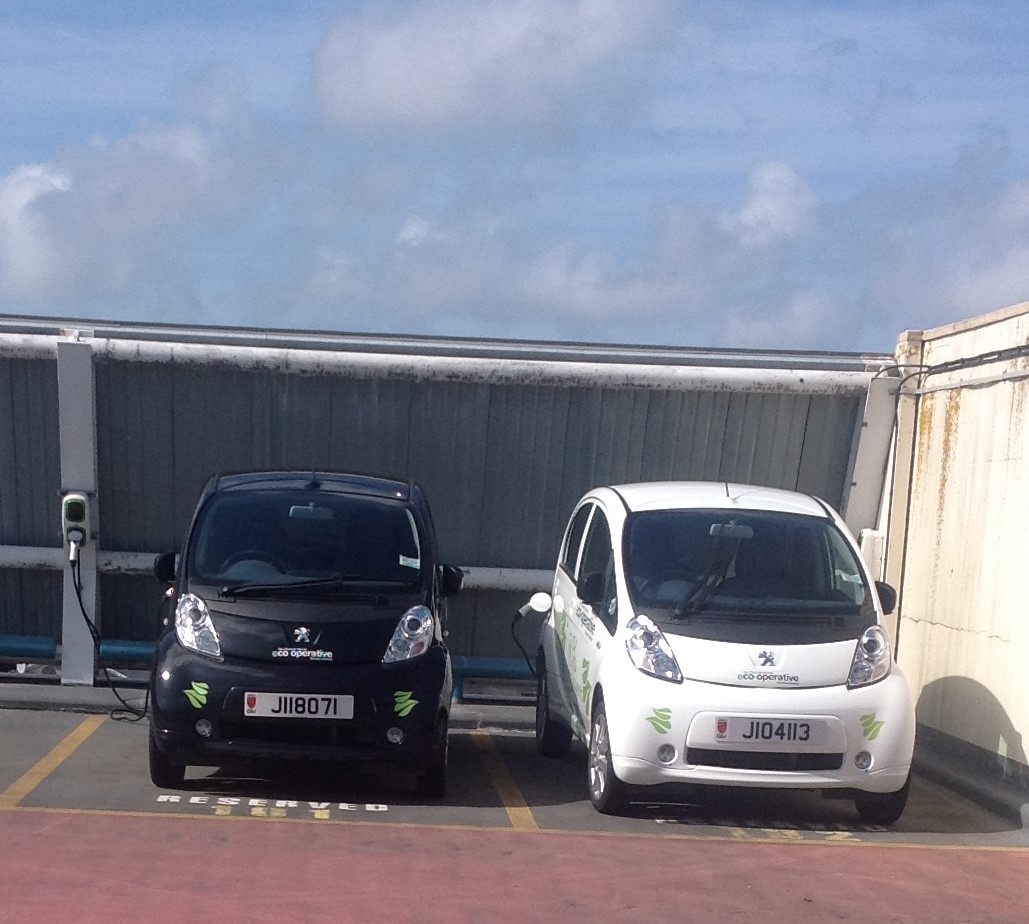 Liberation Day! Today is the 69th Anniversary of the end of WW2. M and the Morris men were invited to the Guernsey celebrations and Cairis decided to go along as their photographer.  I'm glad that I wasn't going as the sea was seriously rough. I dropped them at the harbour for the ferry on my way to work. Both the Island flag and the Union flag were flying today, to commemorate the arrival of the British troops. No-one was around in the parking garage when I got home, and it was unusual to see the two electric vehicles charging in the corner. In the evening we met the other musicians for a very pleasant end to the week.

Today started well. Cairis and her father went out to organise the dishwasher, and have breakfast at the yacht club. I took the opportunity to do some housework. I was surprise when Carl arrived with some tulips to say thank you for sorting out his computer. They looked nice on my fresh tablecloth. In the evening I had a fun time on FB with a back channel party for the Eurovision Song Contest. It was set up by Fiona, an ELT teacher based in Spain and had participants from all over the world. I have never watched the whole thing before, and had a real blast sharing points of view with teachers from Greece, Spain, UK, Israel, Portugal etc.
Next week should be back to normal. I'm not looking forward to the washing up after Sunday evening's 3-4 course dinner, but the dishwasher should arrive at some point, as the shop has them in stock.
At least everyone will have to work a full week like me :-)