Week 33. A big week for the island, and a stressful week at work! 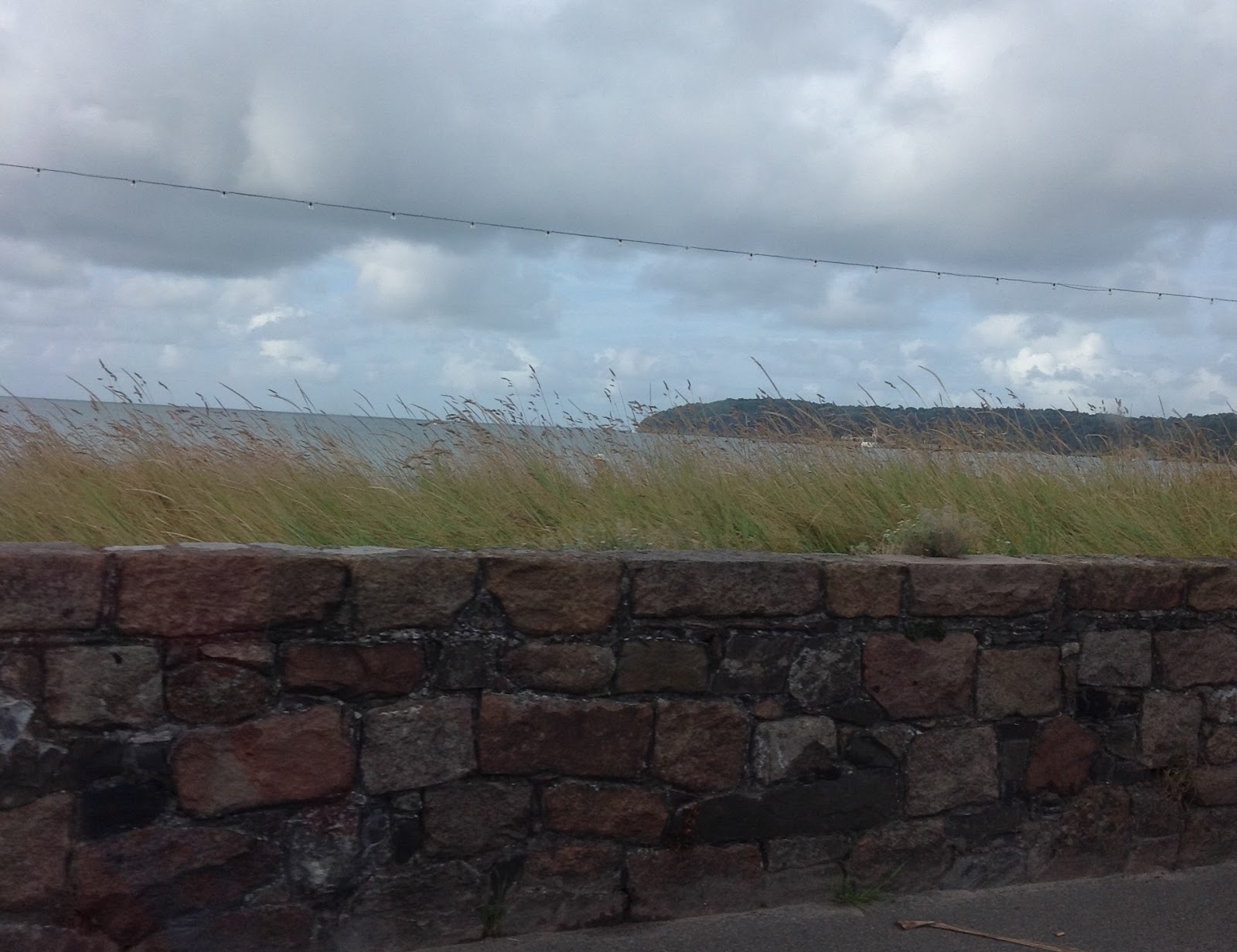 Today M decided that he needed the car, so he gave me a lift to work. It is school holiday time, so there isn't much traffic on the roads at the moment. That will all change later in the week. We were late , so everyone had taken the best parking spaces- lots of new students who had brought their cars over on the ferry. It was still very windy- Bertha had not quite finished with us, and there were some water spouts seen around the coast. As I wasn't driving, I had time to take a photo of the granite wall on the seafront. I love the pink colours of the Jersey Granite. 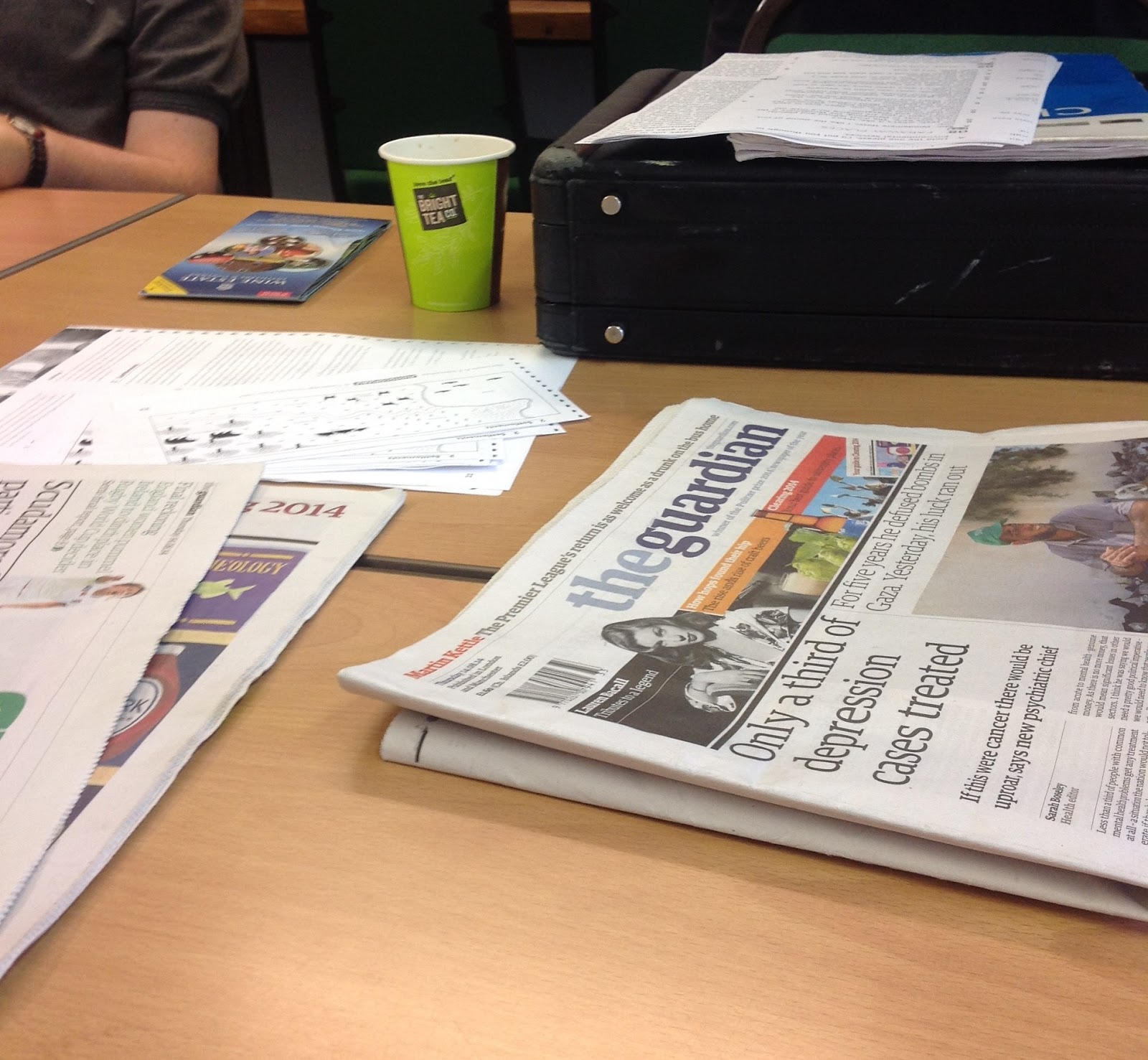 BC inspection at the main college. We had to prepare very detailed  lesson plans for each of our 3 lessons. Some of my colleagues found this very stressful. I don't mind doing it, and in order to see where I am in a plan, I like to add a little icon for a quick look. The newspaper shop made a mistake and sent us a Guardian instead of our usual Independent, but it got the thumbs-up from the inspectors, so we didn't say anything :-) Having put together 3 plans, I realised that they would likely come in to my Business Class in the afternoon. I had two PTs in the morning, which would be a bit boring to observe. In the end I was proved correct, but I had a fantastic group, who worked like a charm. At the end of the afternoon we had a Teacher Focus Group meeting with the inspectors. 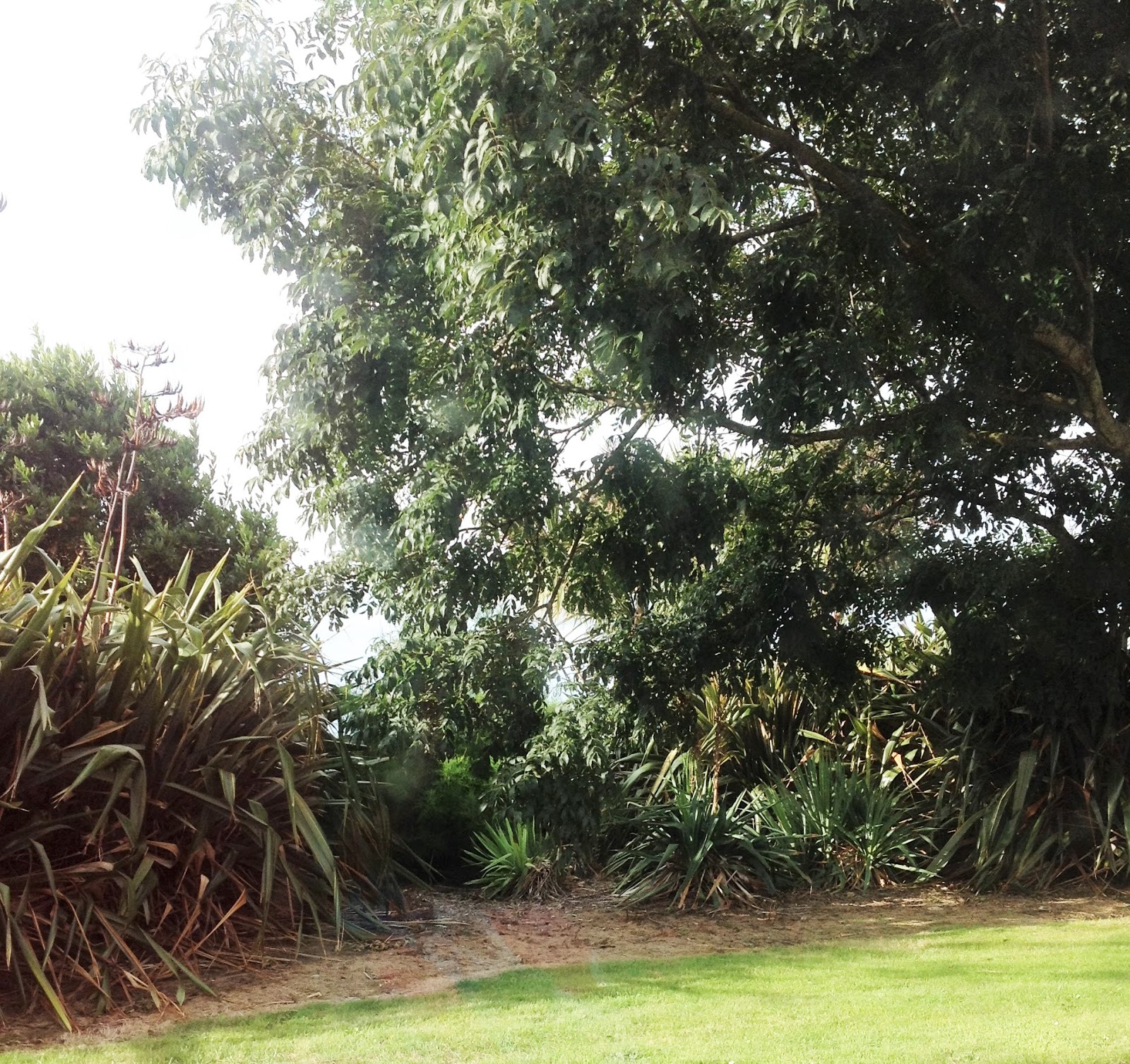 Still warm and sunny. The wind has dropped now, making the day much more pleasant. The inspectors are at our summer school, so everyone is more chilled. The casualty of all this is the iTDi MOOC, which I don't have any time to watch. I got Cairis to sign up though, and she has been enjoying some of the recordings. The sky looked pretty this evening, but the forecast for tomorrow is wet.

The long awaited day in the island's calendar- Battle of Flowers day. I listened to the radio when I woke up to find out where the big floats were. As they make their way down to the arena they sometimes have to take smaller roads- which can lead to delays for motorists. Some of the floats were already in position when I drove to work- but not the really big ones. When I finished work I had to go along the North Coast to get home- the avenue was closed for the Battle. It was a shame that the weather was dull and overcast. It rained quite heavily in the morning- I hope that it didn't cause too many problems for the float builders.

No rain today. The sun was out. It is still in the mid-20s, so not as warm as it was, but okay. The college had lots of students leaving, so we were surrounded by students taking photos of their teachers and classmates. When I finished work I had a coffee with my private students, a husband and wife team from Germany, at La Fregate.
Later, at home, I decided to pull out the leggy lavender, and created a big pile for the Green Waste recycling plant. The grapes on the vine are beginning to darken, but they are not very many, nor very big. The plant is quite elderly, and I think we are going to take it out and replace it next Spring.

Now that the deadline has passed for handing in the assignments for the course we did with Vicki Hollett, we started to share our work on our Google + site. I could work out how to get my power point on there, so I turned it into a video to upload. It took me ages to sort it out. The computer was working really slowly.

Several years ago, one of the island residents, a Dutchman, lost his 19-year-old son to bone cancer. He set up a charity in his name and each year around this time they do a sponsored walk, dressed in bright orange (including the dogs), in aid of the Teenage Cancer Trust and Clic Sargent. For the last few years he has asked us to provide some music as the walkers arrive back at base. This year it was on the waterfront in St Helier, where we were buffetted by high winds and squally showers. Most of our musicians are off on holiday, so only Miles and I were free to give our time. It was fun between showers, but we hadn't done the 20-mile walk, so we couldn't complain. A lady brought her large car round to provide us with a bit of shelter from the wind, but it didn't really make much difference.

I don't know where these youngsters found so much energy. As for us, Miles played his melodeon under his rain cape, while I just put my guitar away for a few minutes when it got too wet.