The first of these two weeks was very boring. I was so geared up to going on holiday, that I couldn't wait for the weekend to arrive.

A Bank Holiday- but I had to work as usual.
We were given the very sad news that my next door neighbour had passed away. He was diagnosed with a Leukemia-type cancer just three months ago, while on holiday in the UK. He came home last weekend, but suffered a relapse and passed away in hospital. He was a great guy and will be sadly missed. Unfortunately we will be away next week and unable to go to the funeral.

Ebony has worked out that something is going on and is following me around like a little dog. I need to be careful that she doesn't end up in my suitcase:-)

It has rained every day so far. At least my garden won't need too much care while we are off island. I spent most of my afternoon interviewing people for my CertTESOL course in October. They seem like good candidates. When I got home I downloaded a pile of books for next week. I plan to hole up and read for at least part of the time.

Some lovely Jersey Lilies. I meant to post the picture last week, but couldn't find it on the computer :-)

One short day to get through. We decided to eat out and treated Cairis before leaving her with the cats for company. I remembered to pick up some Euros from the Post Office, and  did my packing. We went next door to pay our respects, which was a difficult occasion. It's really hard to know what to say in these circumstances.

We spent most of the day in Airports, travelling first to London and then to Heraklion. We arrived fairly late, but our apartment was waiting for us, air-conditioning at the ready. 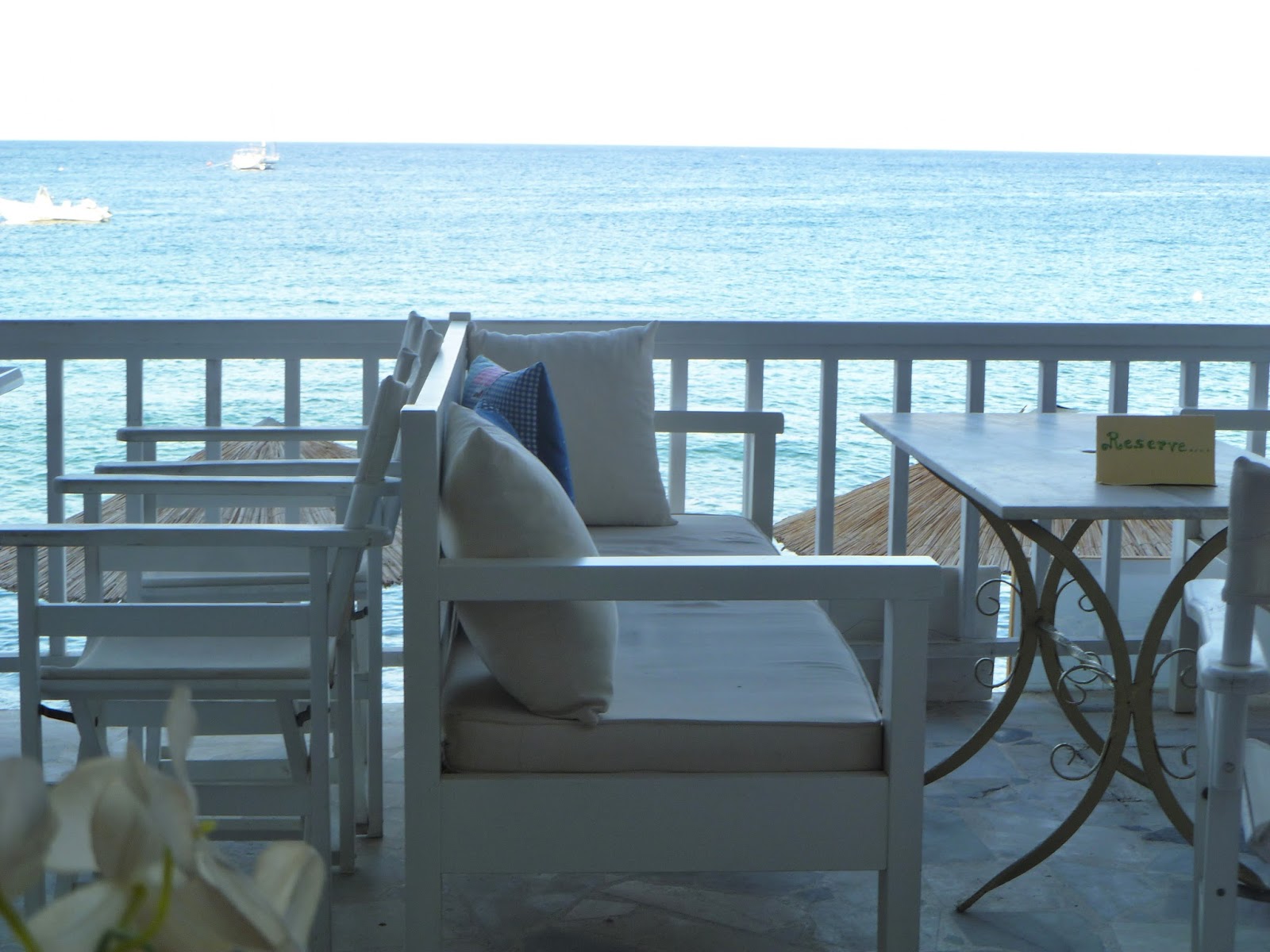 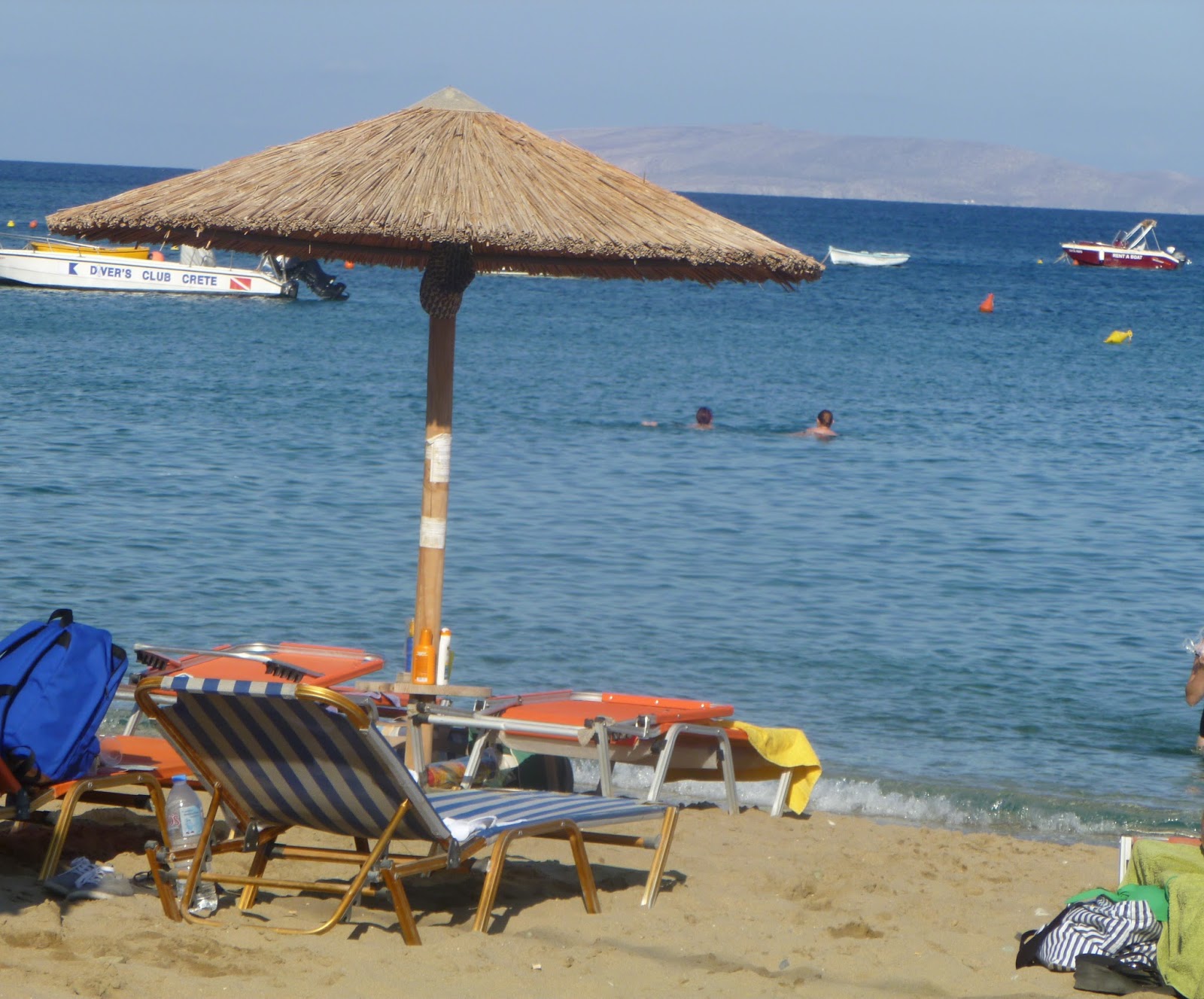 Our first full day in Crete. We wandered down to the beach for breakfast, which gave us a chance to look around the area. It only took a few minutes to walk down from our apartment. The island in the distance is called Dia and they use it as a refuge for special white goats.
We spent the day lazing around and reading under a beach umbrella. 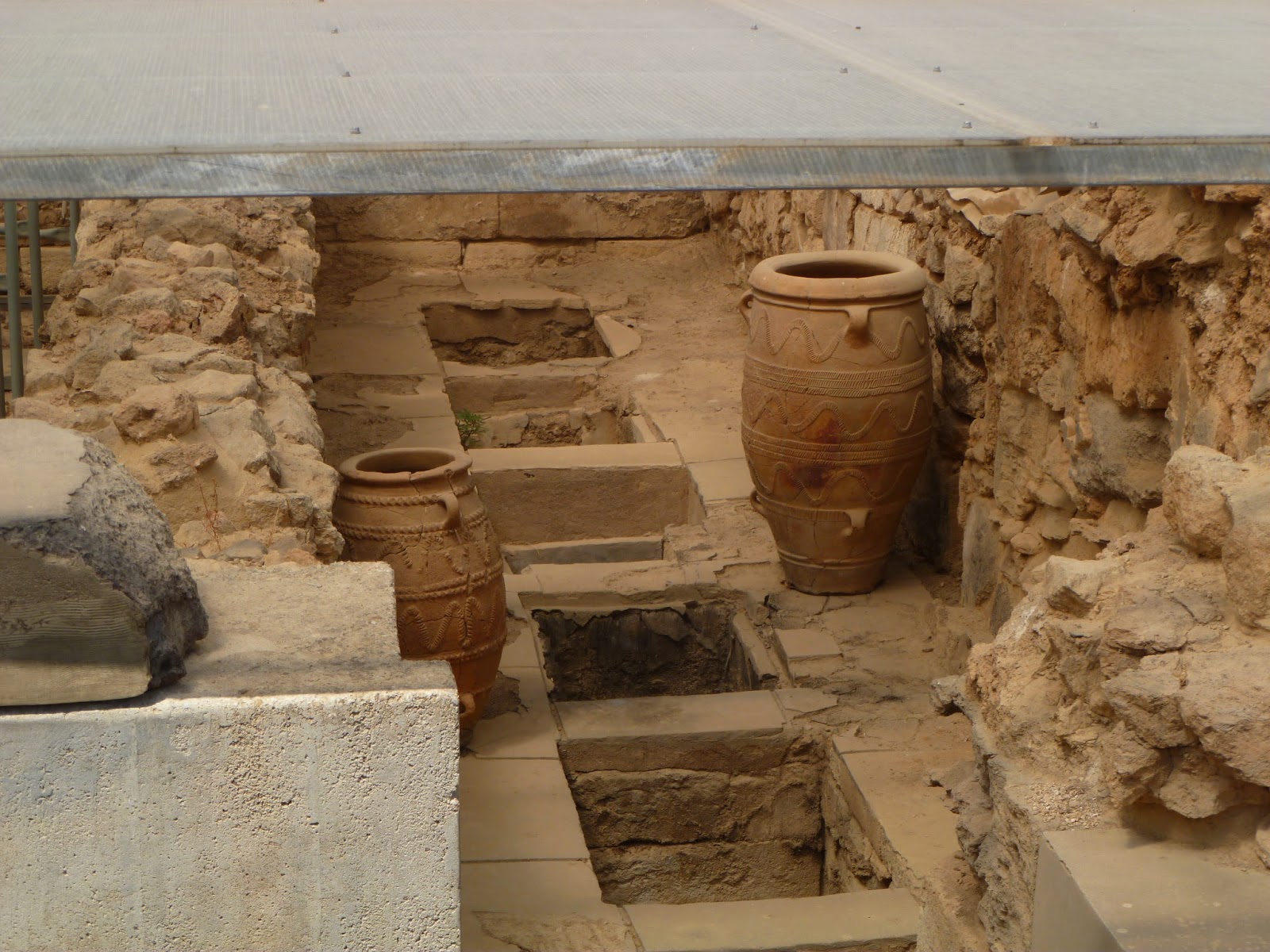 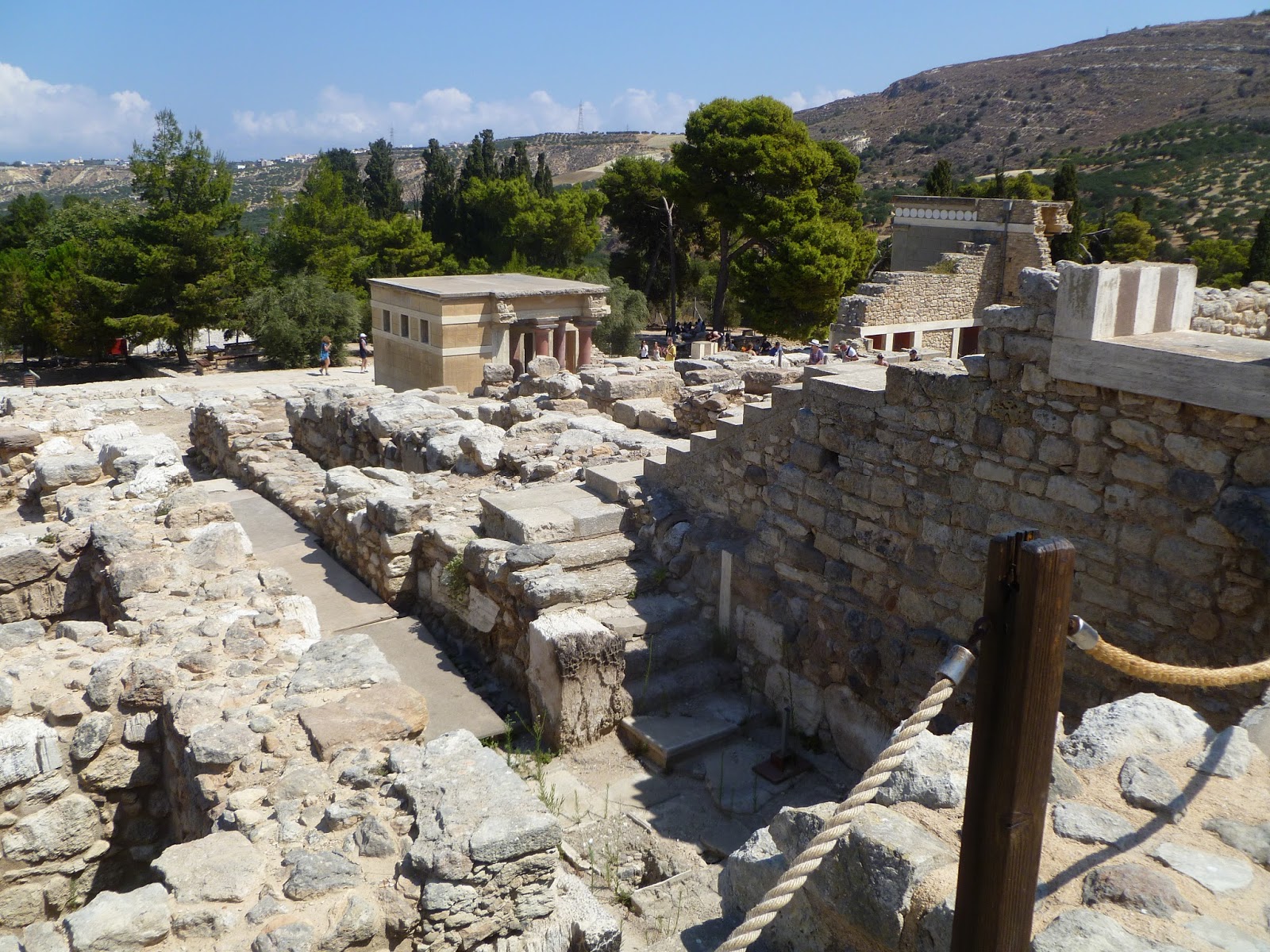 We took the bus into Heraklion today and did a city tour as always. This gave us an idea where the museums were, and we stopped off at the Minoan Palace of Knossos. It is believed to be more than 7,000 years old. 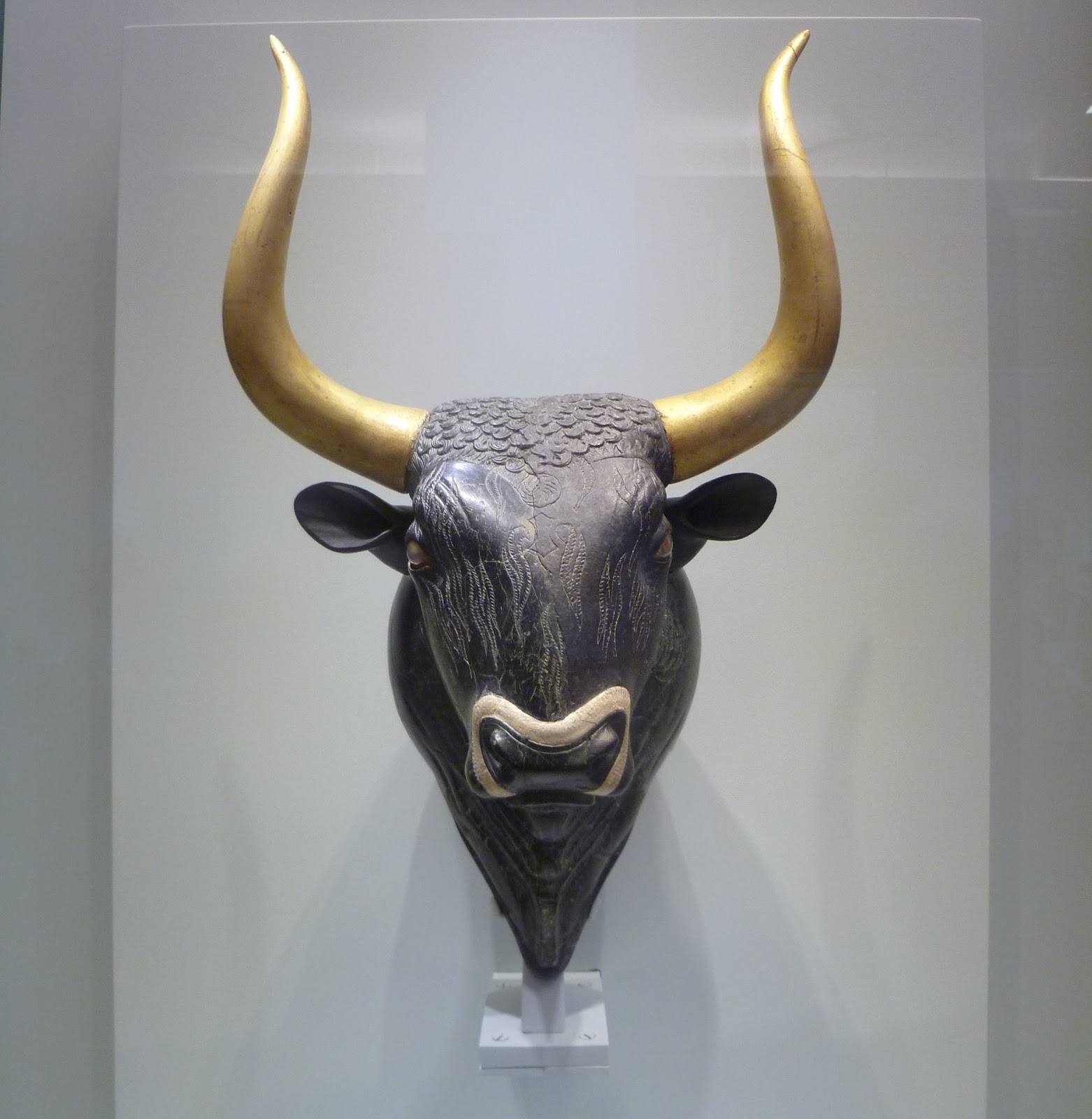 We went back to Heraklion to visit the History museum.
They had an exhibition of WW2 and M wanted to see if the information about his father's time on Crete would be mentioned.

I liked the way the art had developed over the centuries. These two bulls show the development in a few centuries. Look at the amount of detail in the second sculpture. 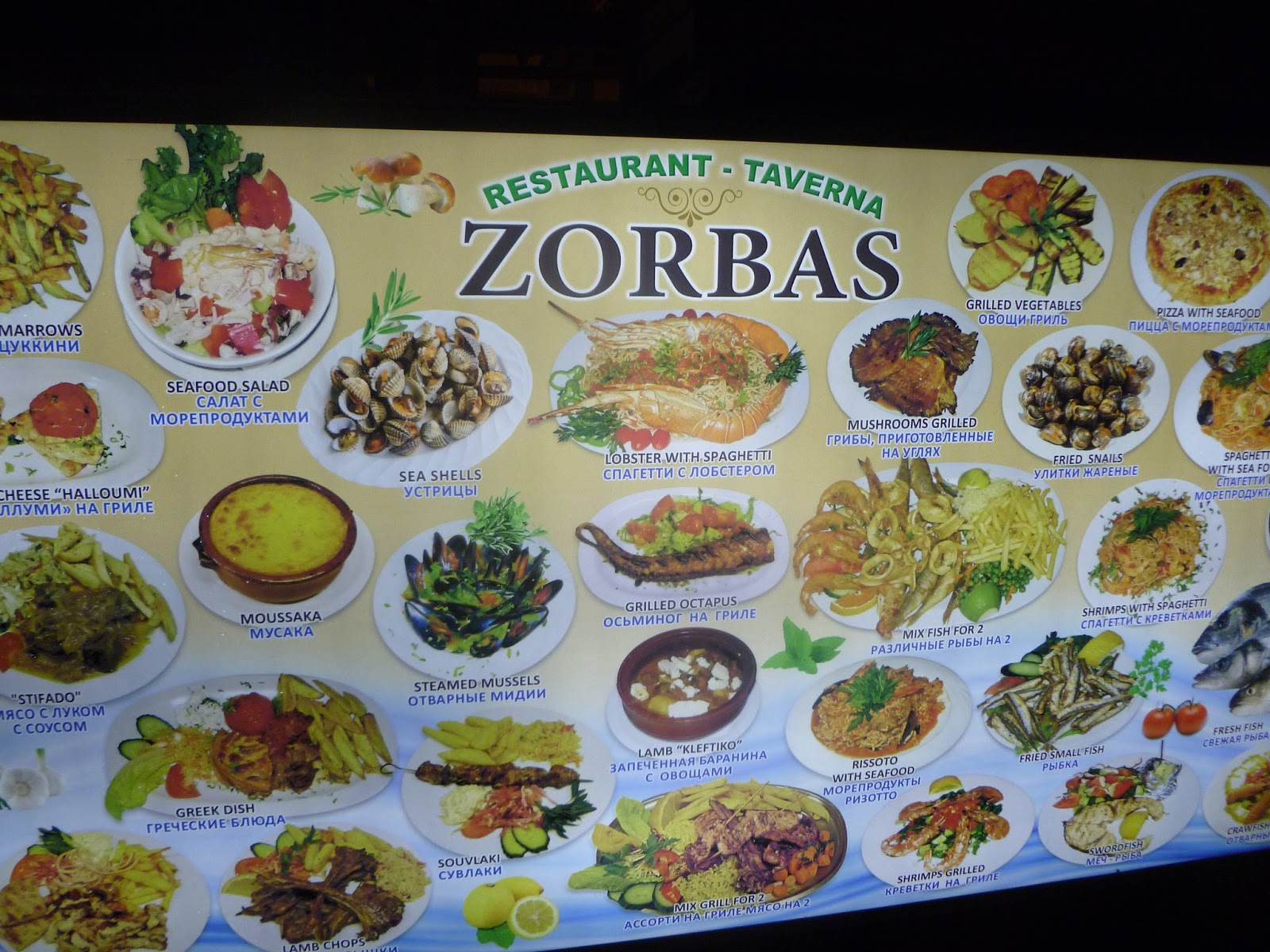 Today we decided to be lazy and spent the day on the beach, reading books and swimming. There were many restaurants to choose from, and we went with the cliched Zorbas, where the food was excellent and the man who was Front-of-House was  great.

After our lazy day we went up into the hills above Heraklion to the town of Arkalochori, about 33 kilometres to the south. We had a couple of hours to potter around before the bus would return, so we stopped to have a coffee first as it was quite hot. We found a music cafe which made fabulous iced coffees and decorated them beautifully. I loved the planted bikes around the streets too. 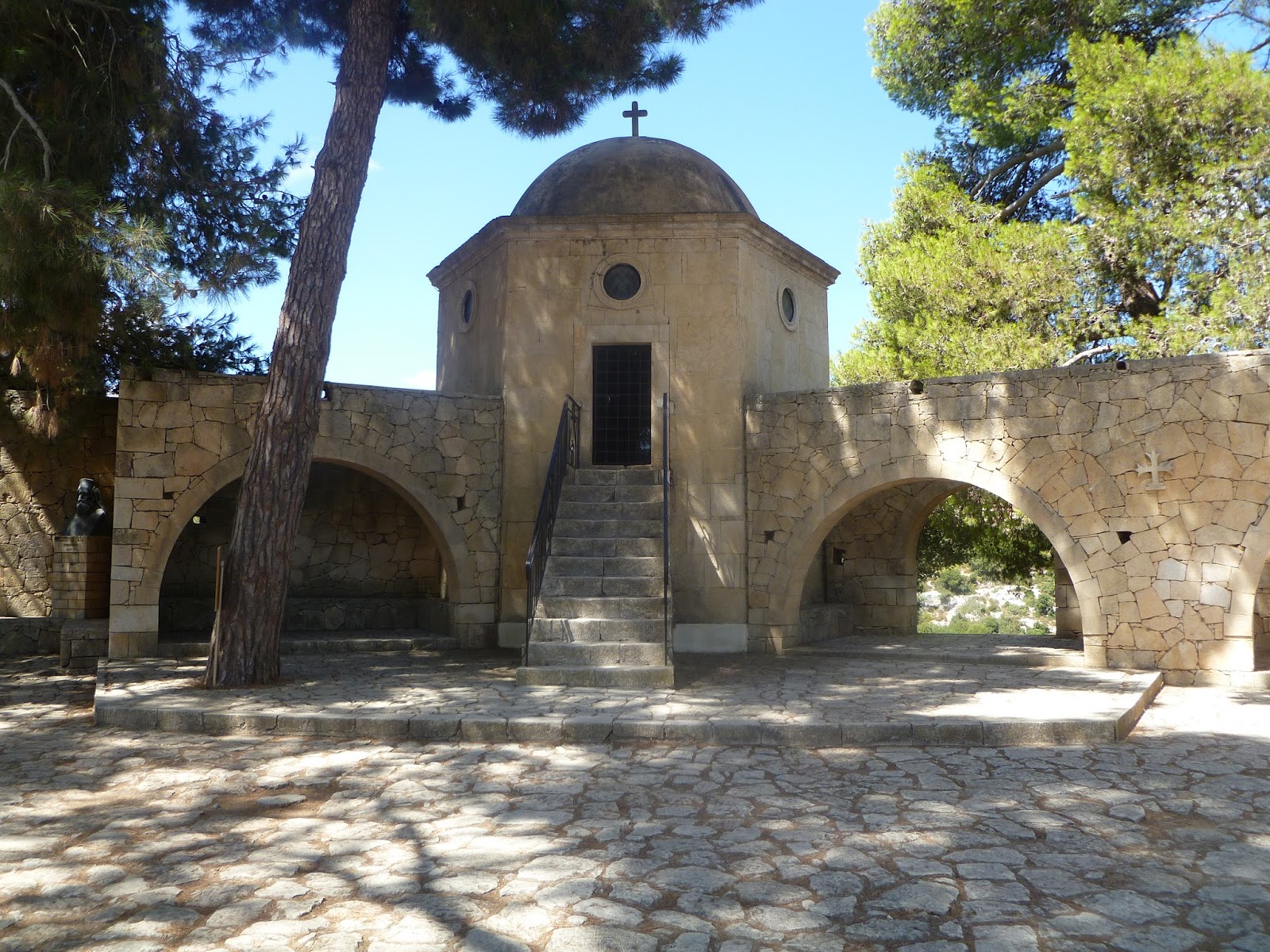 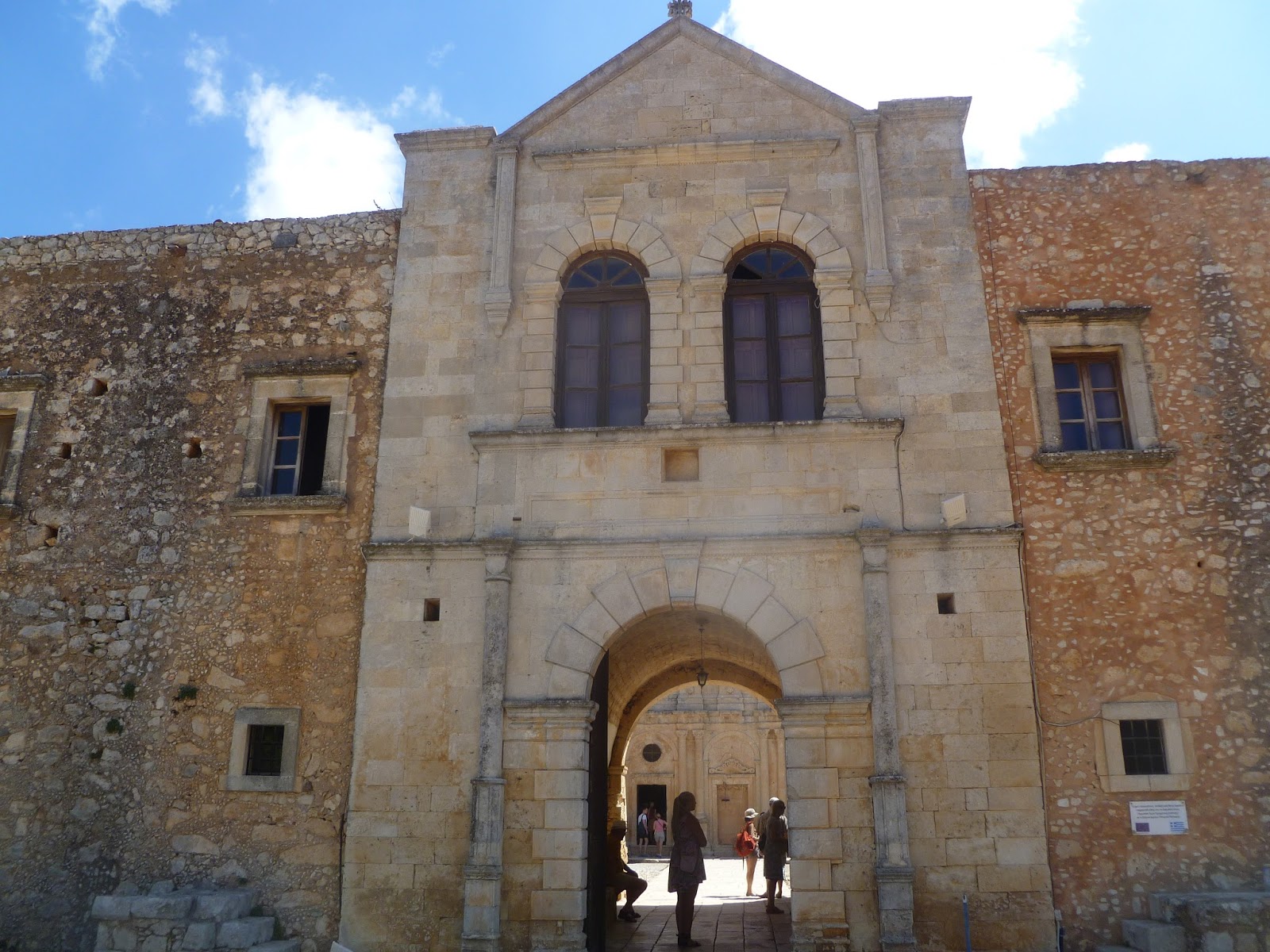 Earlier in the week we had booked a trip to West Crete, so we got up and wandered up to the bus stop where we found the coach. We first visited Arkadiou, a monastery in the mountains. It took a couple of hours to get there, along tortuous roads, and the views were fantastic. The monastery itself was important in the Cretan history in the war against the Turkish invasion. The martyrs bones are in an ossuary in the grounds. 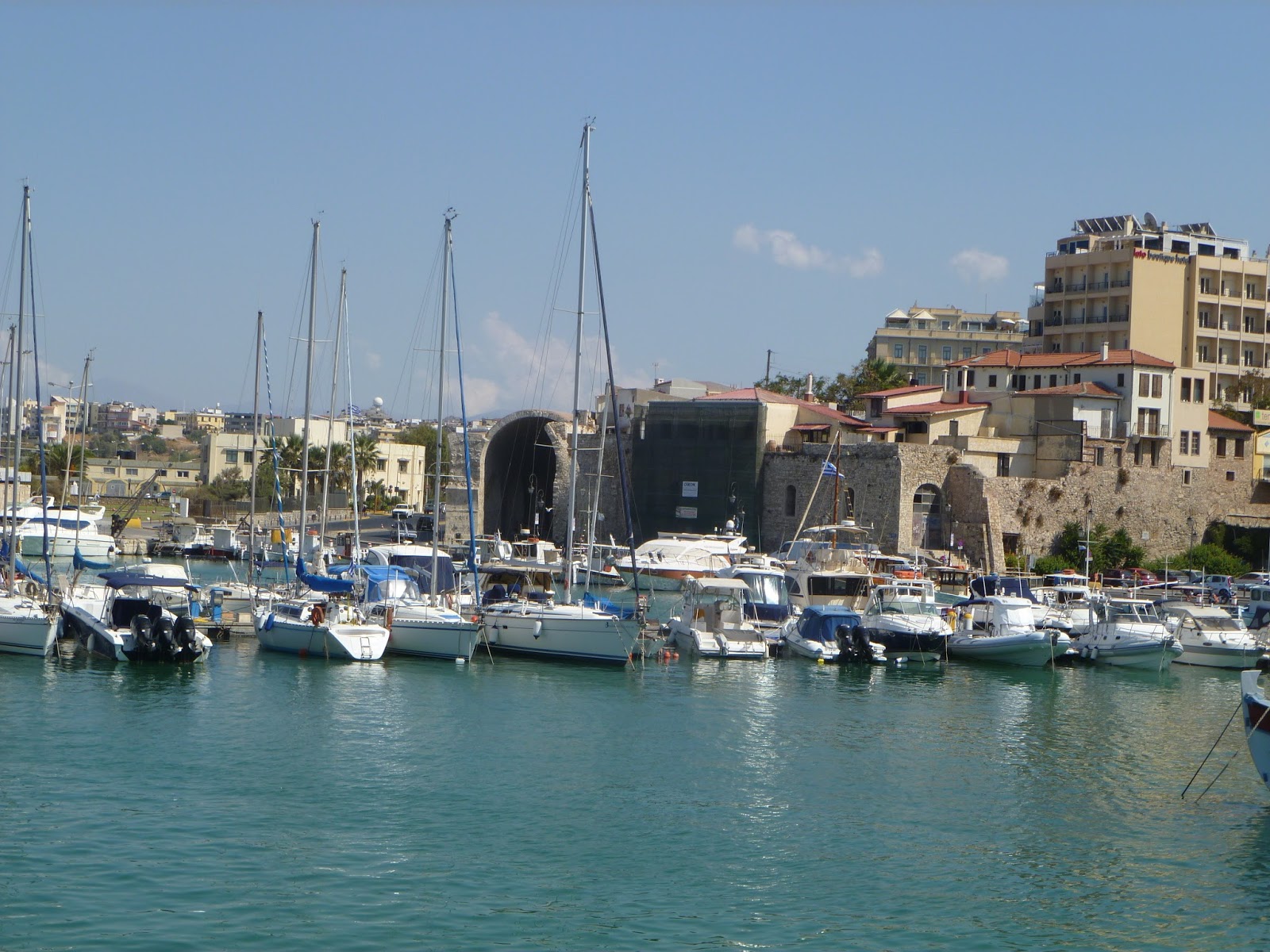 We then went to look around the towns of Chania and Rethymno, which were full of Venetians remains, and very picturesque. I was hoping to catch up with Marisa in Chania, but the bus tour and her bus time didn't correspond, so it was not to be. 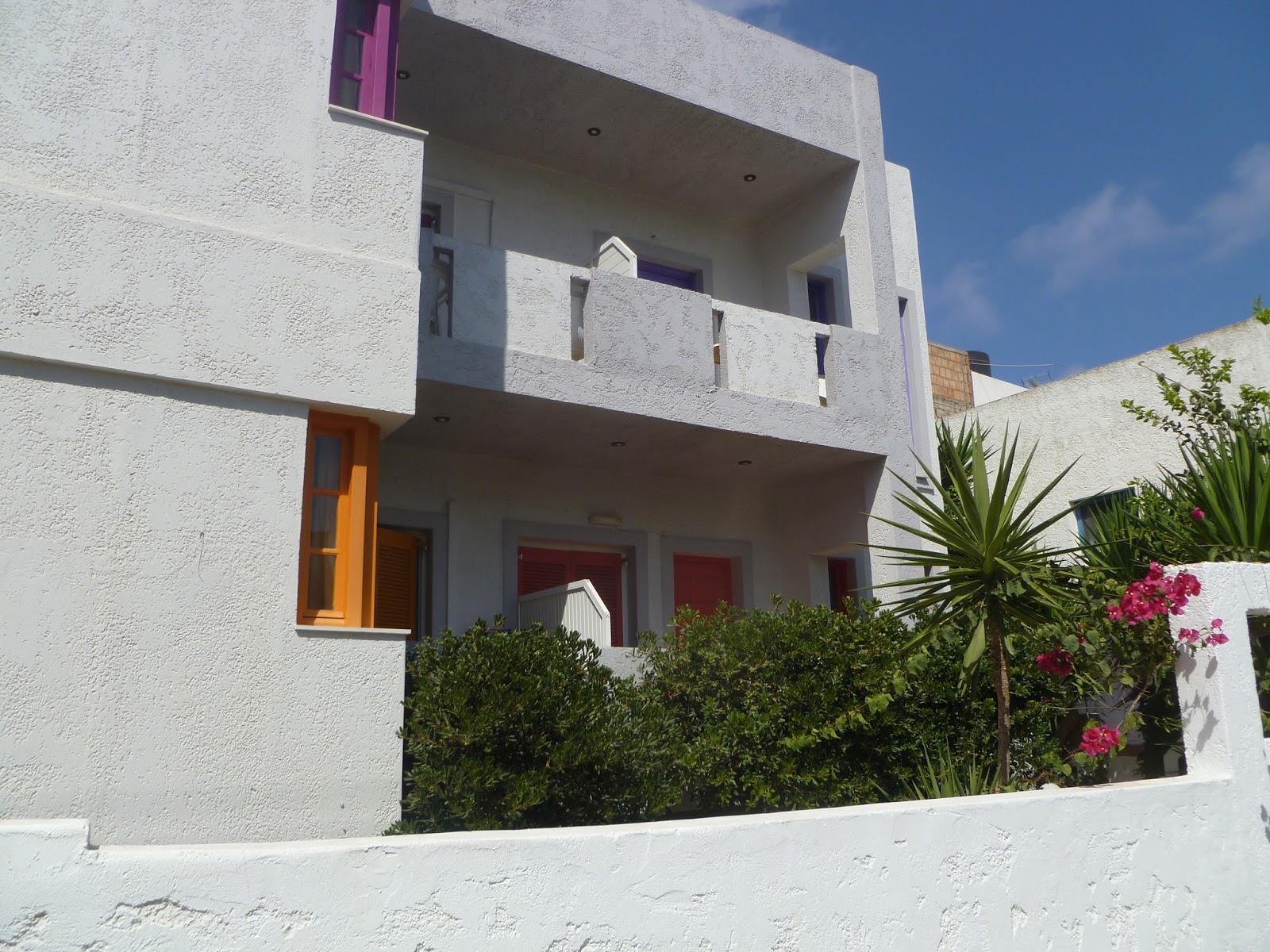 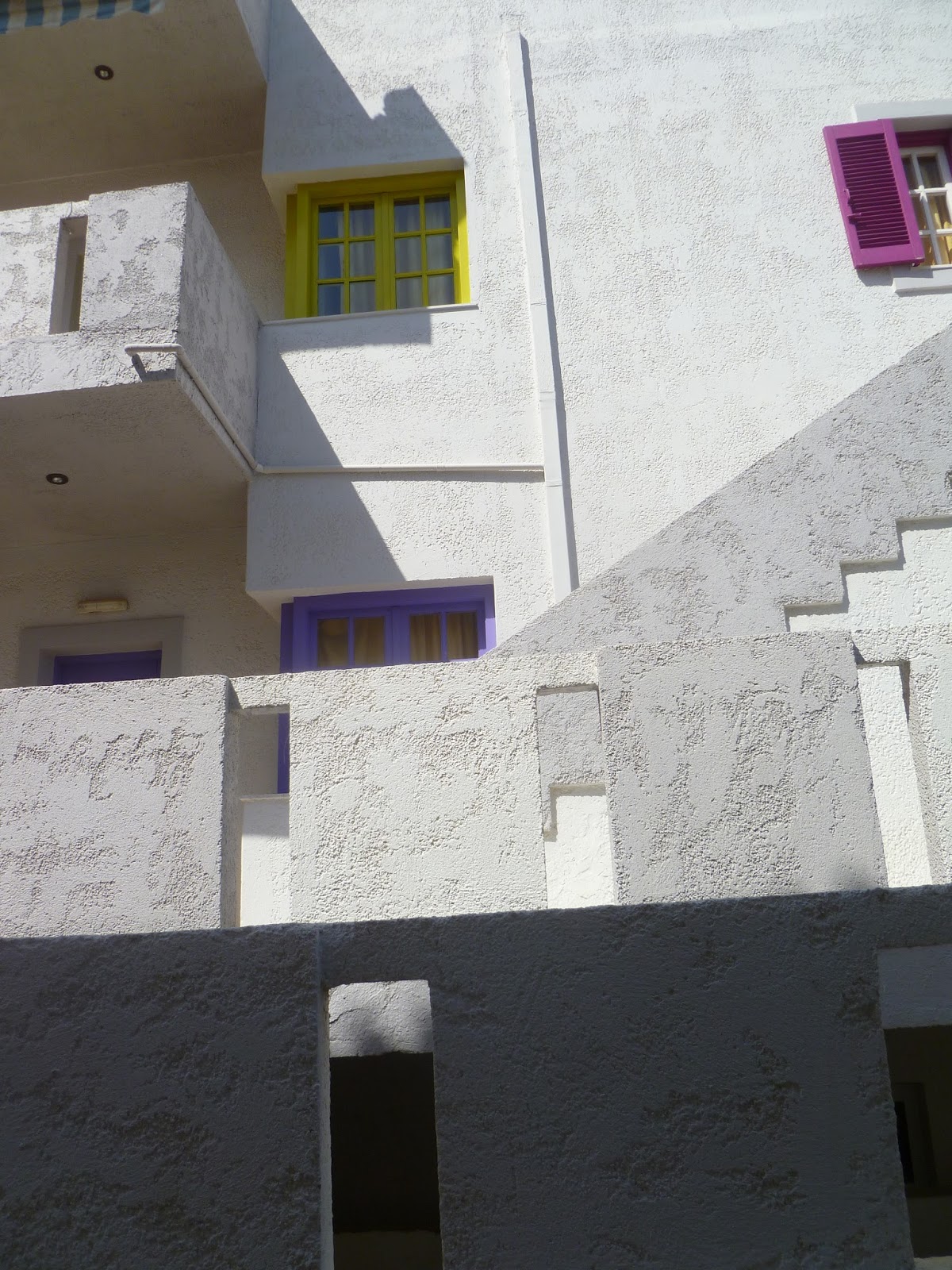 As today was our last day, we went out and about in Agia Pelagia, buying souvenirs and taking photos of the area. There was a cute apartment block with all the windows painted in different colours. I thought it was cute. There were many pomegranate and lime trees around, which looked almost ready to pick.
We left the island at stupid O'clock and arrived in London around two thirty in the morning. After getting from the South to the North terminal we found our hotel, and crashed.

Home- and not a minute too soon. Our header tank in the loft decided to spring a leak and came through the bedroom ceiling. If it had happened when we were away..... It doesn't bear thinking about! We thought that M had sorted the problem until it started dripping again at 2 in the morning!! We will call the plumber in the morning.