Getting ever closer to the end....

It felt cold today, for the first time. Although we have had our fire on at night for a few weeks now, we decided to put the underfloor heating on in the bathrooms. You can tell - we now have to negotiate past the cats if we want to use the loo!

Today was windy  and the trees are suddenly starting to look bare. The trees in our car park still have a few leaves and they don't quite look as though the winter has arrived yet.

One of out students gave us a present of truffles today. They were amazing- a real HIT of chocolate. I think I might buy some more to have wrapped up as extra gifts for unexpected visitors. This week isn't as wet as last week, so it is less of a chore to get out and about.

This morning I had time to take some pictures on my way in to work. The view changes every day, so it is nice to capture it when possible.

I was looking forward to this afternoon. I went through to play with next door's kittens, Nina and Nala. They are a bit like stripy Siamese- but little monsters. I had forgotten how much devastation they can cause in a house! They have such sharp teeth and claws too. I was happy to go back and give my big girls a hug, I can tell you.

I spent a lot of today helping Lorraine unpacking her things at the new flat. As she had been working all day and teaching in the evening, she hadn't had a lot of time to organise herself- and it really is easier with an extra pair of hands or so. In the evening, I popped round next door with a book on kittens that I found when I was clearing out a cupboard. This time the terrors had worn themselves out and were fast asleep.

Today I fed Armagnac to the Christmas cake, made some Cock-a leekie soup and prepared my haggis. It's St Andrew's day, celebrated in Scottish, and Greek, households around the world, so I had to do my bit:-) We were only feeding the family and Miles, so I didn't have to go overboard. Afterwards we watched a programme that we had recorded about the occupation of the islands. We knew that Miles would want to see it, and he had been away when it was shown.

I put out the advent calendar on the top of the cupboard in the sitting room and found a few candles. having painted the floor, we were conscious of the fact that the rest of the paintwork looked a bit yellow. As this week the students had exams, I wasn't needed, so I took time off to help M paint the rest.

There was not so much preparation needed, but I had to take all the books off the bookshelves and find a home for them until we could put everything back.


The white looks nice and fresh and it will really brighten up the dining-room, which has no natural light. I hang a mirror opposite the big windows to try to help.

I had forgotten how many doors opened into the dining-room. There is the one to the hallway, one to the kitchen, and one to the utility room. That doesn't include the enormous  Victorian double doors which separate the dining and sitting rooms. We don't normally close them, but they still looked yellow! Now they are brilliant white:-) 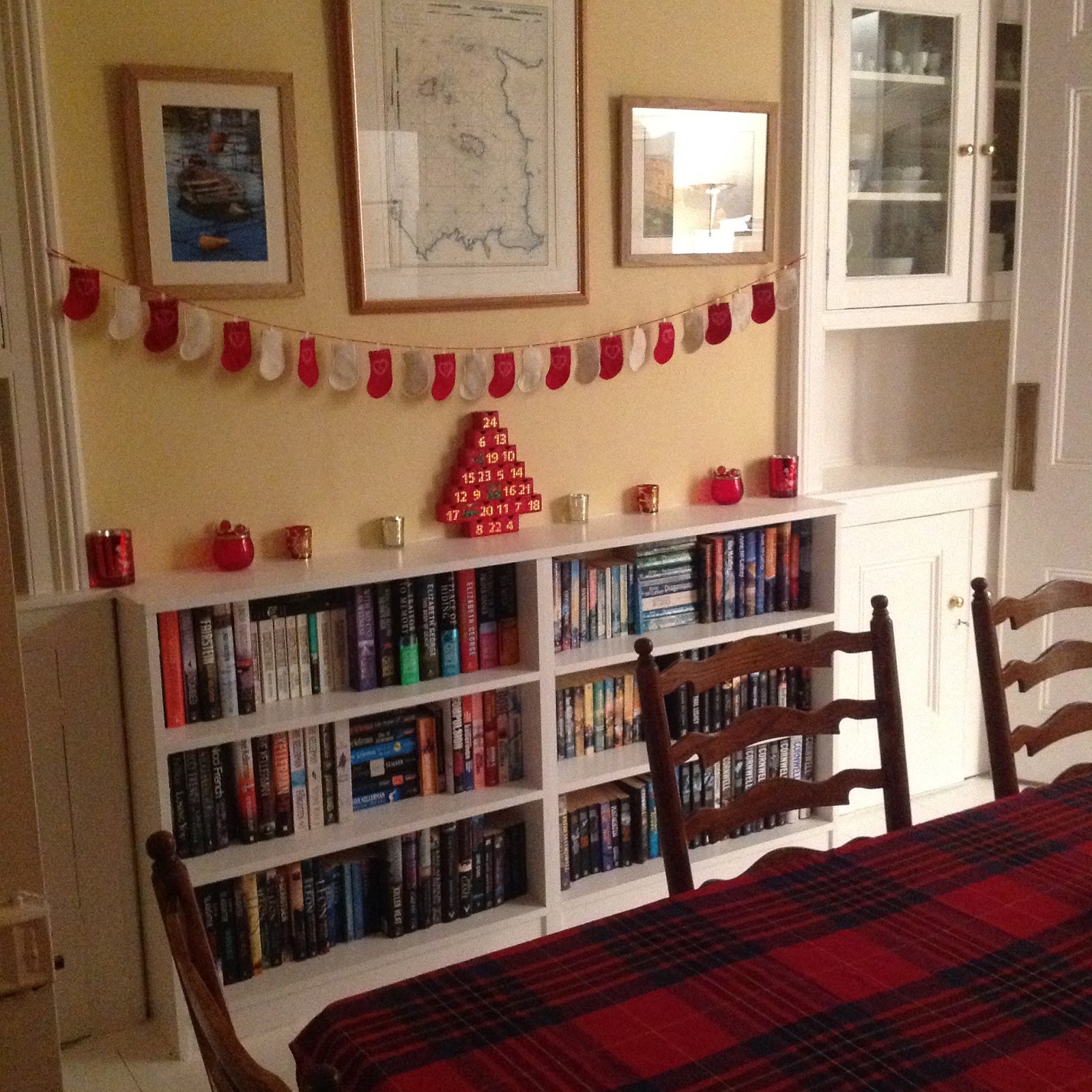 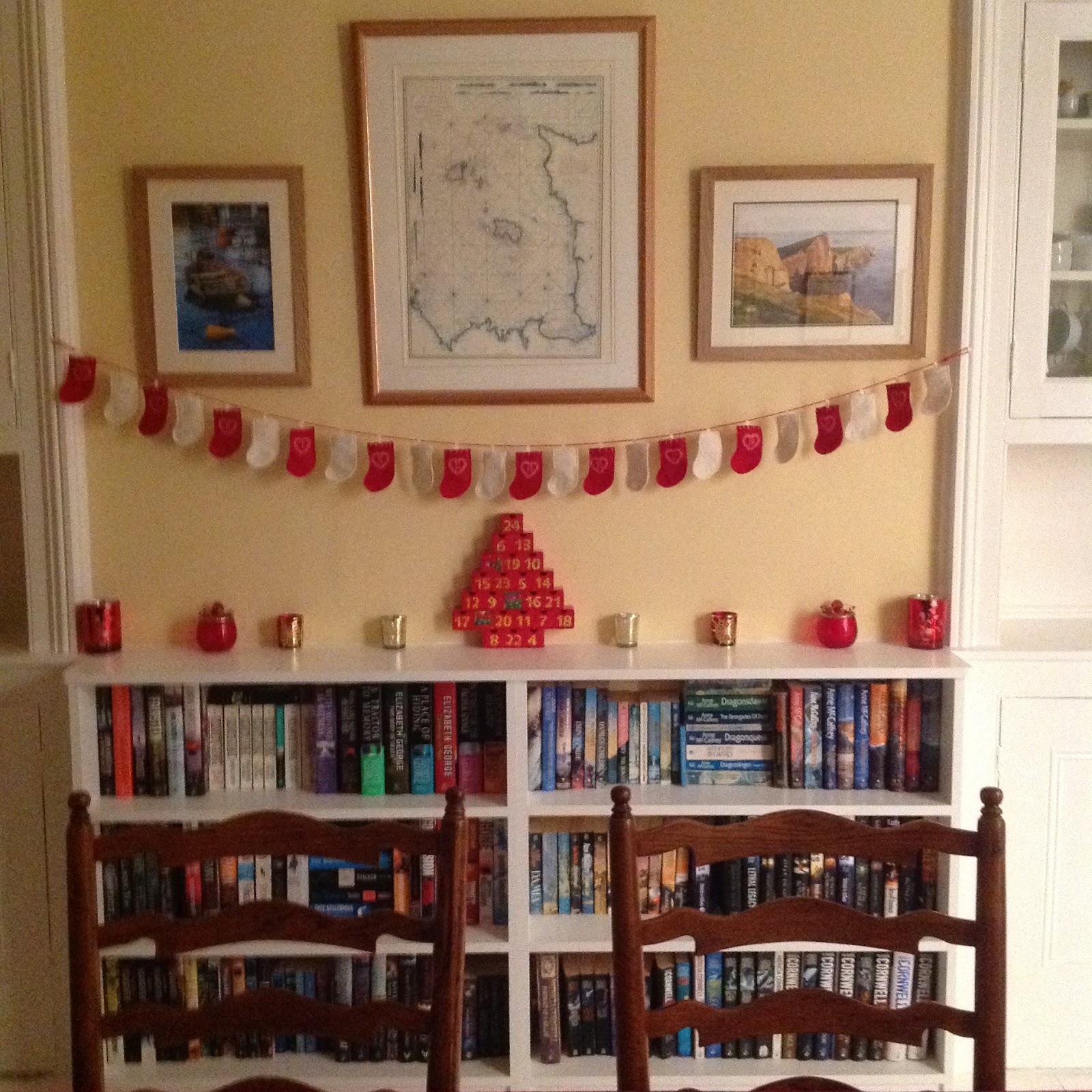 Today I'm going to put the room back together again. I have changed the picture on the wall so that I could hang up the advent stocking. I then started looking for all my tea-light holders and candlesticks. The ones in here won't be lit until Christmas morning, but they look festive. I am holding off on the tree, as Ebony will just climb in it. 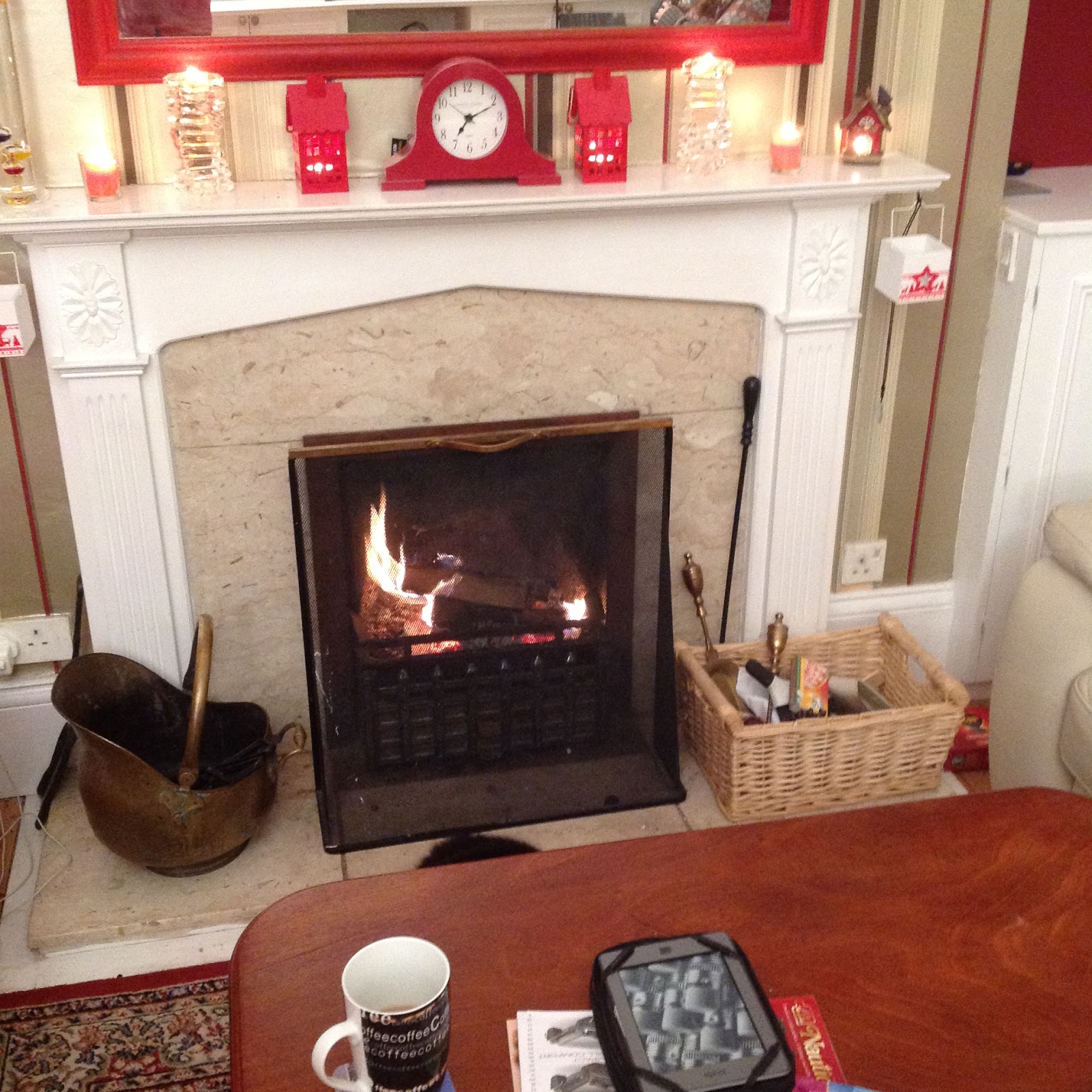 Cairis and her father have gone to The Opera house to see a comedian. I don't find him funny- but my sense of humour is different from theirs. I lit the fire and stayed in, chatting on Facebook and curled up by the fire, with lots of candles on the mantlepiece. 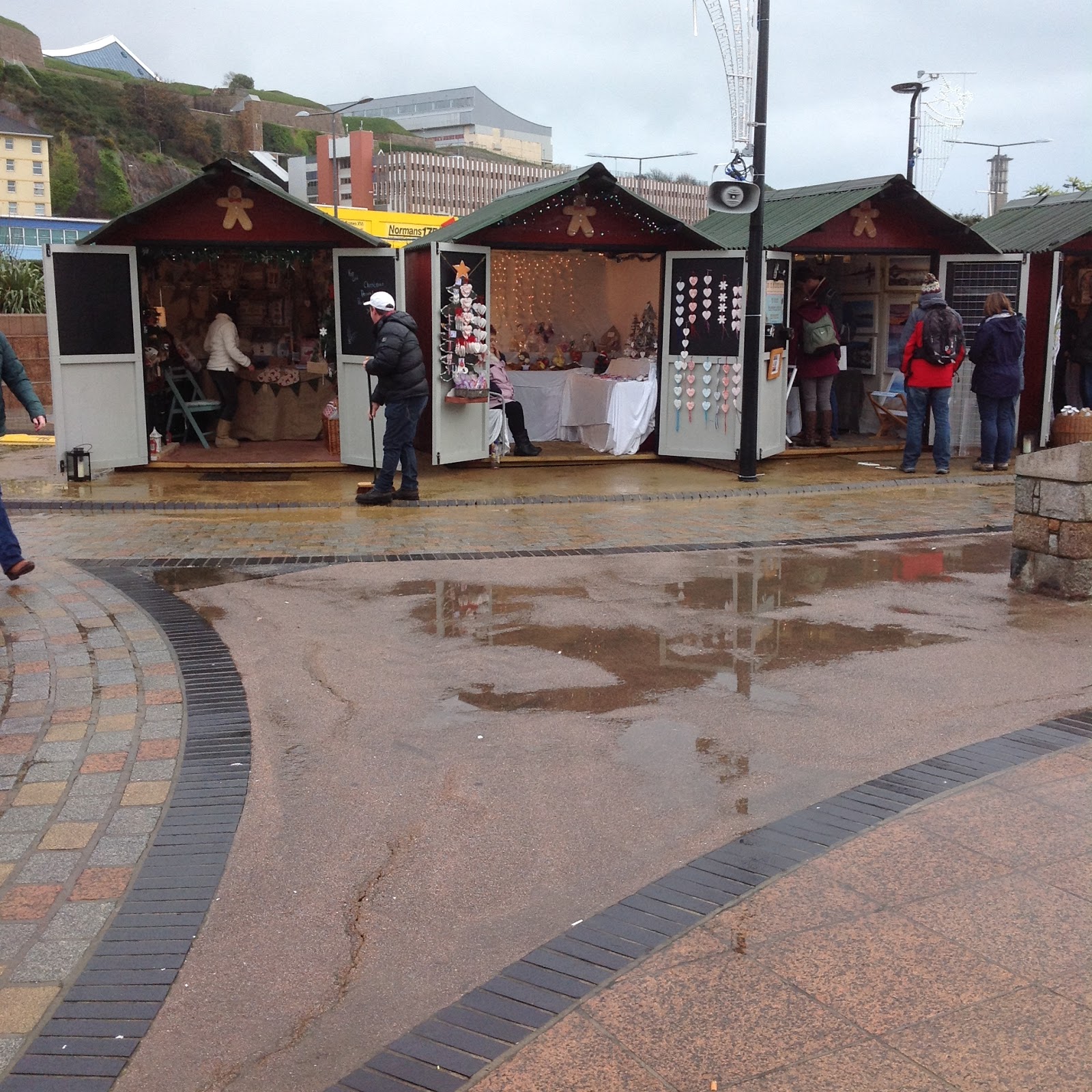 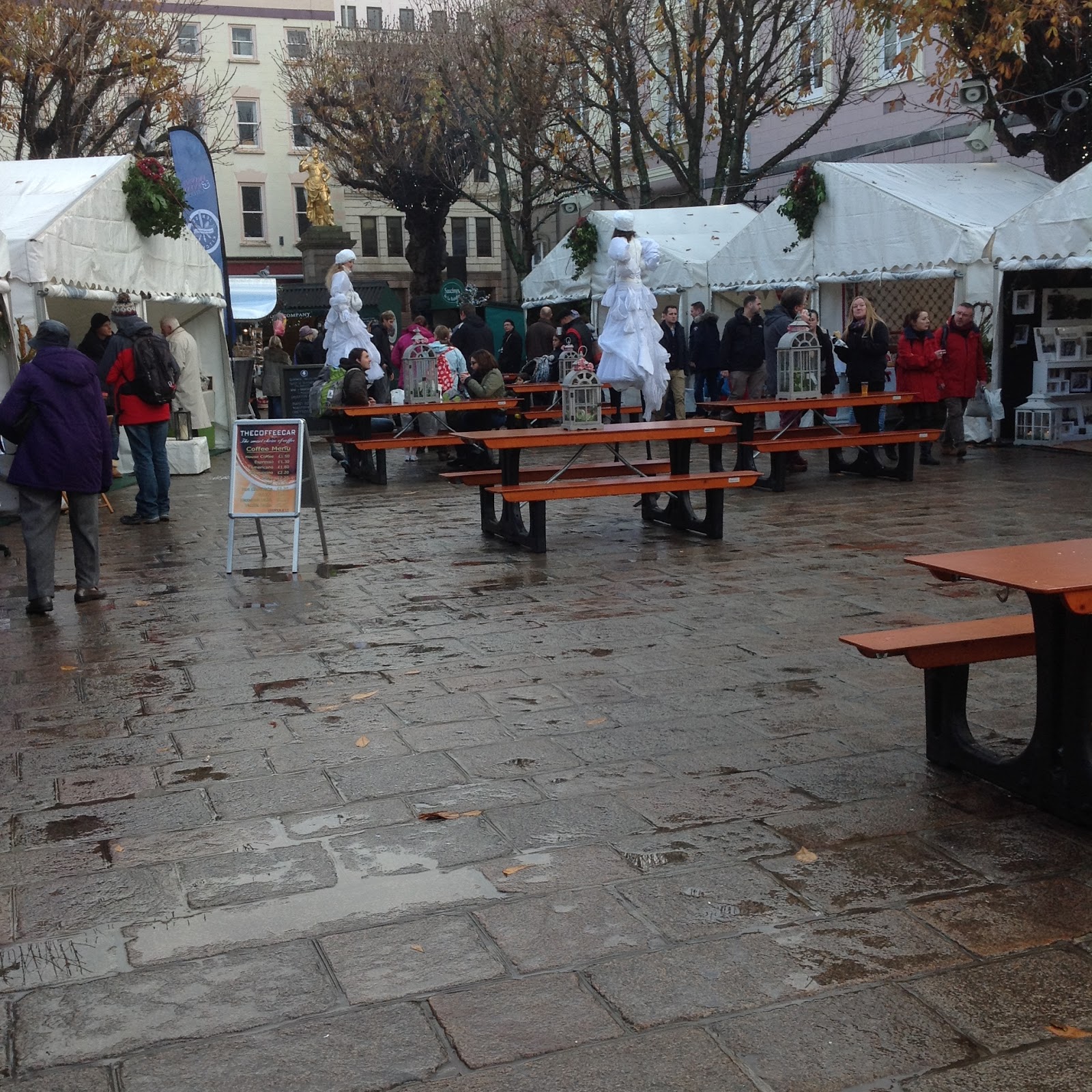 Today is the day of my office party, and we are also saying goodbye to Caroline the Office Manager, who has found a new job. In the afternoon I wandered down to have a look at the markets. We have the Vier Marche and the French Market with traders from Jersey and Normandy. There is also the craft market in the Royal Square. I might need to come back tomorrow for a better look. 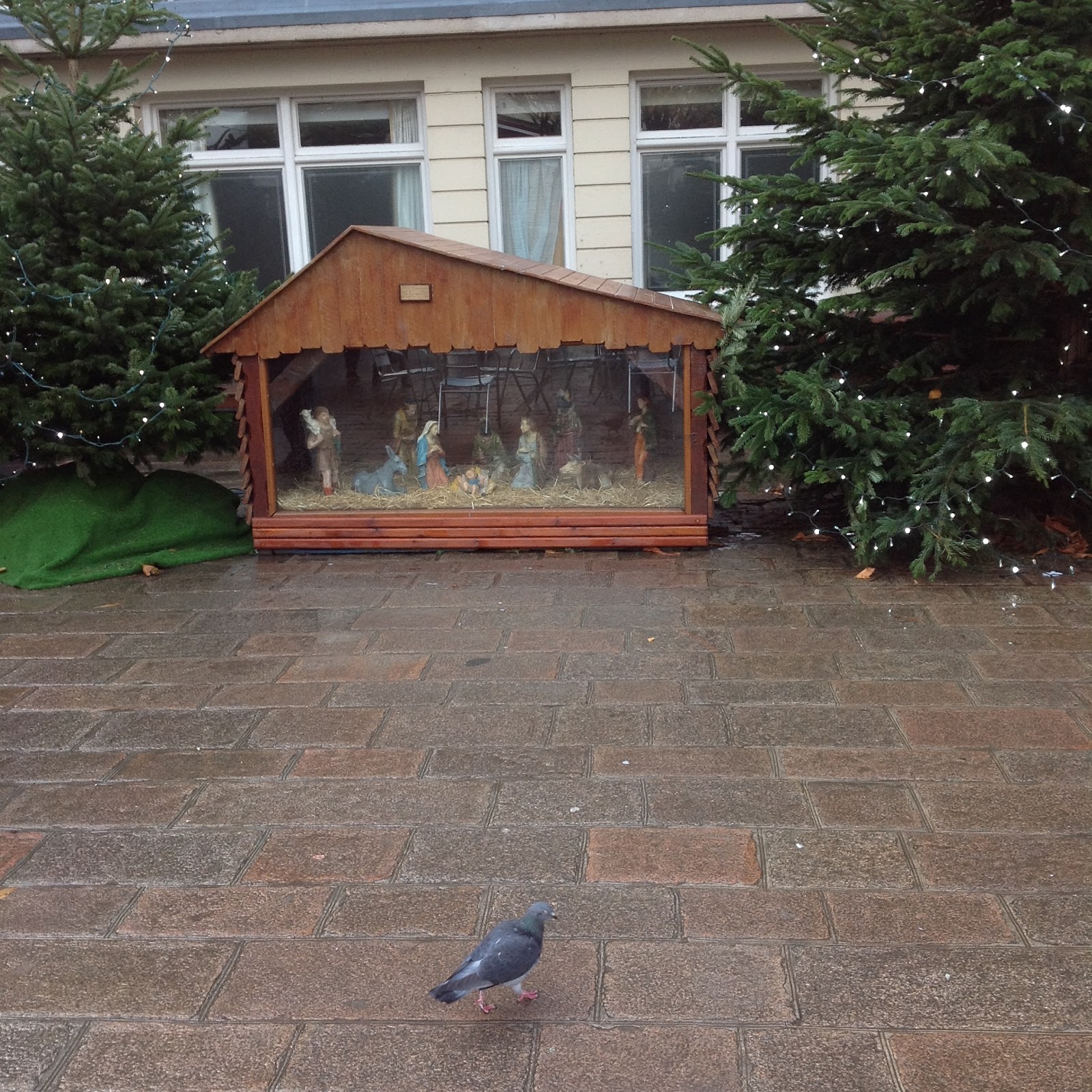 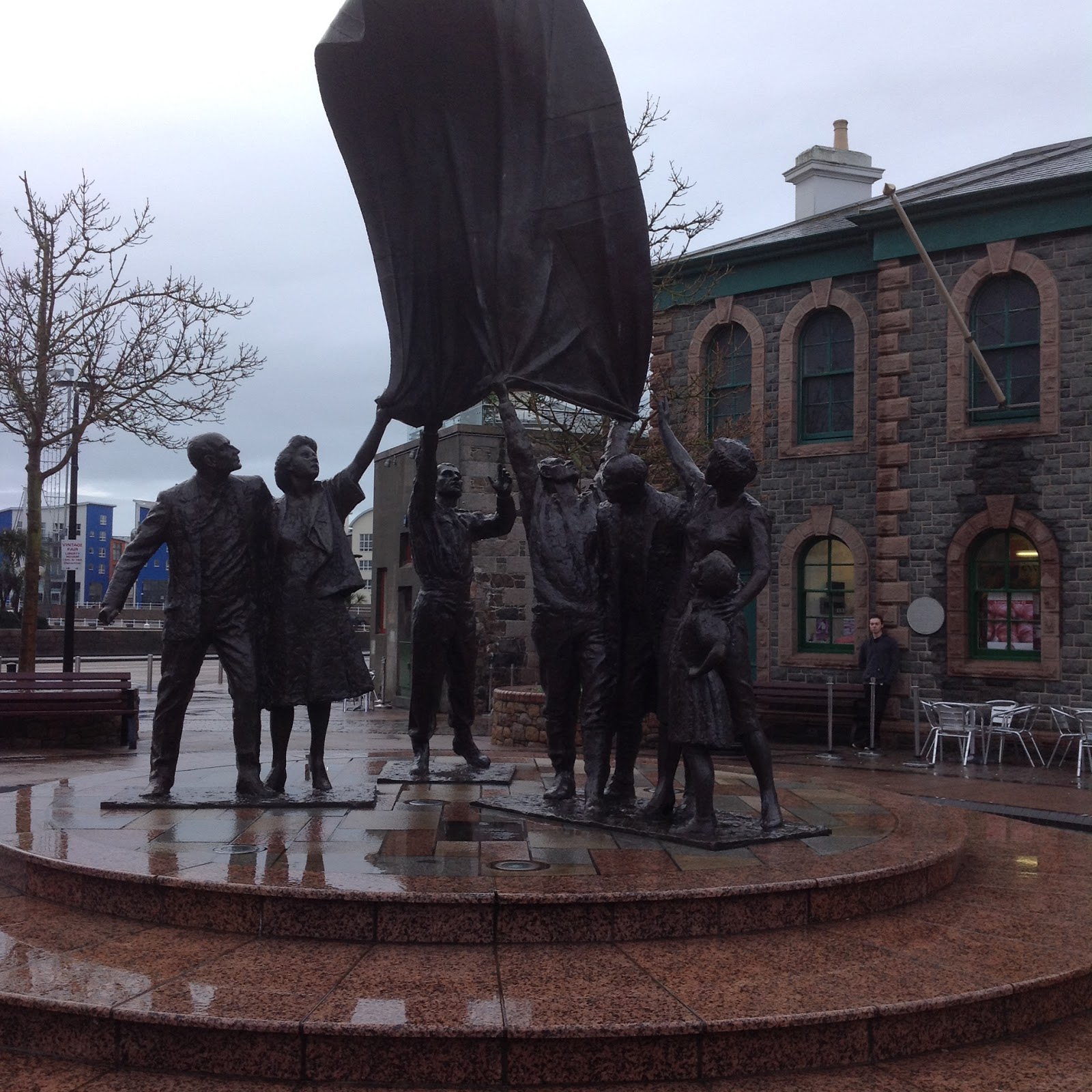 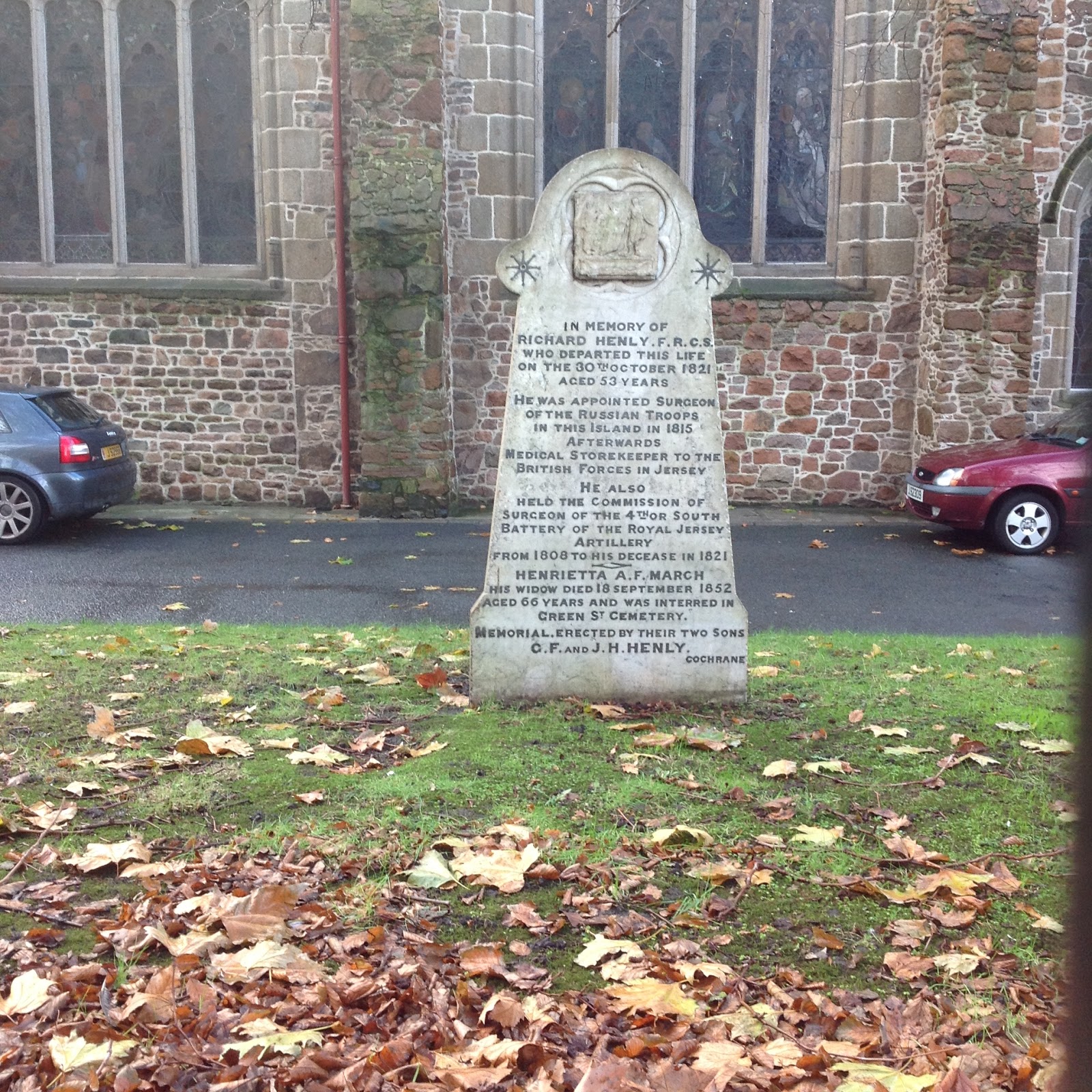 I walked back down to do some shopping at the French market. They sell the most wonderful cheeses, saucissons and soaps. I also got some solid honey and some frangipane biscuits. While walking between the markets I noticed a headstone in the Town Church which I had never seen before. I didn't even know that we had had the Russian Army stationed in the island in the 1800s. The man had an interesting career, but his wife wasn't buried with him- maybe she wasn't important enough to have a headstone in the churchyard. I also took a picture of the statue for liberation in front of the hotel which was Gestapo headquarters during the occupation.
Its the second Sunday in Advent- so I put my wreath on the front door too. This is my last week of work for the year. All our students will be going home on Friday or Saturday.  There are only a few weeks left until 2015. I wonder what will be in store for us then.